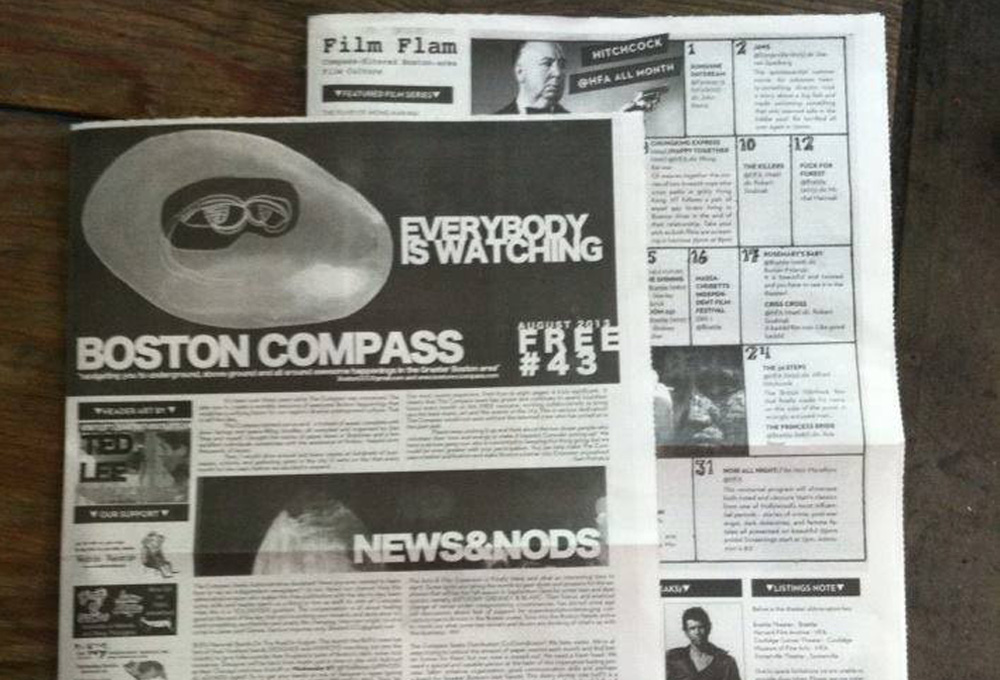 Sam Potrykus calls from the road, where he is touring with local noise punk heroes Guerilla Toss. The band had played another packed show at a house in Baltimore the night before, and Potrykus, typically in very positive spirits, still seems giddy from the experience. “The place they played has been really good to Boston bands like Speedy Ortiz and Grass Is Green,” he says. “We’re cool with them because we hook a lot of the same bands up who tour through here when they hit Boston.”

Even when he is away from home, Potrykus and his Boston Compass counterparts make it a priority to spread the love about Boston, its creative exuberance, and its radical music culture. Potrykus, 26, along with co-founder Daniel Shea, started the Boston Countercultural Compass in early 2010 after a history of booking shows and playing in local band Needy Visions together. “I was inspired by a book I was reading by a guy who started up a zine in San Francisco in the ’60s called ‘Mojo Navigator,'” he says. “Dan and I were actually on the way to a Needy Visions rehearsal and we came up with the idea to do something similar in Boston.”

What started as a one-sheet listing of shows from Boston’s underground has now evolved into a multiple page newspaper, filled with listings, features on art and film, comics, and music reviews. Potrykus excitedly says how making the Compass a group effort has “opened my eyes to how local music is just one cast of characters within the local creative community. There are so many people doing cool things in art and film that I’m happy we can now spread the word about.” And a group effort it is. In addition to Potrykus, who is editor-in-chief, and Shea, who serves as managing editor, the Boston Compass is fueled by the work of a few dozen volunteer staffers — everyone from writers and editors, to artists and designers, to a dedicated crew of distribution folks. They continue to welcome new helpers to join their team.

This month marks the 50th issue of The Boston Compass, and as always, new ideas continue to shape its future. The paper is now one component of many that functions under the non-profit Boston Hassle organization, which also has a like-minded website called The Boston Hassle and books more than 100 local shows a year. As is, advertisements help ease the cost to print and distribute the publication, but tend to only cover about one third of the cost. To ensure the The Compass’ sustainability, they have now kicked off a Patron21 campaign, which allows readers to pledge a certain amount of money every month to help the paper continue to grow. The paper itself is free, a labor of love, but even with the slightest drop in the hat from readers and supporters, the cost to produce may not hit its creators’ pockets so hard.

Fifty issues is a milestone to be proud of, but what’s even greater cause for celebration is the effect organizations like Boston Compass have had on a booming Boston scene. The paper is now distributed in more locations than ever, from record stores and cafes, to the bars and tables at local shows, to a PDF version on the Boston Hassle website. Along with it, bands who got a start playing local small venues and basements, like Quilt, Krill, and Happy Jawbone Family Band have now found audiences across the country. Potrykus is pleased by how the mission of the Compass has grown, and hopes that in another 50 issues, its progress is reflected by the scene that surrounds it. “Boston music is in a really good spot right now,” he says. “I think our biggest goal is to just continue to spread it.”

Enter to win a pair of tickets to attend The Hess Collection Seminar and Dinner as part of Boston Wine Festival 2018 at the Boston Harbor Hotel on Wednesday, March 14th. END_OF_DOCUMENT_TOKEN_TO_BE_REPLACED

Artists for Humanity Co-founder Jason Talbot and Major Gifts Director Emily Smaldon were in studio this morning with Mallory Bazinet, Event Manager for GrandTen Distilling. Jason and Mallory talked about The Contemporaries, their upcoming event to launch a new patron group for young professionals. Click here to join them on Thursday, August 17! END_OF_DOCUMENT_TOKEN_TO_BE_REPLACED

Aida Villarreal-Licona is the Events Coordinator for SoWa Boston’s Art & Design District. She was in today to talk about their holiday shopping event this Thursday December 15 from 4-8 p.m. at 450 Harrison Avenue. A great opportunity to help local artists and get some holiday shopping done! END_OF_DOCUMENT_TOKEN_TO_BE_REPLACED

Natalie Lemle was in to talk about ArtLifting, a program that aids homeless and disabled artists. Currently, 72 artists in 11 states are receiving 55% of all profits from your purchase of their artwork and photography. Click “more” to hear my chat with Natalie and to see work from one of the artists. END_OF_DOCUMENT_TOKEN_TO_BE_REPLACED

Perry Eaton writes for Boston.com. Perry Eaton talks on the radio with me from time to time. Today, he talked to me about what he’s been listening to and some upcoming shows and festivals worth checking out. Click here to read more. END_OF_DOCUMENT_TOKEN_TO_BE_REPLACED

Boston band Funeral Advantage is Tyler Kershaw. And Tyler Kershaw had a fun childhood, so it seems. END_OF_DOCUMENT_TOKEN_TO_BE_REPLACED

Perry put me on to daephne and the album blew my mind. END_OF_DOCUMENT_TOKEN_TO_BE_REPLACED

It’s no secret that Bostonians like to show their Patriot pride with tattoos. Who can forget the awesome guy who got that sweet Bill Belichick arm tattoo? Or the less-awesome guy who showed off his full-head Tom Brady helmet tattoo in his mugshot? END_OF_DOCUMENT_TOKEN_TO_BE_REPLACED