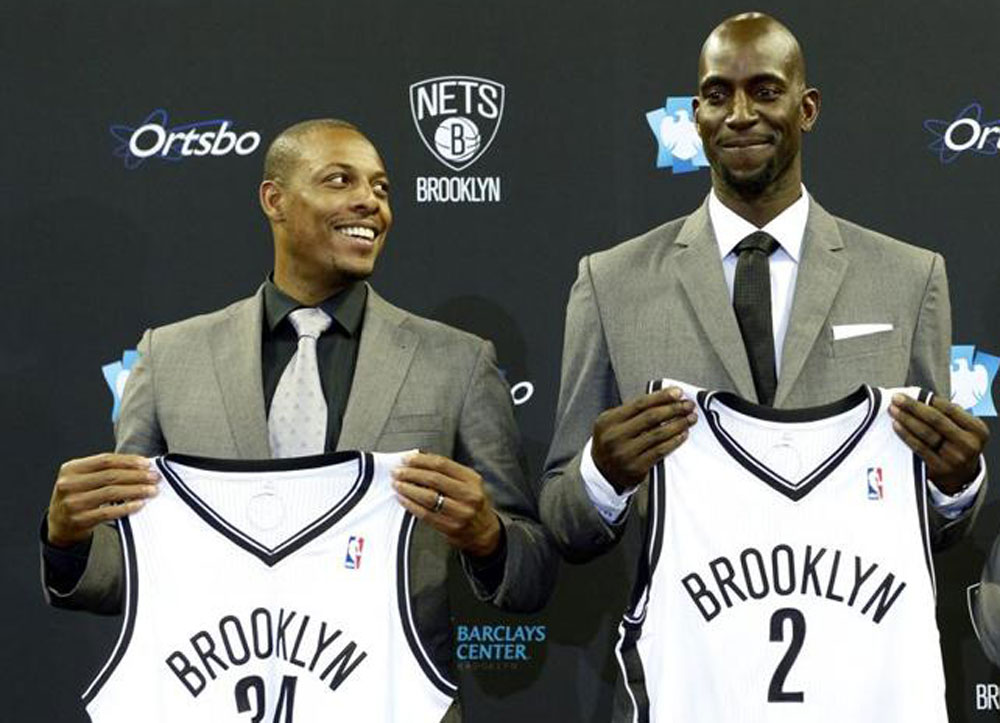 The homecoming is upon us. Sunday night marks the return of Paul Pierce and Kevin Garnett to Boston for the first time since being traded away by the Celtics last June. With a rebuilding Celtics squad having lost 15 of its last 18 games, Celtics fans don’t have much to look forward to, beyond the 2014 NBA Draft. Due to this, Brooklyn’s visit Sunday night marks what should be the most anticipated game at the TD Garden this season.

As we look ahead to what will be an emotional reunion, some fans may have second thoughts about whether Boston made the right move to send their beloved stars packing before the season started, instead of letting them finish their career in green. Rest assured though, the timing was right. Here are five reasons Celtics fans should be grateful that Danny Ainge made the decision to deal away Kevin Garnett and Paul Pierce before this season began.

We’ll start with the most obvious choice. Over the summer, Ainge’s haul in the deal for the two Boston icons didn’t look like much. He took on some bad contracts and three future first round picks from Brooklyn. However, things have not panned out well in Brooklyn this season. Thanks to injuries and chemistry issues, the Nets, instead of being a top seed in the Eastern Conference, are fighting for their playoff lives. As the decade wears on and Pierce and Garnett approach retirement, Brooklyn’s long-term future looks more vulnerable than ever. Their future first round picks could very well be lottery picks, which would help the Celtics build their team for years to come. Months later, it’s now clear Boston won the deal in a landslide. It’s also evident that Ainge would have never been able to find a better offer if he had opted to hold onto his stars any longer.
Let’s face it: Without a healthy Rajon Rondo, the team wasn’t going anywhere this season, with or without Pierce and Garnett. Holding onto the fan favorites may have helped fill the Garden, but it would have been a tough situation to swallow for everyone involved. Ainge wouldn’t be happy knowing the Celtics wouldn’t be bad enough on the floor to get a good draft pick with the perennial All-Stars. Meanwhile, Pierce and Garnett certainly wouldn’t have been thrilled to have to fight tooth and nail to just make the postseason, all while taking orders from a new coach in Brad Stevens who could pass for a rookie in most NBA arenas.
Pierce and Garnett go way back. Even before they became NBA stars, they played AAU ball together back in the ’90s. Pierce was the one who convinced Garnett to come to Boston back in 2007, helping to form a new Big Three. The guys are lifelong friends. So when the possibility of a Pierce trade arose this summer, it created an awkward situation. Would Garnett want to stay in Boston without Pierce? Would the big man just retire, leaving Boston with no return? That was a real possibility. Luckily, Ainge found a team willing to take both players on and give back some value in return. Getting traded and starting over is hard to do, but it’s a whole lot easier when you have a friend with you. Ainge did right making the deal when he did, knowing he had nearly no chance in finding a fair trade for both players that would satisfy all parties involved.
The departure of Doc Rivers and Ainge’s subsequent dealing of Garnett and Pierce this summer put a definitive end to the Big Three era. That’s a good thing for the legacy of Pierce and Garnett, as distance makes the heart grow fonder. It’s better to remember both guys at their peak or close to it, rather than as great players who labored through the tail end of their careers as a shadow of what they once were.
Despite a surprising start to the season, it didn’t take long for this new-look Celtics squad to flounder without Pierce and Garnett at the helm. After watching loss after loss in the past month, it’s hard not to gain an added appreciation of what Garnett and Pierce brought to the franchise. Had they been dealt separately, or during the season, a chance for this kind of perspective and a proper tribute may not have been possible. With the pair returning in tandem Sunday night though, Celtics fans will be able to give a worthwhile reception to the duo that helped bring Boston a 17th banner along with a decade of memories.