If young Bostonians appeared tired and ragged this past weekend, they may have been involved with the Boston 48 Hour Film Project, the city-wide challenge for indie filmmakers who enjoy making art and hate sleeping. Ben Guaraldi and Rachel Stacy, Boston’s citywide producers, say the event is a spectacle like no other.

Indie teams are assigned a genre, a line of dialogue and a prop on Friday night, and they have until 7:30pm on Sunday to write, cast, shoot and edit a short film. Guaraldi says Boston’s 48 Hour Film Project is one of the biggest Projects of its kind worldwide.

“We’re larger than New York, and larger than LA, maybe because there’s a lot more to do in film in those cities. An event like this requires an entirely committed weekend from filmmakers, and you can pull that off here.” Guaraldi says Boston’s indie film scene is marked by its diversity, which is illuminated in the wealth of submitted projects to 48HFP. “We get a diverse group of filmmakers because we cover a range of New England. Urban kids from the city, suburban, and even rural teams from out West or on the Cape,” Guaraldi tells us.

According to Guaraldi and Stacy, all creative aspects of filmmaking must take place in the 48 hour assigned period, including scriptwriting, rehearsing, sound design, editing, rendering, and the conception and recording of music.

This year, teams were assigned to make 5-7 minute films featuring a diary, a teacher character named either Jacqueline or Jeremiah Jones, and the line “it is what it is.” The groups of screenwriters, cinematographers and actors submitted 80 films to the Project on Sunday, May 4th. Sixty eight of those films were completed and submitted within time constraints, and all of these will be screened for the public at Kendall Square Cinema in Cambridge this week.

Filmmakers from every team interviewed call the screenings, “fun, crazy, and full of booze,” and Guaraldi told us, “the screenings are incredible. Everybody’s been working and waiting, but no one has seen all of the films yet. “Imagine Star Wars: Episode One,” but the films are actually good. Plus, you’ll run into the actors in the lobby.” For a full screening schedule, check out the 48HFP website or follow them on Facebook.

So who are the people who dedicate themselves to such a strenuous, passionate task? Catching up with a few of the teams before the 48-hour period began demonstrated an interesting mix of personalities. 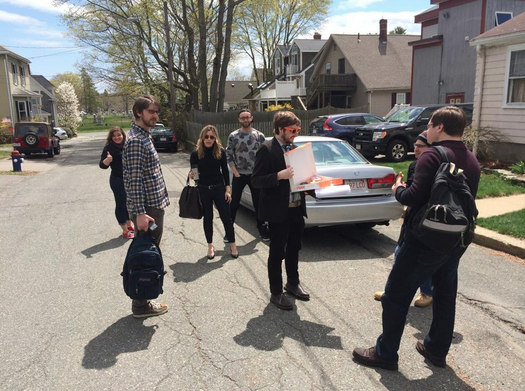 Brainfox / In the Car, the Boston-wide champions of 2013, have a lot to live up to this year. In fact, their Project honors include Boston Best Film 2013, Best Cast, Best Directing, Best Editing, and Best Use of Prop. Their winning film, “All for Knot,” is available here.

Guaraldi considers them a formidable team. “They’re great folks,” he says. “They hadn’t won as a team after participating for several years, I believe, so their awards sweep was lovely to see in 2013. Their first film was disqualified for time, even though it had a wonderful final reveal.” Brainfox actress and collaborator Audrey Johnson, who we spoke about upcoming web series “K&A” with, is excited to continue working with her core team. She answered some team profile questions on behalf of Brainfox:

BDC: How long has Brainfox/In the Car been a part of 48 HFP?

AJ: The master clinic in profanity from Peter Capaldi in “In the Loop.”

AJ: All of the Sam Rockwell clones in “Moon.”

“It’s just such a good time,” Johnson says about 48HFP. “We were lucky enough to take “All for Knot”to Internationals in New Orleans last year, and although we were actually mugged at gunpoint on the street, not joking, it was such an overall amazing experience that it didn’t even matter. We came home and told people about meeting other filmmakers and getting to share our project, and then getting mugged was an afterthought.” Johnson says the Brainfox half of the collaborative team is dedicated to making short, punchy sketch comedy throughout the year, but the 48HFP allows everyone to “come together for a full weekend and be creative all at once.”

Other teams cite similar sources of joy in the project. “I do 48 Hour Film Project because of the team I get to work with,” says Shannon Connolly of Team Eponymous. “It’s the people who don’t go home early and get to sleep over the weekend that end up going out and partying afterward,” says one of her collaborative partners, James Lindsay. Team Eponymous, based out of Somerville’s Starlab Studios, says it’s primarily interested in the dark comedy genre. Richard TK Hawke, another Eponymous collaborator, says the writers of dark comedies are most often “sad comedians, actors and/or degenerates with crushed dreams,” and Eponymous seems comfortably amused to identify itself this way. Lindsay, who directs Eponymous’ 2014 film, says “comedy doesn’t necessarily inform content the way other genres do.”

BDC: How long has your team been a part of 48 HFP?

HAWKE: This is our third year taking part in the 48HFP, but it’s our second year as team Eponymous.

BDC: What’s the best line in a movie?

CONNOLLY: Well, probably the last line that you can’t hear in “Lost in Translation.”

HAWKE: Clark Griswold’s “I think you’re all f***ed in the head.”

LINDSAY: Either “The Thin Red Line”or “A Thin Line Between Love and Hate.”

HAWKE: Suzanne Dorn, Roger Dorns’ cheating wife in “Major League.” She sleeps with Charlie Sheen to get back at her husband.

LINDSAY: The moment when you first hear a character’s name. Not the name itself, but the way you hear it the first time.


Hawke and Lindsay host a monthly, semi-sarcastic Quiz Night at the Middle East in Cambridge, and if the quality of their promo videos for Champion of Champions is evidence enough, Eponymous is a worthy contender for awards in 2014. Many of their screenwriters, producers and actors are also regular performers at ImprovBoston. Key members of Team Eponymous collaborated in a charming 2012 effort, “Blaze of Our Lives,” (submitted in the Film De Femme category), and that film is available here. 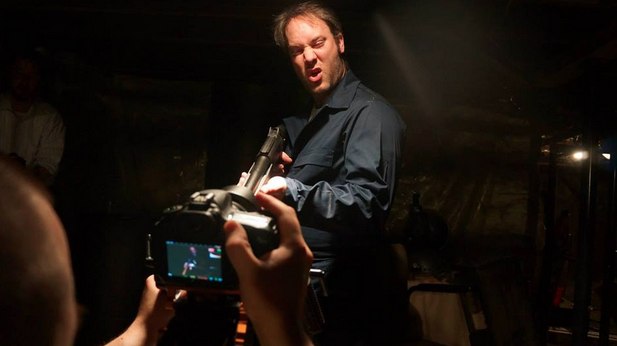 Another team in the running for awards is CFN Productions, a team most interested in films of a darker ire. We spoke with Roach McCrackin from the team.


BDC: How long has CFN Productions been involved with 48HFP?

BDC: Which movie character would you date?

BDC: What Oscar category should exist? 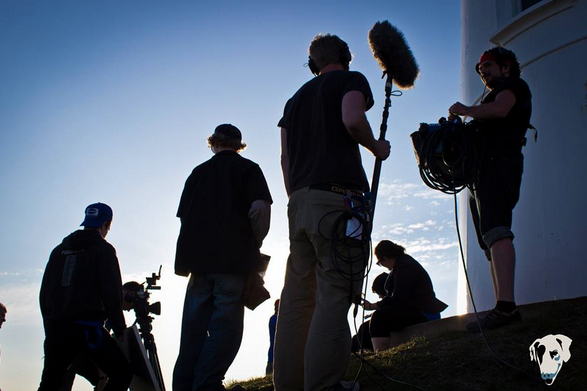 Last on our featured list was Good Natured Dog, a friendly, upbeat group based on the Cape. We caught up with Alecia Lebeda from the group.

LEBEDA: I think we like everything! As a group we like comedy, but you can bring funny moments into almost any genre.

LEBEDA: Sam in “Moonrise Kingdom”: “What kind of Bird are you..?” and Crash’s “I believe…” speech in “Bull Durham”: “…I believe there ought to be a constitutional amendment outlawing Astroturf and the designated hitter. I believe in the sweet spot, soft-core pornography, opening your presents Christmas morning rather than Christmas Eve and I believe in long, slow, deep, soft, wet kisses that last three days.”

LEBEDA: Huh, I don’t think I’ve felt that way about any character.. except for Mighty Mouse.

LEBEDA: I wanted more out of “Monument Men.”