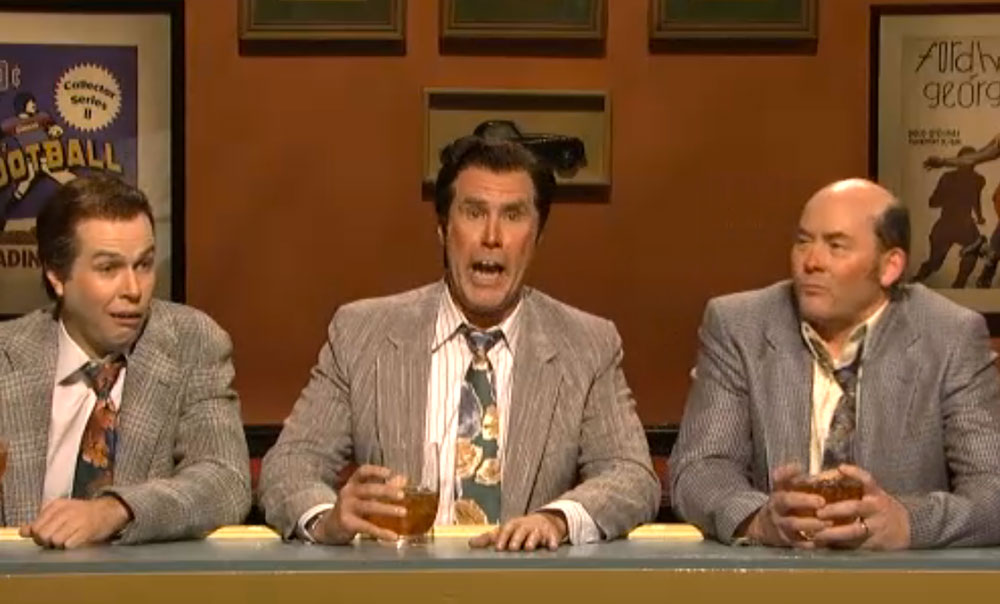 Teenage girls freaked when One Direction showed up during the monologue on last week’s “Saturday Night Live” to sing a rendition of “Afternoon Delight” with host Paul Rudd and his “Anchorman 2: The Legend Continues” co-stars Will Ferrell, Steve Carell, and David Koechner. But I freaked at the end of the episode, when “SNL” vets Ferrell and Koechner reprised one of the great underrated skits in the show’s history: “The Brasky buddies.” As bucktoothed, drunks telling increasingly tall tales of Bill Brasky (“He’s a 10-foot tall beast man who showers in vodka and feeds his baby shrimp scampi,” as they once put it), the pair was joined by Rudd and current castmembers Taran Killam and Kenan Thompson in the Brasky adulation. Before we all watch tonight’s episode with host John Goodman (who has made a fine Brasky buddy himself before, by the way) and forget this skit again, here are my favorite Brasky quotes of all-time, in no particular order.

Before we start, here’s a new classic from last week’s show: “Brasky’s colonoscopy tape got higher ratings than ‘How I Met Your Mother.'” Also, if you want to get really deep into Brasky nostalgia, this is your ticket. To Bill Brasky!

“He taught me how to love a woman — and how to scold a child.”
“Did I ever tell you about the time I went horseback riding with Brasky, but there weren’t any horses around? Well, Brasky throws a saddle on my back and rides me around Wyoming for three days. Well, wouldn’t you know it, my stamina increases with each day and I develop tremendous leg muscles. So anyway, Brasky decides to enter me in the Breeders’ Cup, right, under the name Turkish Delight. And I’m running in second place, and I’m running and I break my ankle! They’re about to shoot me. Then someone from the crowd yells out, God bless him, ‘Don’t shoot him, he’s a human.'”
“He hated Mexicans! And he was half-Mexican! And he hated irony!”
“Did I ever tell you about the time Brasky took me out to go get a drink with him? We go off looking for a bar and we can’t find one. Finally, Brasky takes me into a vacant lot and says, ‘Here we are.’ Well, we sat there for a year and a half. Sure enough, someone constructed a bar around us. Well, the day they opened it, we ordered a shot, drank it, and then burnt the place to the ground. Brasky yelled over the roar of the flames, ‘Always leave things the way you found them!'”
“He wears a live rattlesnake as a condom.”
“I went camping with Brasky … I’m in the back of a pickup with Bill Brasky and a live deer. Well, Brasky, he grabs the deer by the antlers, looks at it and says, ‘I’m Bill Brasky! Say it!’ Then he squeezes the deer in such a way that a sound comes out of its mouth — “Billbrasky!” It wasn’t exactly it, but it was pretty good for a deer.”
“I once saw him scissor-kick Angela Lansbury.”
“Did I ever tell you about the time Bill Brasky showed up at my daughter’s wedding? You know my daughter, she’s a beautiful girl. Well, Brasky shows up and you know he’s a big fella. Well, he’s standing right between me and my daughter at the ceremony. He’s got no right to be there, but he’s drunk and he’s Brasky. Well, long story short, the priest accidentally marries me and Brasky. We spend the weekend in the Poconos — he loved me like I’ve never been loved before.”
“He once punched a hole in a cow just so he could see who was coming up the road.”
“Did I ever tell you about the time Brasky was in a production of ‘The King and I’? On opening night, Brasky chloroformed the entire cast and slowly eats them in front of the audience for two hours. The production got pretty good reviews.”
“Brasky got his wife pregnant and she gave birth to a delicious 16-ounce steak. The afterbirth was sauteed mushrooms.”
“I remember one time Brasky took his family to Sea World. They were watching Shamu the whale when Brasky got splashed. So Brasky yells, ‘I’m Bill Brasky and no one gets me wet!’ So he climbs into the tank, grabs Shamu, and throws the whale into the audience, splashes him and yells, ‘How do you like it?’ And then damn if Brasky didn’t step in there and finish the show.”
“Brasky used to ride upon a steed, perchance to spy a lady.”