10 things not to miss at PAX East this weekend

Today through Sunday, hordes of video game fans will swarm the Boston Convention & Exhibition Center for PAX East. Billed as the “largest gaming event in North America,” the Boston show has doubled in size since the first show in 2010 at the Hynes Convention Center. Companies from XBox to Playstation bring their latest and greatest to show off to an estimated 70,000 attendees over the weekend. There’s so much to see and do, it can be overwhelming to battle the crowds. Here are our recommendations of what to see and do at PAX East.

More often than not, booths on the convention’s show floor will be eager to give out free stuff to gamers. If you see a large crowd forming around a booth, it’s raffle time. Companies often have ticketed giveaways throughout the weekend. The trick is knowing when these raffles happen. Keep a look out on Twitter using the #PAXEast hashtag for announcements to score yourself some sweet swag.

Most companies will have demos of their newest games available at booths for attendees to play. Be careful though, titles such as the new Borderland’s 2 prequel that was just announced or the next Infinite Crisis game are sure to have long lines of convention goers eager to get their first taste of gameplay.
The people-watching at PAX East is by far the best you’ll see. Fans spend months putting together costumes of their favorite characters to show off at the event. Be sure to look out for several Super Marios and Master Chief from Halo, they are staples every year. 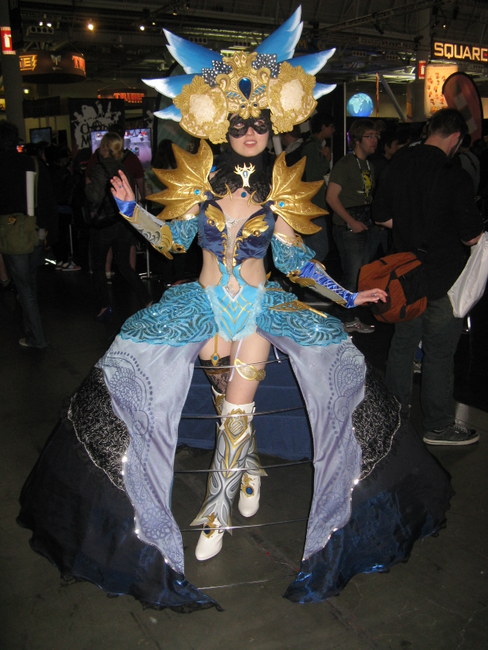 Blah blah video games are cool, sure, but board games are in the middle of a huge resurgence. Tabletop games such as oldtimer Magic: The Gathering and the hugely popular Cards Against Humanity have a large presence at the show, including introducing special show-only cards available during the weekend. Check out the tabletop area as well, and play a new board game with friends.

Everyone from YouTube stars to game developers sit on panels to chat about a wide range of interests to gamers. Check out the super popular Rooster Teeth podcast live show on Friday, or Saturday’s panel on women in the gaming industry for starters. Be sure to line up early, rooms often fill up fast.
If you’re looking to challenge, this is the place. There’s a tournament for everyone at PAX East. Halo? Check. Settlers of Catan? Please, of course. NBA Jam? Actually… yes. For those of you still rocking the N64 controllers, there’s even a GoldenEye tournament on Saturday.
Arcade faithful, don’t you worry. There’s an entire room full of old school games. Playstation, N64, Atari, Commadore 64, they are all here and free to play. On the show floor, there’s a whole section of Pac-Man and Galaga machines to make you feel old as dirt. It’s okay, just remember retro is cool again, everyone.

Every night PAX East closes out with band performances in the main theatre. On Friday night, treat yourself to the 8-bit sounds of Anamanaguchi, who make music on a hacked NES. Saturday evening the Video Game Orchestra performs selections from The Legend of Zelda, Final Fantasy and more for attendees.
Thought you were the only Mario Kart fanatic around? You are not alone. There’s tons of meetups for players of specific games such as Mass Effect and League of Legends, some of them sponsored by the companies making these games. Make your way there and talk game tactics with your fellow fans.
Ain’t no party like a gamer party, PAX East show goers know how to throw a party. A Pokemon bar crawl kicks off the Friday night festivities, while on Saturday night, the Infinite Crisis launch party hits up Guilt Night Club. There’s a wide range of beer garden meetups and karaoke sing-offs for everyone. Check out @PAXparties on Twitter for even more events.