Boston ranked #1 city most likely to survive a zombie apocalypse

We definitely live in the right place.

According to Careerbuilder LLC, Boston is more likely to survive a zombie apocalypse than any other city in the United States.

Based off of actual, real, legitimate data from the Economic Modeling Specialists Intl., it was determined that Boston is the city most equipped to fend off the undead in the event that the new millenium’s favorite horror movie premise became a reality. No wonder we’re so into zombies.

According to the story’s official press release, the study analyzed pertinent characteristics of the 53 most densely populated metropolitan areas and came up with a weighted index based on each city’s “occupational skills and industry characteristics.”

Boston pulled way ahead of the crowd in terms of ability to concoct an antidote. “With its 24,000 biological and medical scientists and professionals, Boston is most likely to develop a cure for the common zombie infection,” the press release reads. God bless all the med schools in the area.

What’s the city least likely to survive the apocalypse, you may ask? New York City, with an astronomically low containment score of -11.17. Oh, no! Yankees fans would be the first to go. Bummer.

Here are the other top contenders: 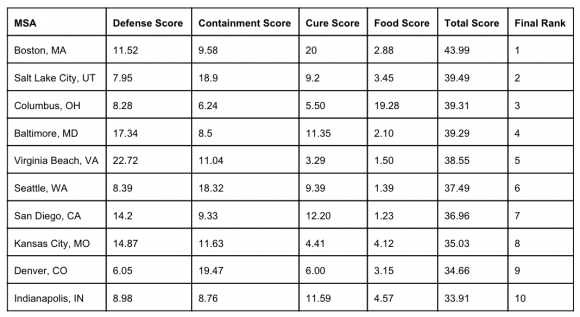 To get more details about the logistics behind these calculations and see just how this beautiful nation would fare at the end of the world, read the formal press release.