You know Andy Daly from ‘Eastbound & Down.’ Now get ready for Comedy Central’s ‘Review’ 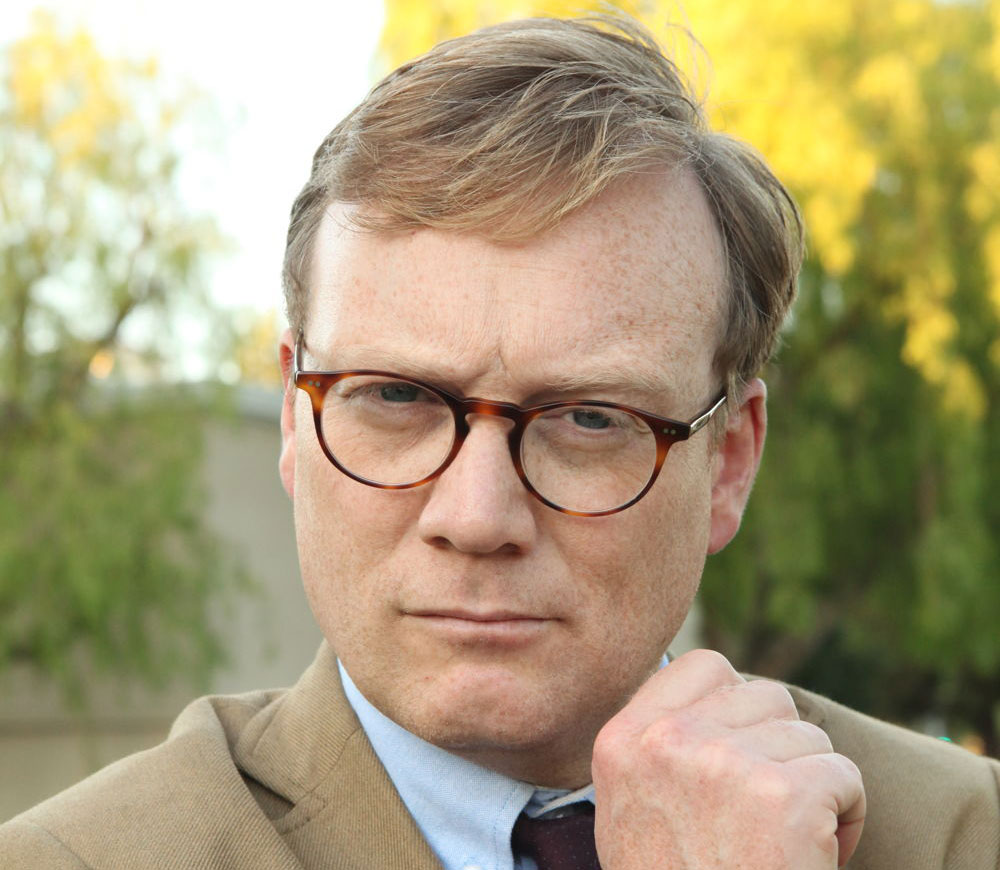 Andy Daly is a “that guy.” Comedy fans who don’t know his name will recognize him when they see him, “that guy,” who does all those characters on “Comedy Bang! Bang!” or played Principal Custer in “Eastbound & Down,” or stole scenes as the play-by-play man in the Will Ferrell movie “Semi Pro.” He’s got what he calls a “Howdy Doody, Richie Cunningham” look – unassuming, like anyone you might find yourself in line with at the bank. Which also makes him the perfect choice to play Forrest MacNeil, the well-heeled but relentless “life reviewer” and host of Comedy Central’s new show “Review.” MacNeil reviews dangerous things like cocaine addiction, making a sex tape, being a racist, and eating 15 pancakes in one sitting. We caught up with the former “MADtv” star by phone as he was strolling through New York City to talk about “Review” and his upcoming show “The Gas Presents Andy Daly with Andy Blitz” at Great Scott Friday.

Q. Where did the idea for “Review” come from? Is this something you’ve been working out onstage?

A. No, actually, “Review” began as an Australian series. These two Australian guys, Phil Lloyd and Trent O’Donnell, did it for two seasons on Australian television. A small cult hit over there. I guess Comedy Central saw their version and thought of me to star in it. I worked at Comedy Central a bunch. They sent the DVDs over to me and I said, “Yeah, that’s exactly right. Good call.”

Q. What was it that attracted you to it?

A. Well, I love to play characters who are together on the surface and seem like perfectly well-put-together suburban regular guys who then get pushed into extremes, either because of their own insanity or because of a situation that gets forced on them. Like in “Eastbound & Down,” that guy is on top of the world when we first meet him. He makes the mistake that he doesn’t know is a mistake of hiring Kenny Powers to be his gym teacher and then his life unravels as a result. This show seemed like an opportunity to do that but in an even more extreme form because this character, by design, is taking on extreme life experiences that he is ill-equipped to handle. The opportunity to take a regular, square guy into increasingly insane circumstances and watching him grapple with them seemed like so much fun for me to write and to play, especially.

Q. Is there something about that non-threatening middle class kind of character that you identify with? Is it something you feel is ripe for comedy?

A. I definitely identify having grown up in a very sort of idyllic, suburban town in New Jersey. I know that I have this sort of Howdy Doody, Richie Cunningham appearance and a big, silly smile, so to start from that place and take it someplace unexpected – to me, comedy is all about surprising people. The more you can surprise people, the more you shake them up and make them laugh.

Q. Have you ever done any of the things you review on the show?

A. Oh, that’s a good question. Hmmm. I mean, in little ways. I’ve certainly felt small amounts of road rage driving around Los Angeles but I’ve never gotten into a full-on car smash off. But I know what it feels like. What else? I’ve certainly never eaten 15 pancakes. I’ve never made a sex tape. Most of these things I have not done. In truth, I would be as ill-equipped to do this job as Forrest MacNeil is.

Q. The characters you play on “Comedy Bang! Bang!,” are those created separately and then brought to the show, or are they tailored to the specific episodes? Are there a bunch of them hanging around in your head waiting to get out?

A. The way it works, a lot of those characters I’ve created and played onstage for years, and then sort of brought them into the podcast more or less fully formed, but prepared to take them in new and different directions based on the improv that happens in that room. And then those characters I’ve then taken onto the TV show in sort of a more polished format. But that’s how it was with the first bunch of times on the podcast. But at this point, now I’ve sort of run out of old characters and it’s about creating new characters specifically to bring on that show.

Q. How are you finding time to also launch the “Andy Daly Podcast Pilot Project?”

A. Yeah, it was starting to get tricky. But what happened was, we shot and edited “Review” pretty much completely, except for all these minor after effects that had to be straightened out. We had done all of the intense creative work of post-production and had several months until the show was going to premiere and any sort of press was going to get started for it. So I was just puttering around the house not knowing what to do and my wife said, “You should take on a new project of some kind, like a one-man show or a podcast.” And I just said, “That sounds… hard.” Then Matt Gourley of Superego Podcasts e-mailed and said he had just signed on with Earwolf as a podcast producer and they told him go find new comedy podcasts.

Q. Will you be doing more sketch or stand-up when you come to Boston? What will the show be like?

A. I’m going to do some characters that people know from the “Andy Daly Podcast Pilot Project,” and then we’re going to show some clips from “Review.” Actually, Forrest MacNeil is going to queue up some clips from the second episode of “Review.” So these are exclusive clips that will not have aired anywhere before we show them at Great Scott. We did this show at the Bell House in Brooklyn and it was so much fun.

END_OF_DOCUMENT_TOKEN_TO_BE_REPLACED

Enter to win a pair of tickets to attend The Hess Collection Seminar and Dinner as part of Boston Wine Festival 2018 at the Boston Harbor Hotel on Wednesday, March 14th. END_OF_DOCUMENT_TOKEN_TO_BE_REPLACED

I referred to it as the “best kept secret” in Boston arts for the holidays. END_OF_DOCUMENT_TOKEN_TO_BE_REPLACED

Boston’s arts scene shines at this time of year. END_OF_DOCUMENT_TOKEN_TO_BE_REPLACED

It’s so much more than a holiday show. END_OF_DOCUMENT_TOKEN_TO_BE_REPLACED

Rock for a cause this holiday season. END_OF_DOCUMENT_TOKEN_TO_BE_REPLACED

Get out and see a show this holiday season, and save some money when you do. END_OF_DOCUMENT_TOKEN_TO_BE_REPLACED

You can help give the gift of music to kids in need this holiday season. END_OF_DOCUMENT_TOKEN_TO_BE_REPLACED

Be honest: when’s the last time you attended a Gala? END_OF_DOCUMENT_TOKEN_TO_BE_REPLACED