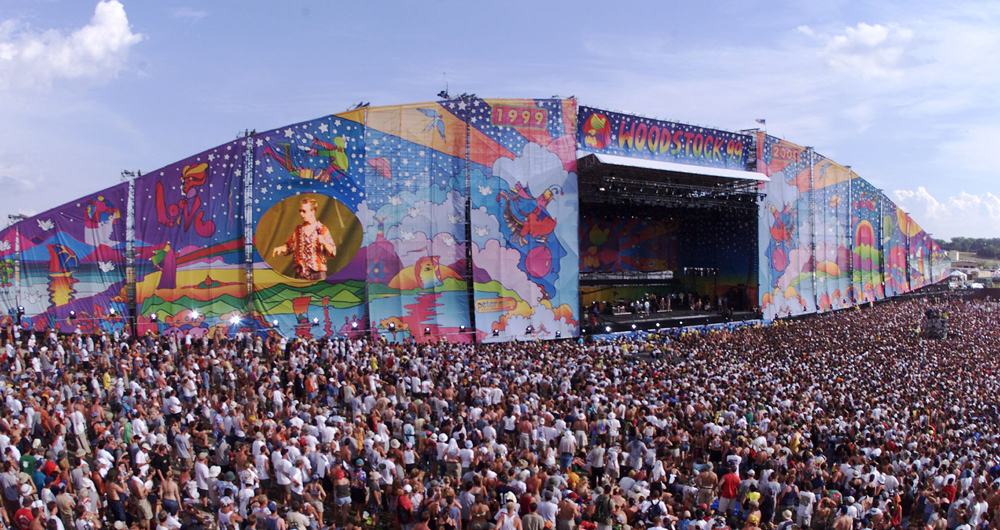 It doesn’t take your dad’s old hippie friend to tell you that music festival culture isn’t what it used to be. The large gatherings originated with the vision of microcosmal peace and understanding -sharing a toke here and some love there. The past decade has given way to a new culture fueled by brand names, party drugs, Whole Foods tents, and the same headliners over and over again. It’s a sign of the times, nobody’s fault really. Conveniently placed in the middle of the original Woodstock and today’s Coachella, however, is what I consider to be the most fascinating music event of our time: Woodstock ’99.

Woodstock ’99 is widely seen in retrospect as an irritated pimple on the ass of American music culture. On the most basic level, Korn and Limp Bizkit were the Jimi Hendrix and Crosby, Stills and Nash of the third iteration of upstate New York’s grand assembly of peace and love. That alone doesn’t retain the luster that the seminal Woodstock lineup did, but what hit the papers in the weeks following wasn’t the music, it was the destruction.

On the final day of Woodstock ’99, anti-gun violence organization Pax passed out candles to the crowd to be lit in a moment of peace and unity during Red Hot Chili Peppers’ rendition of “Under the Bridge.” What resulted was a mass torching of a sound tower, festival equipment, cars, and RVs during the Peppers’ following cover of Jimi Hendrix’s “Fire.” It was all the media could focus on, and understandably so.

The festival was just three short months after the Columbine massacre, which not only raised a new level of concern surrounding the youth of our nation and public violence but also put a target on the backs of many of the bands who were playing the festival. Intelligent observers would know at this point in time that the music wasn’t to blame for the chaos, even if Fred Durst did more to encourage people to “not mellow out” during the band’s rather violent set than the opposite.

Fifteen years later, it’s hard to determine what really led to such rebellious and aggressive behavior. Was it promoters and corporations having their hands all over the $5 bottles of water being sold? Was it the oppressive heat that plagued crispy, hungover showgoers all weekend at the grim setting of Griffiss Air Force Base? Was it a general culmination of a decade’s worth of souring Gen-X frustration met with post-Napster greed and entitlement? Well, I may be getting ahead of myself there, but everyone remains curious why Woodstock ’99 ended in flames. What the news focused less on, unfortunately, were the profuse sexual assaults and twisted sense of carnal freedom that dominated throughout the weekend.

In a Rolling Stone piece from over a month after the festival, Rob Sheffield finally made note in a firsthand account, acknowledging the rife nudity, and exactly how it was translated by more ruthless male attendees.

Goon accomplices on the ground find these [shirtless] girls and surround them. Other goons walking by join the huddle with their cameras. The goons on the trailer chant, “Pick her up! Pick her up!” Two short girls with backpacks are surrounded by a mob of about sixty guys. As the “Pick them up” chant gets louder, the girls undo their bra tops, the cameras flash and the trailer guys spot another target.

There’s another perspective though, one that’s even quieter than the other two: the memory of Woodstock ’99 actually being a really great time. There were drugs. There was sunshine. There were rainbows. The necktied reporters on scene were quick to point out the garabage, the waste, and palpable feeling of disrespect. Ask most showgoers, however, and they’d likely tell you that those were all reasons why Woodstock ’99 was one of the most unforgettable experiences of its era.

For every shithead, there were a handful of peaceful campers, even if they were there to see Insane Clown Posse. It was a different kind of fun though, not the type to live up to the pressure created by its name. It was thirty years later. It was the ’90s. It was proof that all that glitters is not Woodstock, and it is what has continued to morph into the festival scene of today.

One of the performers at Woodstock ’99 was Lajon Witherspoon, who played a set with his alt-metal band Sevendust. Sevendust’s set was similar to many of the other popular ones at the festival. It was rowdy, ferocious, and jubilantly reckless. It was on the third and final day of the event, but the collective drain was outshined by Witherspoon’s excited joy, strangely making for a highlight of the multi-day affair. The rainbow, man, the rainbow (1:50 in the video below, if you’re wondering what I’m talking about).

I caught up with Witherspoon to get his perspective on America’s most notorious festival, 15 years later.

Most of the bands that sprouted out of the late ’90s are looked upon pretty unfavorably these days. Sevendust, I feel, has toured and recorded steadily since then though, and continue to be a pretty productive machine. What do you accredit that to?

Lajon Witherspoon: Yeah man, I think it’s because I pray to God and keep my faith. I constantly think about my family, my brothers, my band. I think about my family at home too, and the fact that I feel destined that this is what we’re here to do. Just what an honor it has been to be in this industry for so long and people still care what the hell is going on with us. What more could you ask for? I just feel very blessed.

Are there major differences between your crowd from 15 years ago and your crowd today?

I think the family base is always growing.It’s crazy to look out in the crowd now and see that kid who’s been there since 1997 but he’s a grown man now and he’s got a wife, he’s got kids, and now you come back to town and the kids are having kids! I’m 41 years old, I’m young to the band, but we’re getting older, and it’s definitely a family affair. It’s been crazy, we went out on tour with that band Asking Alexandria, and they have a lot of young, crazy cool kids coming out and that tunes us up a little bit, because a lot of those kids would have never come to a Sevendust show on their own. We rocked it, it was great.

So it’s been almost exactly 15 years since you guys played Woodstock ’99. What do you remember from that festival?

I remember that young lady, what’s her name? Jewels?

She was performing over the hill at the same time as us, and I went on the stage and said something, and I think 50,000 kids ran over that hill. I do remember the rainbow at Woodstock ’99.

Oh yeah, you pointed out that rainbow from on stage.

I remember going on Willie Nelson’s bus too, that was pretty crazy. I just remember getting to Woodstock and walking the grounds and thinking, “wow, I can’t believe we’re going to do this.” We played on the last day, so we were seeing all the carnage and all the partying that everyone had been doing. It was all just really cool to see and to be a part of.

From most of the non-media people who were there, you often hear stories that the festival was actually a pretty awesome time. Was Woodstock ’99 really the disaster that the papers made it out to be?

From what we saw, I think it was a really positive gathering. When you have a big event like that, you always have a few knuckleheads, but that didn’t effect our show, the beautiful day, our experience, the history of it, or anything of the sort. I would hope that they could do something like it again.

Any memories of your set in particular?

The eye connection, the whirlpools of people running around, the bottles being thrown up in the air. The whole experience was just overwhelming. To be a part of something so big was just phenomenal for me, especially as a young performer.

And the rainbow too. There’s definitely something symbolic there right?

I definitely feel like it, I believe in all that crazy stuff man. It must have something to do with a higher power shining down on us, which is definitely a cool thing.

Enter to win tickets to see Trio Da Kali at The Villa Victoria Center of the Arts (Newton, MA) on April 10th. END_OF_DOCUMENT_TOKEN_TO_BE_REPLACED

END_OF_DOCUMENT_TOKEN_TO_BE_REPLACED

Enter to win tickets to Rhye at The Paradise on February 28th. END_OF_DOCUMENT_TOKEN_TO_BE_REPLACED

Her new album has been pushed back, but we have Kimbra’s new single for you. END_OF_DOCUMENT_TOKEN_TO_BE_REPLACED

The folk duo returns with a new record this week. END_OF_DOCUMENT_TOKEN_TO_BE_REPLACED

Now that we’re done looking back at 2017, let’s look ahead at 2018. END_OF_DOCUMENT_TOKEN_TO_BE_REPLACED

Our first Song of the Week for 2018. END_OF_DOCUMENT_TOKEN_TO_BE_REPLACED

In a year when so many things were off, the music was right on. END_OF_DOCUMENT_TOKEN_TO_BE_REPLACED