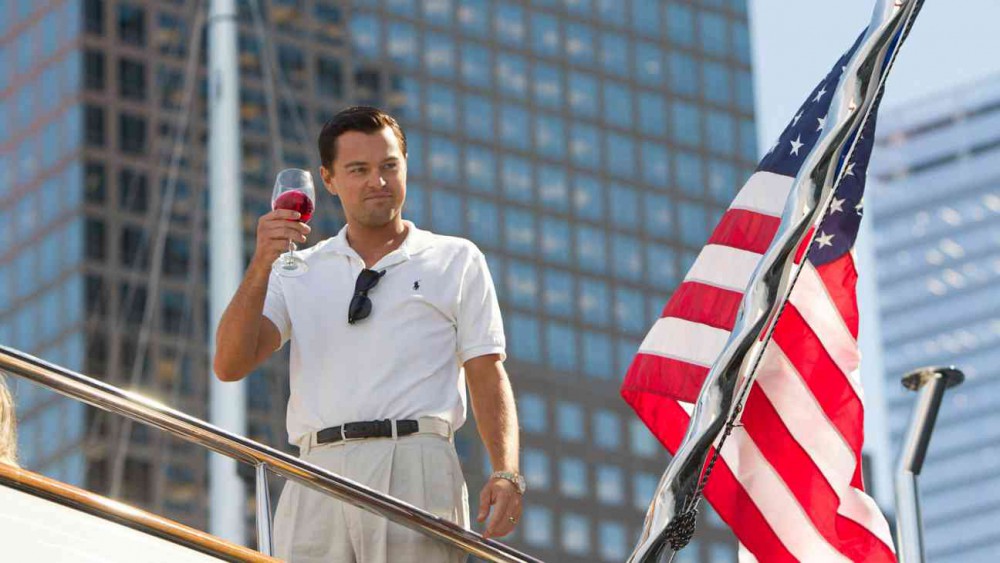 My dude,
Sorry to have left you hanging at Jose McIntyre’s last weekend. I understand shit got nutty. My apologies.

I write you this fine January day to speak on the Oscars (announced yesterday), and especially one motion picture that scored five nominations despite being one of the most righteously badass cinematic experiences I’ve had in my short life.

It’s called “The Wolf of Wall Street” and – wow. The swag oozing off the screen was nothing short of breathtaking. It’s no wonder the tastemakers at the Academy nominated it for. Best. Picture. Of. The. Year, playa!

This is a motion picture that is exploring new terrain, broseph, I kid you not. That biddy Kelli told me Gawker reported it says “Fuck” over 500 times throughout the course of the film. I know what you’re thinking: Finally – in 2014 – a movie that’s willing to break down the language barrier once and for all. We live in a trailblazing time. But, of course, word police is all over it, saying it’s proof of a decline in civil discourse, but FUCK that. More than 500 fucks, kid. That’s more fucks than you probably ever heard on a 2 Chainz album, you know? YOLO!

“Wolf” stars Brother Leo and – seriously – if you thought he was apeshit in “Blood Diamond,” I can’t wait for you to behold the fury he unleashes here. I wept when I realized this was the same strapping fellow we grew up watching in classics like “Gilbert Grape” and “Growing Pains.” Stunning work.

But what does “Wolf” offer young, well-groomed men about town like ourselves, you might ask? Why am I bothering to concoct this letter to you when I could just as easily display my visual enthusiasm via Snapchat? Bro, not only does “Wolf” feature non-stop doll hairs and ye, but – truly, madly, deeply – it is the closest thing I have witnessed to resemble the ungodly high of … being us.

I have read online of late a lot of jabberwocky and backlash against the film. They call it “soulless,” and fault Brother Leo for daring to swag to the max. Kid, if people want morals, I tell them, go watch “The Blind Side” (also a clutch motion picture). If people want to glimpse the ridiculous thrill of our baller existence, I say, we need to embrace “Wolf” wholeheartedly. Nay, we need to salute it.

Now, to be clear, you and I don’t work on Wall Street, per se, we’re rockin’ that Post Office Square life. But, WHO CARES? The world needs to understand that our pursuit of the ultimate chay is not an end unto itself. No, there is greater purpose to the jagerbombs we drink, the weights we lift, or the pomade we sculpt in our hair. We strive because of this dream we’ve been fed since the day we were born. It’s our yearning for life’s sweet pleasures that separates us from the saps.

Let’s examine the facts. Brother Leo starts out like us, hungry. And while we settle for nachos at Warehouse to pass the time, he’s off grabbing lunch with a totally bugged out Matthew McConaughey. Soon enough, he’s pulling in more a month than Dr. Dre does in a year (shout out to Dre beats). Sure, “Wolf” isn’t hardcore about showing us the victims of Brother Leo and stuff, but this isn’t their story, anyhow. To the victor goes the spoils, I say.

Actually, I want to pause for one moment here and congratulate Brother Jonah Hill on securing an Oscar nomination for his role in “Wolf.” It is an honor well-deserved. In fact, he may be the first Oscar nominee to use a prosthetic penis onscreen, if my factcheckers are accurate. Kelli says Wahlberg sported one in “Boogie Nights” but that he wasn’t nominated. Brother Jonah, trend-setter!

Anyway, to top it all off, Brother Leo bags a choice slampiece: enter Margot Robbie. Mah gawd. Her flow is timeless. Kid, why can’t we meet girls like this on Tinder?

After our many excursions to Ned’s every weekend, I know you would be envious of the way Brother Leo devours the neckbreakers here. He marries Margot, yet remains addicted to the night life. Just like us! Kelli says it’s sexist and degrading or whatever the way these bros treat biddies like disposable items, but I’m like, whatever! She’s wackadoo. She has no clue what goes on when you’re a handsome urban professional in the prime of your abilities. HYFR!

The best part is: Brother Leo and Brother Jonah and Brother Matthew, they make no apologies whatsoever. There’s seriously no second act in the lives of these Americans. They understand if you make good, and got that paper to back it up, that’s enough to carry you a long way. I respect their hustle.

I’m serious, bro. This is the realest, most honest, rawest piece of entertainment I’ve seen since “American Psycho.” Pale Nimbus. Remember when Bateman said that his confession meant nothing? Well, that’s what this is. Instantly quotable, “Wolf” defies its critics with a vengeance. And, really, while it’s not inspirational, it’s totally aspirational, kid. Classic.

I keep thinking back to the time Skylar got that tattoo on a dare sophomore year. The one quote that read, “Winning isn’t everything, it’s the only thing.” At the time, I thought that was a mad silly thing to put on your backside. But now, after devouring “Wolf,” I’m starting to get it. Sometimes, kid, that’s all there is.

If the Oscars weren’t enough, consider this a formal endorsement of “Wolf” and the glorious lifestyle it depicts and totally encourages. Haters gon hate, but we are infinite, you know? Carpe diem, Brother Leo! Get it!

Will I be seeing you at Royale tonight? Eat. Sleep. Rave. Repeat. LOL.

Golden Globe and Emmy nominee Benjamin Wallfisch is the composer responsible for the score of the hit movie IT. I talked to Ben about his approach to scoring the new version of this iconic story and his thoughts on film and music overall. Some very insightful commentary; listen in. END_OF_DOCUMENT_TOKEN_TO_BE_REPLACED

Rupert Gregson-Williams is an award-winning film composer. He just so happened to compose the score for this summer’s big blockbuster Wonder Woman. We talked about his beginnings in film scoring, film scores that move and inspire him and, of course, Wonder Woman. END_OF_DOCUMENT_TOKEN_TO_BE_REPLACED

Jeff Rapsis is a New England-based composer and performer. Lately, he’s been creating live musical scores for silent film screenings. I talked to him about his process and a few of his upcoming performances at The Capitol Theatre in Arlington and the Somerville Theatre. You can keep track of where else Jeff is scoring silent films here. END_OF_DOCUMENT_TOKEN_TO_BE_REPLACED

Comedian Myq Kaplan is a comedian named Myq Kaplan. He joined me in studio this afternoon, and he’s at Laugh Boston this weekend. Click here for tickets. END_OF_DOCUMENT_TOKEN_TO_BE_REPLACED

Planning on seeing Rogue One: A Star Wars Story when it opens this weekend? I joined Adam 12 to give you an idea of what to expect. But don’t worry, I didn’t give anything away. END_OF_DOCUMENT_TOKEN_TO_BE_REPLACED

My goodness, I love Sue Costello. It was great having her back in studio today to talk about her one-woman show, #IAmSueCostello, playing tonight at the Revere Hotel. Click here for tickets. END_OF_DOCUMENT_TOKEN_TO_BE_REPLACED

Trump Takes On…Boston! is running now through election night at Laugh Boston. David Carl was back in studio this afternoon to talk about bringing Donald Trump to the stage, the cathartic element (for both him and the audience) and how audiences have been reacting so far. END_OF_DOCUMENT_TOKEN_TO_BE_REPLACED

Trump Takes On…Boston! has arrived at Laugh Boston. I had comedian David Carl, who is portraying Trump, in studio this morning to talk about the show. END_OF_DOCUMENT_TOKEN_TO_BE_REPLACED