With @ExMediaMan, new media gets its very own Gossip Girl 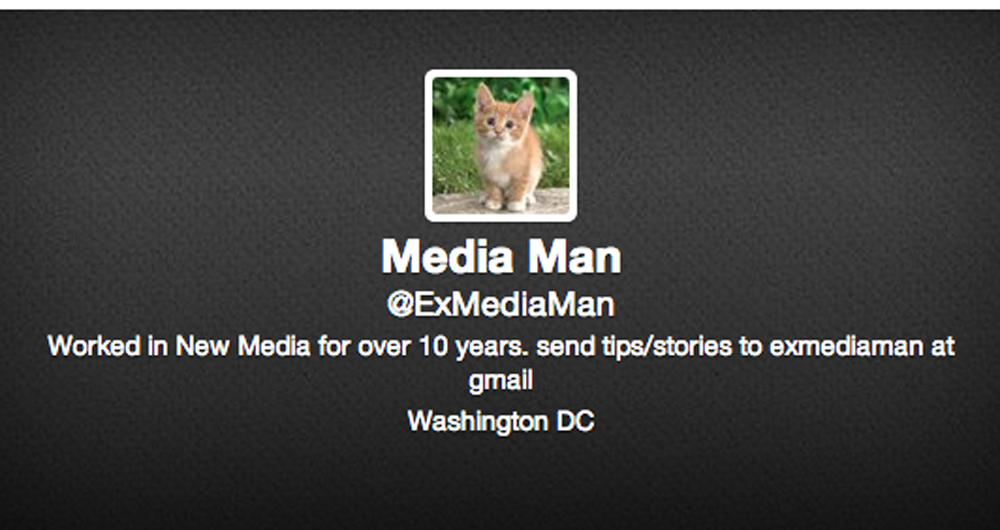 The “it” boys and girls of New Media have driven one ex-employee to spill all of their darkest secrets. User @ExMediaMan popped up March 14, with the promise to “dish” on the many places he has worked, including Buzzfeed, Gawker, The Daily Mail, Huffington Post, and The Atlantic.

I’ll be dishing on many places I’ve worked, including: @BuzzFeed @TheAtlantic @HuffingtonPost @MailOnline @Gawker But friends tell me things

The alleged gentleman so far hasn’t spilled anything incredibly shocking, but if his claim of a book deal is true, then he’s likely sitting on a few more specific, scandalous stories. Or he’s a total hoax.

But let’s be honest. Even if it does end up checking out, the tweets just sound drunk and bitter. @ExMediaMan claims that New Media is a game full of primarily white players who all do drugs and sleep with each other, all of which everyone already knew. If the account is a parody, journos everywhere are getting a kick out of it regardless. Various employees from outlets such as Politico, The Washington Post, Al Jazeera America, and the Huffington Post follow our jaded new best friend.

So far, none of the news outlets have formally responded, though some of those @ExMediaMan called out directly have gotten in on it: Rosie Gray of Buzzfeed retweeted her shout out, and Neetzan Zimmerman, formerly of Gawker, retweeted a subtweet (so meta).

So far, my baseless theories are as follows:

1) @ExMediaMan is female, going the extra mile to cover her identity.

2) @ExMediaMan is drunk, as indicated by the fact that he deletes tweets – a potential sign of regret, which pairs best with alcohol.

3) @ExMediaMan is Barack Obama, who is sick of your shit.

4) @ExMediaMan is Ben Smith (editor-in-chief of BuzzFeed), who is also sick of your shit but is doing it for the web traffic.

An email to @ExMediaMan was not returned.

What are your crackpot theories?

When he’s not running BostonTweet (or running the Boston Marathon), Tom O’Keefe is running around promoting Flutter. He was in studio with SumuApp co-founder Daniel Tewfik earlier today to talk about how you can win free rent for a year in Boston. END_OF_DOCUMENT_TOKEN_TO_BE_REPLACED

END_OF_DOCUMENT_TOKEN_TO_BE_REPLACED

Today, that briefly changed, as the hashtag #TheWorstPartofDepressionIs trended worldwide on Twitter, sparking a conversation on an issue many find difficult to discuss. END_OF_DOCUMENT_TOKEN_TO_BE_REPLACED

END_OF_DOCUMENT_TOKEN_TO_BE_REPLACED

All Harry Potter fans wait for the Hogwarts acceptance letter that they will never receive and dream of the house they want to join. You can hope to be part of Gryffindor all you want, but the choice belongs to the Sorting Hat. Now, instead of traveling the long journey to magic school, Muggles everywhere can consult a Twitter bot that will decide for you.
END_OF_DOCUMENT_TOKEN_TO_BE_REPLACED

Mindy Kaling’s older brother and Massachusetts native Vijay Chokalingam is preparing to release his first full-length book Almost Black, a chronicle detailing how he believes he got into medical school by claiming to be African American in the 1990s.  END_OF_DOCUMENT_TOKEN_TO_BE_REPLACED

While Cards Against Humanity is most famous for creating some of the most awkward moments at your most recent family get-together, they’re dipping their toes into social justice and outreach via a recently released new deck entitled the “Cards Against Humanity Science Ambassador Scholarship.” END_OF_DOCUMENT_TOKEN_TO_BE_REPLACED

A private plane pilot either had some serious jet fuel to kill or had a fraternity in tow yesterday in Florida, as some flight enthusiasts noticed an, ahem, unusual pattern on tracking site Flightradar24. END_OF_DOCUMENT_TOKEN_TO_BE_REPLACED