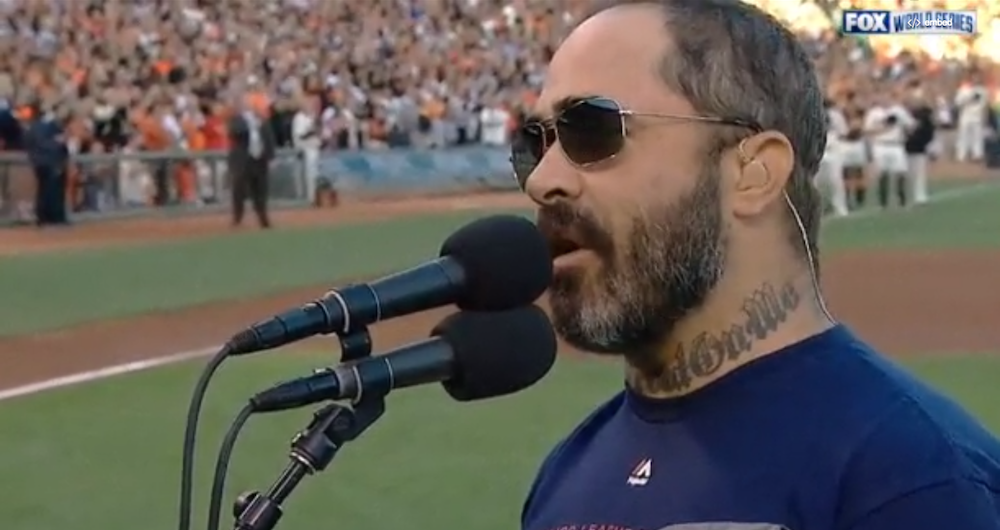 For those who didn’t watch Game 5 of the World Series last night, singer Aaron Lewis, frontman of Springfield, MA band Staind, messed up the lyrics to our national anthem, singing “what so proudly we hailed, were so gallantly streaming” instead of “at the twilight’s last gleaming.” Naturally, journalists had a field day.

World Series Anthem Botched by That Asshole from Staind, blared the headline from Deadspin. MLB Brought in that Creep from Staind to Botch the National Anthem, said Bostinno, adding “I guess Fred Durst couldn’t make it” in the subhead.

Lewis immediately issued an apology after the game, saying he let nerves get the best of him.

“All I can say is I’m sorry and ask for the Nation’s forgiveness. My nerves got the best of me and I am completely torn up about what happened. America is the greatest country in the world. The Star-Spangled Banner means so much to so many, including myself. I hope everyone can understand the intensity of the situation and my true intent of this performance. I hope that the Nation, Major League Baseball and the many fans of our national pastime can forgive me.”

Musical tastes aside, can we all take a deep breath and lay off the ad hominem attacks? Staind may not be everyone’s cup of tea (it’s definitely not mine), but Lewis is far from a creep. In fact, he made the news in June for taking a stand against real creeps, stopping a show to yell at audience members who were allegedly molesting a teenage girl as she crowd-surfed. You know what site wrote an approving post about Lewis’ stance against these sexual predators? Jezebel, the sister site of Deadspin, who had no problem impugning Lewis as an asshole.

I appreciate every ounce of Lewis’s passion and refusal to let this kind of shit stand at one of his concerts. It’s good that he called out this shitty behavior and took a hardline stance on it. Women getting groped while they are just trying to enjoy crowd surfing has been a problem for decades and it matters when members of bands speak up against it.

Jezebel and Deadspin are editorially independent entities, of course, and there’s nothing hypocritical about one woman’s hero being another man’s “asshole,” but it comes off as more than a little petty. Lewis was immediately remorseful for his flub, and has proved (quite recently) that he’s far from a bad person. So let’s cut the man some slack, and be thankful he didn’t pull a Roseanne.

Enter to win tickets to see Trio Da Kali at The Villa Victoria Center of the Arts (Newton, MA) on April 10th. END_OF_DOCUMENT_TOKEN_TO_BE_REPLACED

END_OF_DOCUMENT_TOKEN_TO_BE_REPLACED

Enter to win tickets to Rhye at The Paradise on February 28th. END_OF_DOCUMENT_TOKEN_TO_BE_REPLACED

The Black and Gold continue their run tonight at TD Garden. END_OF_DOCUMENT_TOKEN_TO_BE_REPLACED

Her new album has been pushed back, but we have Kimbra’s new single for you. END_OF_DOCUMENT_TOKEN_TO_BE_REPLACED

Who will make the Class of 2018? END_OF_DOCUMENT_TOKEN_TO_BE_REPLACED

It’s been awhile since we talked Black and Gold. END_OF_DOCUMENT_TOKEN_TO_BE_REPLACED