Why Simone Beaubien should be the next Boston poet laureate 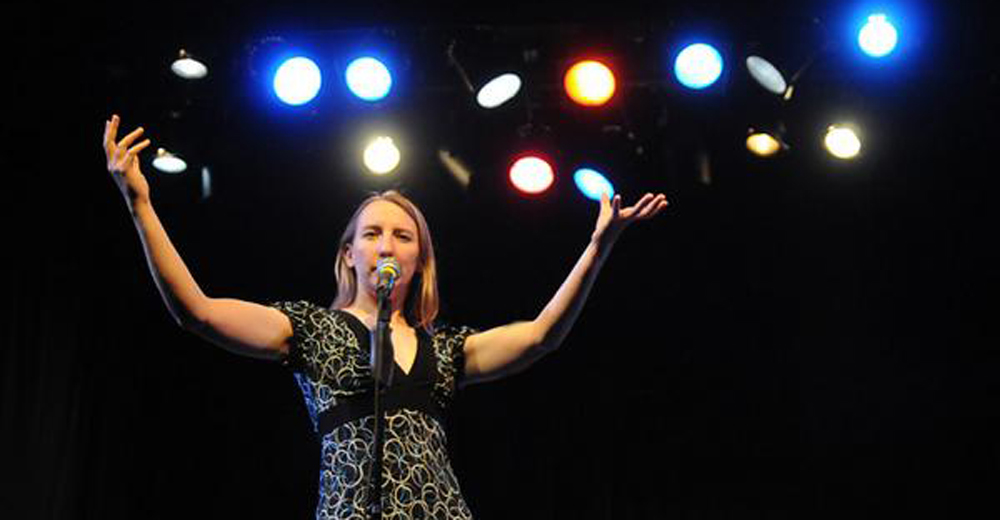 Last week, Boston mayor Marty Walsh announced that a task force has been assembled to to find the city’s second-ever poet laureate. After six successful years in the position, Sam Cornish will be relinquishing his seat to a newcomer, and this is a perfect opportunity to inject some youth, vigor, and innovation into position.

Who better to do this than the city’s foremost slam poet?

City Hall’s press release qualifies that the poet laureate should serve poetry by “raising the status of poetry in the everyday consciousness of Bostonians, acting as an advocate for poetry, language and the arts, and creating a unique artistic legacy through public readings and civic events.” From this, it seems like Walsh’s camp are specifically describing Boston Poetry Slam slammaster Simone Beaubien.

As the chief ambassador of one of the nation’s most renowned poetry slams, Beaubien is one of the most public-facing poets working in the city. In her weekly gathering at the Cantab Lounge, she hosts packed rooms of poetry lovers – many of whom are still experimenting with the idea of poetry. Twice in the past three years, she has singlehandedly brought the National Poetry Slam (and with it, tens of thousands of the most Internet-ready young poets) to the Boston area, and twice it was a heralded record-breaker.

Beaubien’s commitment to popularizing slam is unflinching. Beyond her hosting duties, she is also the booking agent, publicist, webmaster, and coach for the Boston Poetry Slam, she’s been the jack-of-all-trades for poetry’s most modern incarnation. Her resume reads like an instructional guide to resurrecting a dead art.

Though many treat slam poetry as a faction rather than an evolutionary branch, it can’t be denied that performance-based poetry is the most visible incarnation of the art today.  In Beaubien’s hands, Boston poetry is not a dusty tome – it is a vibrant, seething community of folks cycling their energy through the audience. It’s what nurtures the existing scene while simultaneously reaching more and more young writers, growing an art form that has been stunted by textbooks and decades of old-fogey reluctance to adapt.

Boston is not only ready to host a slam poet as our laureate, we’re primed for it. Beaubien has been grinding for years to make the Hub a better city for the written and spoken word, and it’s time she gets the recognition she deserves.

Enter to win a pair of tickets to attend The Hess Collection Seminar and Dinner as part of Boston Wine Festival 2018 at the Boston Harbor Hotel on Wednesday, March 14th. END_OF_DOCUMENT_TOKEN_TO_BE_REPLACED

Artists for Humanity Co-founder Jason Talbot and Major Gifts Director Emily Smaldon were in studio this morning with Mallory Bazinet, Event Manager for GrandTen Distilling. Jason and Mallory talked about The Contemporaries, their upcoming event to launch a new patron group for young professionals. Click here to join them on Thursday, August 17! END_OF_DOCUMENT_TOKEN_TO_BE_REPLACED

Abe Rybeck, founder and Executive Artistic Director of The Theater Offensive was in studio this morning to talk about ClimACTS! Bounce, which celebrates art loud and proud at Royale on Wednesday, May 3. END_OF_DOCUMENT_TOKEN_TO_BE_REPLACED

Aida Villarreal-Licona is the Events Coordinator for SoWa Boston’s Art & Design District. She was in today to talk about their holiday shopping event this Thursday December 15 from 4-8 p.m. at 450 Harrison Avenue. A great opportunity to help local artists and get some holiday shopping done! END_OF_DOCUMENT_TOKEN_TO_BE_REPLACED

Natalie Lemle was in to talk about ArtLifting, a program that aids homeless and disabled artists. Currently, 72 artists in 11 states are receiving 55% of all profits from your purchase of their artwork and photography. Click “more” to hear my chat with Natalie and to see work from one of the artists. END_OF_DOCUMENT_TOKEN_TO_BE_REPLACED

Melanie Gillespie is an author and the founder of Mel O’Drama School of Acting in Milton. She was in studio this morning to talk about her latest book Darlene and the Drama Queen and how acting can help kids to develop confidence. END_OF_DOCUMENT_TOKEN_TO_BE_REPLACED

We’re not suggesting coconuts migrate, but we are suggesting that you see Spamalot at North Shore Music Theatre, two weeks only, September 27 through October 9. Click here to grab your tickets, and click “more” to hear my interview with Brad Bradley, who plays Patsy. END_OF_DOCUMENT_TOKEN_TO_BE_REPLACED