Why is everyone obsessed with this dumb ‘Flappy Bird’ app? 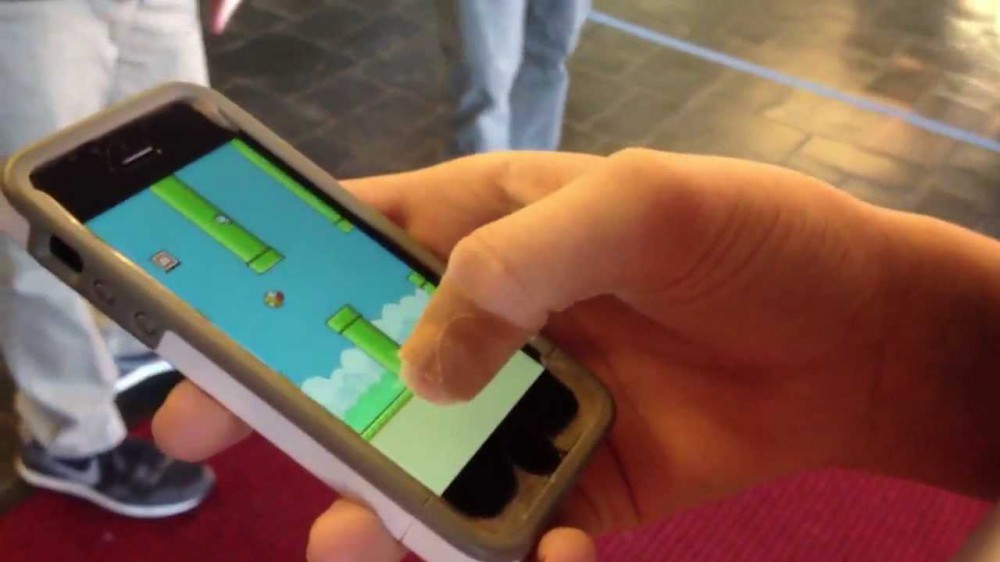 I’ve never been much of an app enthusiast, much less a gamer. Perhaps it was the constant throwing of Super Nintendo controllers as a child that had me realize that I both wasn’t good at video games, and couldn’t get a grip on my frustration. This past week, I was able to witness other gamers, some very close to me, get sucked into a similar vortex of smartphone gaming rage, and I loved every second of it.

“Flappy Bird” was first uploaded in May 2013 by Vietnamese developer Dong Nguyen, but the game has seen an incredible spike of new users and high ratings in the past week. It has quickly taken over the No. 1 ranking on the Apple app store, ahead of YouTube, Facebook Messenger, and other widely-known mobile tools. The game is free, and it’s incredibly simple. There’s a pixelated, dumb-looking bird flapping its stupid wings and by touching the screen of your phone, you can make it float past some really uncreative obstacles. The further you can make your bird fly, the better you have done in the game.

It’s not that simple though, as I am assured by my typically non-animated roommates, who grip their smartphones with ire as they exclaim basically every one of the seven dirty words. Daniel Schiffer, one of these roommates, just arrived back in Boston after attending the International Consumer Electronics Show in Las Vegas. One would think he would’ve come bearing the latest in expansive mobile programming, but instead he is the kingpin in my apartment’s out-of-control “Flappy Bird” spiral.

“The draw is that it’s both painfully addictive and extremely simple at the same time,” he says. “Even similar games like ‘Temple Run’ become different, and harder as you progress, and you can collect coins. With ‘Flappy Bird,’ it’s literally the same thing every time, so when you fail, which is also every time, you have nobody to blame but yourself.”

So what is the draw, if there is basically no way of feeling accomplishment from the game? The best answer is greed. No matter how far you get your shitty bird to fly, it’s never far enough. You could be happy with a high score, until you try to beat it and fail miserably, once again sinking back into that bleak pit of defeat. It’s a hilarious and sad experience watching a room full of 20-somethings, who grew up with constant advancements in gaming technology, want to resort to soulless things after letting their birds sink to a forgettable death.

My roommates aren’t crazy though, they’re just American. Schiffer admits that his greatest motivation to keep playing the game is to beat the high score of another roommate. It’s all about getting ahead, and when it doesn’t work out, unexplainable madness ensues. Gamers all over the country are experiencing bouts of rage due to this unforgiving app. With over 480,000 reviews on the Apple app store (which are very entertaining to read), most reviews take similar shape to these:

“I came to the App Store as a happy girl that got good grades, had friends, and occasionally left the house. Then I found this app called Flappy Bird. The game finished loading and I opened it and that’s when I felt the devil himself enter my being.”

“‘DOWNLOAD FLAPPY BIRD,’ they said. ‘IT WILL BE FUN,’ they said. That night I went to McDonald’s and played Flappy Bird for seven hours. When I didn’t come home, my husband got worried and called me. I explained to him the situation, and he came to pick me up.”

“Flappy Bird is the scary noises you hear while trying to sleep. It’s the monster under your bed, and the suffocating darkness that consumes you when alone at night.”

America has spoken, and “Flappy Bird” sucks in the most entertaining way possible. Competitive types, beware: a download of “Flappy Bird” will most definitely change your life for the worse. You’re going to do it anyway though, because you’re weak. Simplicity is the name of the game, and if you think you’re better than that puny bird, you’re not. Schiffer himself has now fallen victim to this meta Avian flu and is quick to warn, “Anyone can pick it up, but nobody, and I mean nobody, can put it down.”

HUBweek came to Boston, and we were there to take it all in. END_OF_DOCUMENT_TOKEN_TO_BE_REPLACED

This should never have happened. END_OF_DOCUMENT_TOKEN_TO_BE_REPLACED

I spend far too much time on Twitter. Here’s a handful of posts from last year that I found to be entertaining on one level or another. Enjoy. END_OF_DOCUMENT_TOKEN_TO_BE_REPLACED

Apologies in advance for burying this in your skull forever. END_OF_DOCUMENT_TOKEN_TO_BE_REPLACED

If you like cover songs, you’re gonna love this. And by love, we mean probably hate. END_OF_DOCUMENT_TOKEN_TO_BE_REPLACED

Whether you celebrate the unofficial beginning of summer on Memorial Day weekend, or Meteorological Summer on June 1, or the Summer Solstice, make no mistake: summer is here. END_OF_DOCUMENT_TOKEN_TO_BE_REPLACED

The nu-metal mainstays have covered the unlikeliest of songs. END_OF_DOCUMENT_TOKEN_TO_BE_REPLACED