Why every Boston hockey fan should be rooting for David Warsofsky 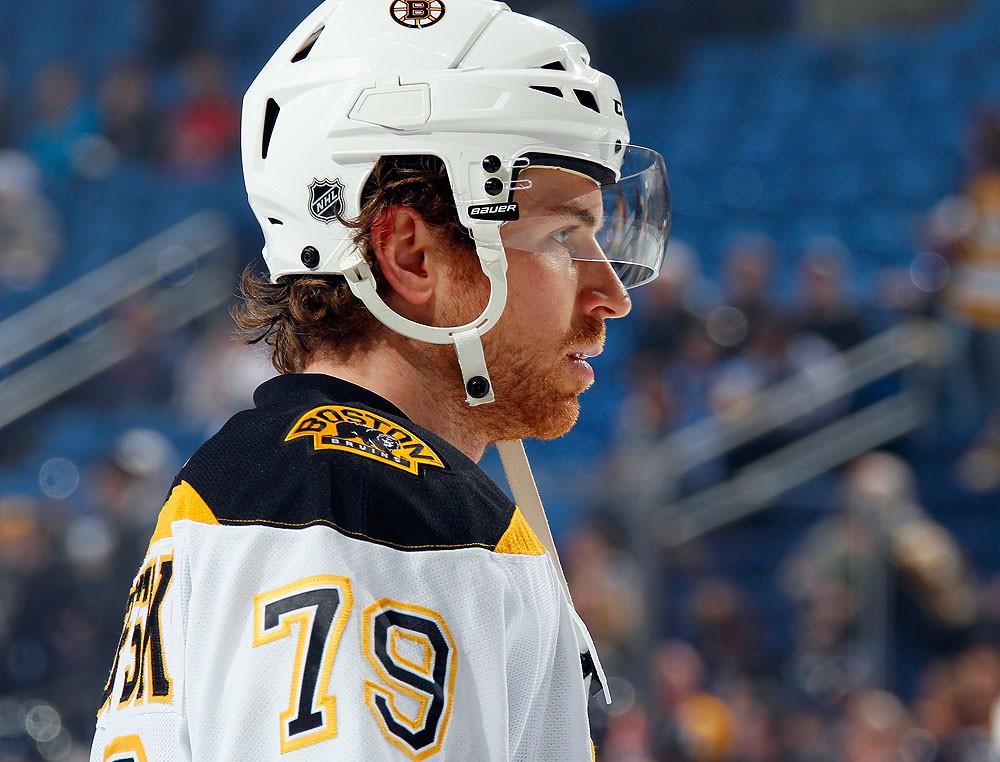 As the Boston Bruins get set to resume their season tomorrow night against the Buffalo Sabres, they’ll be doing so without rookie defenseman David Warsofsky.

Though the 23-year-old Marshfield native played admirably in his tours with the big club this season (averaging over 19 minutes per game in his latest run), Warsofsky was sent down to Providence prior to the Olympic break. There, he will await his next chance to crack the top 6.

And Hub hockey fans should be hoping that chance comes.

“Every kid wants to play in the NHL full-time, and I’ve been fortunate enough to have a taste of that this year,” Warsofsky says in an interview with BDCwire, “so I want to work toward being an NHL regular, and hopefully I get another chance to, another opportunity, to perform in that role again.”

He’s right – any local mire who’s ever picked up a hockey stick has dreamed of taking the ice on Legend’s Way. Growing up with hockey-crazed older brothers, Warsofsky participated in driveway scrimmages, dreaming of being an NHLer like Ray Bourque or Bobby Orr. We’ve all been that kid.

The first thing you do when you sign an NHL contract is defy the odds. The number of youth players that make it from peewee to the Show is incalculably small, especially in a hockey hotbed like Massachusetts. Over the 90-year history of the Bruins, only 61 Bay State-born players have put on the Spoked B. Because of this, “Hometown Kid Goes Big” is always a selling headline in the local papers.

A talented puck mover and goal scorer, Warsofsky led the Marshfield High School Rams with 22 goals and 18 assists his freshman year before transferring to Cushing Academy. There, Warsofsky was given the opportunity of a lifetime – the chance to refine his game under assistant coach (and former driveway idol) Ray Bourque.

“It was something that I never even thought of that could happen,” he says. “You grow up watching him, and then a couple years later, he’s your coach and he’s telling you what to do.”

Under the mentorship of Bourque, Warsofsky flourished, tallying 49 points en route to being named the school’s defenseman of the year. His play with at Cushing and, later, with the United States National Team Development Program earned him his pick of NCAA teams. So he did what any starry-eyed kid would have done and committed to play for the team he’d followed his whole life.

“When you’re from Boston, it’s one of those things where you either root for BU or you root for BC, and I was always brought up a BU fan,” says Warsofsky, who grew up in the same neighborhood as former Terriers and Bruins center Mike Sullivan. “Fortunately for me, I was able to go and fulfill my childhood dream of playing there.”

This was not the only childhood dream he’d fulfill at Boston University. Before he could even pull on the red-and-white sweater, Warsofsky lived the ultimate fantasy when was drafted by the St. Louis Blues in the fourth round (95th overall) of the NHL draft. Though it was disappointing that his hometown Bruins hadn’t selected him, Warsofsky was too overjoyed nonetheless.

“When you’re younger, you want to get drafted to your hometown team,” he says. Looking back, “I was just fortunate enough to get drafted. So, no matter what team it was, I was excited.”

The next two years were a blur of consecutive successes. In 2008-2009, Warsofsky played 45 games for BU en route to a thrilling victory in the Beanpot final, where the Terriers bested Northeastern 5-2. His 23 points and plus-26 rating that season carried BU to the NCAA Men’s Division I Ice Hockey Tournament, where the no. 1-ranked Terriers played for top honors. Warsofsky opened the scoring in the championship match by assisting on Chris Connelly’s goal, and BU would win in dramatic fashion, beating Miami of Ohio in overtime for their fifth national title.

As a sophomore, he represented the United States in the World Junior Ice Hockey Championships. With Warsofsky on the point, the US team went on to win gold over perennial powerhouse Canada in overtime, marking one of the most stunning and memorable tournaments to date. Three days later, he was suiting up with BU again in the inaugural Frozen Fenway game against Boston College. There, in the shadow of the iconic green monster, Warsofsky boomed a slapshot past the BC keeper en route to an unforgettable 3-2 victory. Not a bad last highlight for his career in Beantown.

Of course, that wouldn’t be the end. In June of that year, Warsofsky was auspiciously traded from the Blues to the Bruins, giving him a second chance to pull off the miracle he’d dreamed about since he wore a size 3 skate.

The conflation of fortune and redemption was cinematic, but Warsofsky would have to toil in the minors for three seasons before finally being called up to the pro squad this season on Dec. 19. After a seesaw week of being reassigned and then called up again, he scored his first goal against the Ottawa Senators on Dec. 28 – an absolute rip that knotted the game at 3.

The next day, Warsofsky was sent back down to Providence, where he would wait until earlier this month to be brought back up. With Zdeno Chara headed to Sochi early to carry the torch for Slovakia, Warsofsky clawed his way up again, playing in two games before being sent back down ahead of the AHL All-Star break. Though he sits behind fellow newcomers Torey Krug, Matt Bartkowski, and Kevan Miller on the depth chart, hockey fans should be rooting for Warsofsky to edge out a permanent spot on this Bruins roster.

“Sometimes, I have to take a couple steps back and realize the things that I have accomplished,” Warsofsky says. “It is a dream come true. It’s one of those things that I’ve worked for my whole life, and I’ve been very fortunate that the chips have fallen my way, and I hope they keep on doing that.”

The trope of the scrappy underdog is overwrought, but, in the hockey community, it’s still goosebump fuel. A diminutive kid with colossal ambitions and a flare for the dramatic, Warsofsky not only embodies the ideal of the hometown hero but also sets the mold for a new norm. He’s someone who hedged his luck to live a far-fetched dream every step of the way. It’s enough to curl the lips of even the most stone-faced puckhead.

Warsofsky’s career arc is something beyond even the imagination of a 5-year-old lacing up for the first time. It’s the future we once saw for ourselves. If Warsofsky manages to reclaim that success on the pro scale, kids in the Codfish State will have a new player to emulate when they’re slapping tennis balls in the driveway.

At least that’s what we should be hoping for.

The Black and Gold continue their run tonight at TD Garden. END_OF_DOCUMENT_TOKEN_TO_BE_REPLACED

Who will make the Class of 2018? END_OF_DOCUMENT_TOKEN_TO_BE_REPLACED

It’s been awhile since we talked Black and Gold. END_OF_DOCUMENT_TOKEN_TO_BE_REPLACED

You’re going to wish you were in the Northern Alps. END_OF_DOCUMENT_TOKEN_TO_BE_REPLACED

END_OF_DOCUMENT_TOKEN_TO_BE_REPLACED

Bill might be “on to Tennessee,” but we’re not. END_OF_DOCUMENT_TOKEN_TO_BE_REPLACED