Why Doesn’t Chewbacca Have Grey Hair in the New ‘Star Wars’ Trailer? 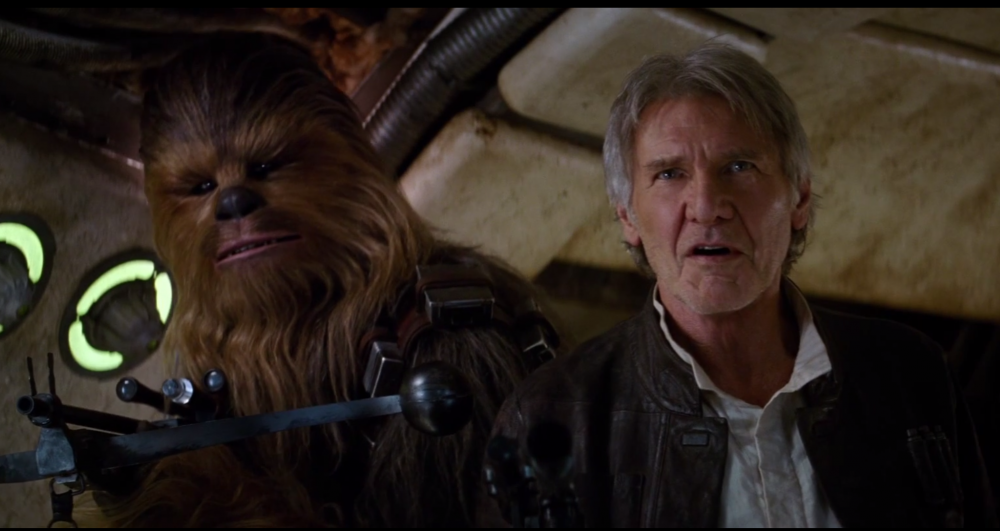 All was right in the galaxy when Harrison Ford made his epic return as Han Solo with his sidekick Chewbacca in the new Star Wars: The Force Awakens trailer. In the clip, we see that Han Solo has aged with time but one Twitter user noted that his side-kick Chewbacca seems to remain exactly the same.

Why doesn’t Chewy have grey hair? Like when a dog gets old & it gets grey around their face. #StarWarsCelebration pic.twitter.com/omDXgkpBWP

For starters, we do know that Wookiees, such as Attichitcuk — Chewbacca’s father — are able to have grey hair. It’s not as if they are immortal and never grow old. For those unaware, Wookiees are a species of furry humanoids.

Andy Mangels — author of Star Wars: The Essential Guide To Characters (First Edition) — explained in an e-mail that Itchy was introduced in the 1978 The Star Wars Holiday Special and at the time was 350 years old.

“Chewbacca’s age circa Star Wars: A New Hope was 200 years,” he said. “So, it stands to reason that if Chewbacca aged like this father, he could go grey sometime in the next 150 years.”

He adds that, to his knowledge, the timeline in the movie is progressing in real time. Since A New Hope was released 38 years ago, Chewy would be almost 240 years old. With that said, Mangels is willing to bet “he has a bit more grey in this one, even though we only saw a brief shot in the trailer.”

A representative for Lucasfilms could not immediately be reached for comment but writer Alan Foster speculated in an e-mail that Wookiees have different DNA which could explain why Chewie still has his youthful locks. But it’s important to remember that their lifespan can last over hundreds of years.

@sarahkarpward wookiees don’t start to look u til their 900 years old. I got really geeky there lol

While Ford may have aged, it seems to be reasonable that our furry friend has no grey hair. Perhaps there is no one answer explaining the aging process of Wookiees but we should all take notes on his beauty regime as he is looking incredible for someone who is over 150 years old.

Golden Globe and Emmy nominee Benjamin Wallfisch is the composer responsible for the score of the hit movie IT. I talked to Ben about his approach to scoring the new version of this iconic story and his thoughts on film and music overall. Some very insightful commentary; listen in. END_OF_DOCUMENT_TOKEN_TO_BE_REPLACED

Rupert Gregson-Williams is an award-winning film composer. He just so happened to compose the score for this summer’s big blockbuster Wonder Woman. We talked about his beginnings in film scoring, film scores that move and inspire him and, of course, Wonder Woman. END_OF_DOCUMENT_TOKEN_TO_BE_REPLACED

Jeff Rapsis is a New England-based composer and performer. Lately, he’s been creating live musical scores for silent film screenings. I talked to him about his process and a few of his upcoming performances at The Capitol Theatre in Arlington and the Somerville Theatre. You can keep track of where else Jeff is scoring silent films here. END_OF_DOCUMENT_TOKEN_TO_BE_REPLACED

Planning on seeing Rogue One: A Star Wars Story when it opens this weekend? I joined Adam 12 to give you an idea of what to expect. But don’t worry, I didn’t give anything away. END_OF_DOCUMENT_TOKEN_TO_BE_REPLACED

No, not from afar, from the comfort of her couch. From the actual awards themselves. That’s where Meredith Goldstein was for the Oscars. She shared all the juicy, first-hand details with me. END_OF_DOCUMENT_TOKEN_TO_BE_REPLACED

To celebrate the opening of ‘The Force Awakens,’ I had some very special guests in studio to start the Thursday, December 17 edition of The Brink. Listen. END_OF_DOCUMENT_TOKEN_TO_BE_REPLACED

Watching the new Star Wars trailer a million times gave us all sorts of feels. And one of those feels was nostalgia. END_OF_DOCUMENT_TOKEN_TO_BE_REPLACED

END_OF_DOCUMENT_TOKEN_TO_BE_REPLACED

If you’ve finally finished crying over Inside Out — or Lava, the short that ran before it — Pixar is readying another assault on your tear ducts with The Good Dinosaur, if its newly released trailer is any indication. END_OF_DOCUMENT_TOKEN_TO_BE_REPLACED