Who will the Boston Calling mystery band be? A few guesses 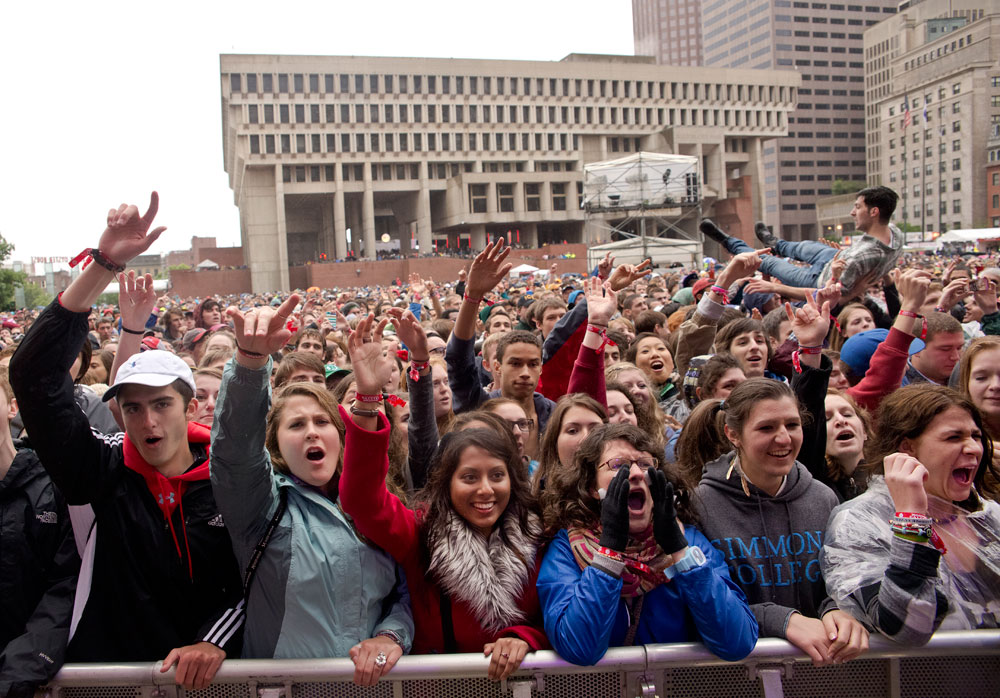 This spring’s Boston Calling lineup was announced earlier this week, and judging by Twitter’s collective reaction (seriously, we read a ton of tweets), and based on the fact that pre-sale tickets are already sold out, folks seem to be quite smitten with this festival’s bill. One peculiar part that stood out, however, is that one major act near the top of the bill has yet to be announced. What’s so goddamn special about this act, huh? Reactions to our Facebook post suggested that it might be another local, perhaps Gentlemen Hall, Bad Rabbits, or CliffLight. Well, we have a few hypotheses as to who it might be.

Many seem hopeful that the Atlanta hip-hop legends will make a Boston stop this year, especially since the duo announced it would be playing over 40 festivals this summer. After last fall’s Boston Calling, it’s clear that the event is open to large hip-hop and dance acts, as well. The only indication that this may just be a dream is that the slot on the Boston Calling flyer reserved for the unannounced special guest is not directly at the top.

The local rockers already played Boston once this year, but for an event that is quickly becoming a Boston staple, Frank Black and friends would seem appropriate.

An electronic act of some sort

The lineup is very rock-heavy as is, so to diversify it, a big name DJ act or household dance pop name could pique the interests of a whole different crowd. And after last fall, it’s clear that Boston likes to get down on occasion.

The ’80s alt-rock champs resurfaced for a few festivals last summer, and even recruited a Boston musician to play guitar (David Minehan, frontman of legendary locals The Neighborhoods, who now runs Woolly Mammoth Sound in Waltham where he let us record this video with GEM CLUB). With some of the throwback acts that make up the bill already, The Replacements would not only fit in but lead the pack.

We aren’t the only one’s with theories, though. As a matter of fact, the Twittersphere and Facebook world was quite vocal about that, too. Here are some of the predictions or requests, that people threw out there:

The Killers #FingersCrossed RT @BDCwire Who do you think is the #bostoncalling mystery band? Who do you WISH that it could be?

Excited for @Boston_Calling again this year! Gonna guess the TBA is either @fosterthepeople or @broken_bells … #BostonCalling

Crap. Thought it was WARRANT, not WARPAINT. Now sad it isn’t. And that Jani Lane is dead. Thanks @Boston_Calling. http://t.co/tj8ktX3VKh

I’m hesitant to believe @Outkast is the TBA #bostoncalling artist because their graphic designer would need to redo the hierarchy if so. 😛

question of the day, is @arcadefire the final performer at #BostonCalling?

PLEASEEEE. RT @taypeps: What I would give to have @Outkast at the #bostoncalling festival

I hope the unannounced headliner at Boston Calling is Kesha.

@boston_calling not enough diversity this round… need to add @diplo, @dillonfrancis or @djsnake to the mix cc: @BDCwire — Erin S (@EScholo) January 29, 2014

What if Foster the People is the to be announced headliner at Boston Calling I’m freaking out — Josie Foster (@JosieGresko) January 30, 2014

Is the to be announced band Foster the People bc if it is I’m going to choke on my own spit while screaming (in a good way) @Boston_Calling — Josie Foster (@JosieGresko) January 30, 2014

If that unannounced band for Boston Calling is Vampire Weekend or Noah and The Whale, I’ll loose it. — K-Marx (@Doctor_Bony) January 28, 2014

.@dseide1983 @Boston_Calling the worst part is they’re probably going to add Outkast and then I’ll have to buy a ticket. — Kevin Jackson (@kevineverett4) January 28, 2014

@mattandkim Please come to #bostoncalling again this year! Balloons in the rain was the best part of the festival.

Enter to win tickets to see Trio Da Kali at The Villa Victoria Center of the Arts (Newton, MA) on April 10th. END_OF_DOCUMENT_TOKEN_TO_BE_REPLACED

END_OF_DOCUMENT_TOKEN_TO_BE_REPLACED

Enter to win tickets to Rhye at The Paradise on February 28th. END_OF_DOCUMENT_TOKEN_TO_BE_REPLACED

END_OF_DOCUMENT_TOKEN_TO_BE_REPLACED

Enter to win a pair of tickets to attend The Hess Collection Seminar and Dinner as part of Boston Wine Festival 2018 at the Boston Harbor Hotel on Wednesday, March 14th. END_OF_DOCUMENT_TOKEN_TO_BE_REPLACED

Her new album has been pushed back, but we have Kimbra’s new single for you. END_OF_DOCUMENT_TOKEN_TO_BE_REPLACED

The folk duo returns with a new record this week. END_OF_DOCUMENT_TOKEN_TO_BE_REPLACED

Now that we’re done looking back at 2017, let’s look ahead at 2018. END_OF_DOCUMENT_TOKEN_TO_BE_REPLACED