Who Cares How Millennials Date One Another? 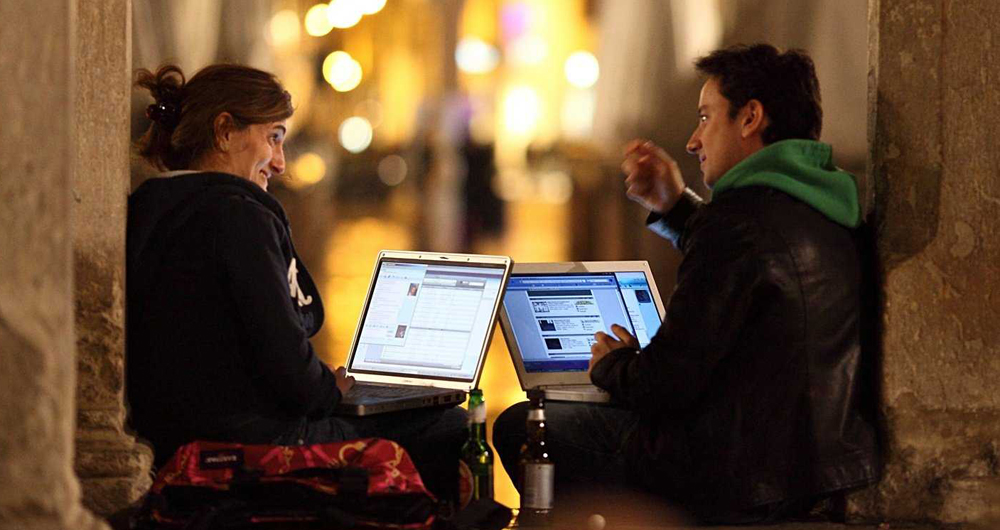 The Boston Globe published a story Friday about one Boston College professor’s effort to “revive the lost art of dating.” The prof, bless her good intentions, is offering extra credit to students that go on real face to face dates, brought about by an in-person proposal. She wants students to forgo the smart phone generation’s preferred course of romantic interaction, which is apparently to smash genitals with strangers, and instead employ the bygone practice of courtship, in all its yawn-and-stretch-and-drape-that-arm-over-her-shoulder glory.

Quote: “[D]ating is so rare it feels strange and even creepy. Instead, students use friendships and groups to satisfy social and emotional needs and see hookups as purely physical. But as a result, [Professor Kerry] Cronin says, students don’t have a relationship that allows them to address the confusions or expectations that can arise out of hookups.”

There’s nothing wrong at all with promoting healthy relationships and addressing these points of confusion, especially considering, as the most recent Census data suggests, 100% of all the country’s college students are lubberly squids that need all the help they can get in this regard. The problem is the idea these people have somehow betrayed traditional values by not navigating the romantic landscape as their parents did.

Admittedly, it’s easy to prove a point with Internet comments on any given story, but you’ve very likely seen this attitude a million times over, so it’s hardly cherry-picked:

“[S]o many missed opportunities because people are looking at their smart phones instead of what’s around them! The technology generation has unfortunately made social etiquette and customs quaint and old fashioned.”

“[T]hey run into each other and hook up,” added another. “Then there’s 9 texts or so and if there’s a tenth text then they’re a couple.”

So if two people communicate with one another for a while and they seem to like having the other’s sex parts in or around their own, they become an item? That sounds more or less exactly how relationships have gone since time immemorial.

There likely is some validity to the idea that more relationships today start in the bedroom, rather than, say, on a Ferris wheel or over a singular milkshake with two straws, but is that inherently a bad thing? It’s no longer taboo to have sex – never mind before marriage – with anyone whose sex-making seems possibly compatible with one’s own, so long as it is safe and consensual.

Today, that briefly changed, as the hashtag #TheWorstPartofDepressionIs trended worldwide on Twitter, sparking a conversation on an issue many find difficult to discuss. END_OF_DOCUMENT_TOKEN_TO_BE_REPLACED

I’m in my mid-twenties, and I’ve been working as a substitute teacher for the last couple years (I joined Teach for America right out of college). I know some of the girls in classes I teach have crushes on me — high schoolers aren’t very subtle — but I brush it off, because I’m not an idiot. Last week, however, I got a disturbing email from a girl in the English class I subbed for. Pictures were attached. You get the gist. What do I do about this situation? I obviously haven’t responded, but I’m afraid she might go Lifetime-movie on me. END_OF_DOCUMENT_TOKEN_TO_BE_REPLACED

Ridiculous doesn’t even begin to capture all that transpired, from the storm of emojis to the storming and barricading of Jordan’s house by a cavalcade of Clippers. END_OF_DOCUMENT_TOKEN_TO_BE_REPLACED

My friend has a dog, and she’s always been kind of half-assed about caring for it. I’ll see her out at a party or a barbeque all day long, so I know the dog is home alone, and sometimes she goes out right after she finishes a shift (she’s a waitress, so that might be pretty late), without even going home to feed the dog or let it out. The other day, though, I went over to her house and realized things have crossed a line. There were piles of dog feces in a couple of corners, and the entryway rug was soaked in urine when we walked in. She laughed it off and called the dog naughty, then cleaned up the poop and basically ignored it. I’m worried about the puppy, and about my friend; what kind of person does that to an animal? Should I call animal control on her? END_OF_DOCUMENT_TOKEN_TO_BE_REPLACED

My friend drives drunk. A lot. And not just “one drink too many” drunk, more like “in obviously rough shape” drunk. It not only makes me scared for her, it makes me angry: She could hurt herself or someone else, and there’s really no excuse in the era of Uber. I’ve tried talking to her about it, but she brushes it off or claims she won’t do it again, but then does, anyway. I’ve been tempted to call the cops on her just to get her to stop doing this. How do I convince her it’s not worth it before something terrible happens?  END_OF_DOCUMENT_TOKEN_TO_BE_REPLACED

Earlier this month, we posted a story about Rob, a man falsely accused of being a sex offender. END_OF_DOCUMENT_TOKEN_TO_BE_REPLACED

It’s also one that the NFL’s report can’t properly answer. Nor can the New York Daily News, despite its screaming front pages. END_OF_DOCUMENT_TOKEN_TO_BE_REPLACED