Which Beers to Pair With Your Favorite Halloween Movies 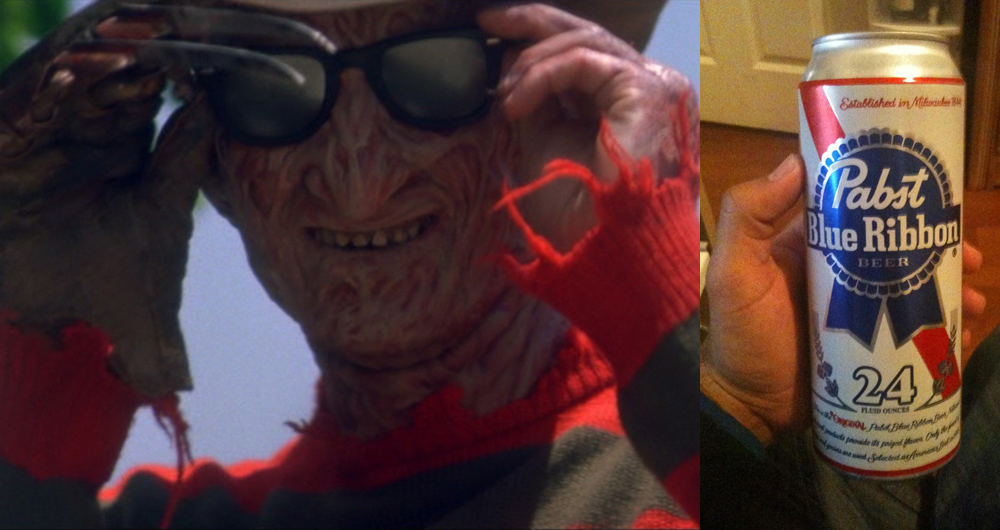 Candy corn, creepy pop-up costume stores, and random Christmas displays are here, which means only one thing: it’s October. And with this month comes an abundance of whimsical, cheesy, pee-in-your-pants scary films celebrating the bewitching holiday that is Halloween. So what better way to ring in the season than to sit down, get a little tipsy, and watch Freddy Krueger as he tears apart the dreams of innocent little children? I spoke with an Atlanta bartender and former co-worker Devlin Bolton, who shared some insight into the interesting ways to pair your favorite Halloween movies with your favorite brews.

If you’re watching Friday the 13th, you’re probably going to want to sit down and grab yourself some Dead Guy Ale. As Devlin puts it, this beer “will take you on a roll,” with its nice balance between a dark, smooth malt and a crisp, spicy bitterness—an appropriate complement to the cringe-worthy scene where Kevin Bacon lights a joint and then gets stabbed in the throat.
And after about 20 minutes into the screaming and slashing that comprise this iconic Halloween movie, you’re going to understand why Dead Guy Ale has a slight nuttiness to it. This nuttiness will get you through those scenes where you stare at the guy in the white hockey mask and wonder, “What the hell are you doing with your life, Jason?”

When it comes to Nightmare on Elm Street, I highly suggest that you grab not one, but two beers as the dream-invading, wisecrack “hipster” that is Freddy Krueger scares some teenagers shitless. Hipster? you may wonder. Devlin explains: “Think about it. He’s got the striped sweater, the fedora, the black cords. Freddy Krueger is clearly a hipster.” And there’s nothing better than watching this indie murderer whisper “Come to Freddy” as you reluctantly sip the cheap, watery, yellowish beer that only the coolest call “PBR.”
Now on a more serious note, if you’re like me and you take horror films to heart, you’re probably going to want to follow that blue-ribbon can with a sip of Wild Heaven’s Ode to Mercy. The important thing to know about this beer is that it has hints of coffee in it, and coffee is vital if you want to stay awake and, of course, avoid death at the hands of a fedora-sporting hipster.

There’s something about Hocus Pocus that draws in a wave of nostalgia, reminding you of the uncomfortable look on your dad’s face when you asked him what a virgin was, and why exactly Bette Midler needed one to bring her and the witches back to life. So what better way to re-live (or re-vamp) these childhood memories by curling up with a nice cup of apple cider — Woodchuck Hard Cider, that is.
The “Fall Harvest” seasonal has cozy, inviting notes of vanilla and cinnamon and pours a warm amber shade–slightly bubbly, but perfectly crisp. And the light hints of wood in the background are reminiscent of the time period in Salem when, you know, witches like pre-Sex and the City Sarah Jessica Parker were burned at the stake.

If you’re going to watch the hour-and-a-half of shaky footage that is the Blair Witch Project, chances are you’re probably going to get a little nauseated. So if you want to sip on something that accurately reflects this nasty nausea, you may as well go for the broke college student’s top choices: Steel Reserve 211, Natural Ice and you guessed it, Four Loko. As Devlin so flawlessly puts it, “They will make you throw up.”

Whether you watch the 1979 version or its 2005 remake (featuring a bearded Ryan Reynolds), the only beer that suits the delirium taking place  in the creepy Long Island home is, namely, the beer Delirium. With its deep plum notes and sweet bready malt, this strong Belgian ale sets the tone for one of the eeriest haunted house movies of all time, which happens to be based on a true story.
Writer Stuart A. Kallen even nominated it as “best beer in the world” during the World Beer Championships (yes, that’s a thing). It’s so good, in fact, that the beer is named after the “Delirium tremens,” or “shaking frenzy” a person gets from alcohol withdrawal. So relax and enter a state of satisfaction and pure confusion as Delirium helps you savor each moment of this classic film’s paranormal creepiness.