What Revere’s casino vote means for East Boston and you 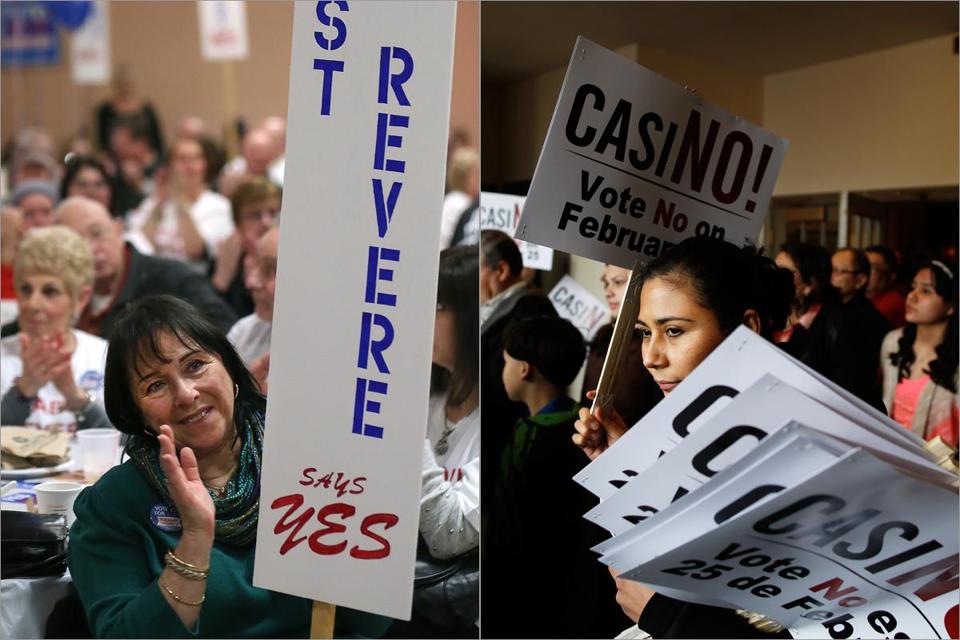 On Tuesday, the people of Revere voted — overwhelmingly — in favor of building a casino at the Suffolk Downs racetrack, right at the East Boston border. While the vote by no means guarantees that a casino will be built in that specific location, it does mean that gaming is almost certainly coming to the Hub. The only question is, where?

Right now, there are two plans, both competing for the sole casino license the state government will be awarding in the Boston area: Mohegan Sun at Suffolk Downs and one pushed by gaming magnate Stephen Wynn in Everett. The state gaming commission is expected to choose which site to award the license to in June. Both are within spitting distance of Boston, and so far, it seems like the city will have very little say in how either casino will operate. With much of the traffic to either site congesting Boston, not to mention the fact that any casino built will draw much of its revenue from Boston residents, that’s a problem. And the fact that siting a casino at Suffolk Downs totally disregards the will of the people of Boston is just rubbing salt on the wound.

If a vote for a casino at Suffolk Downs sounds familiar, that’s because there already was one, during the mayoral election last November. In that vote, the people of East Boston said no to the idea of a casino at the racetrack, whose property straddles the line between Eastie and Revere (Revere also voted, and they supported the casino). So Suffolk Downs threw together a new design, with the whole project located a couple hundred yards down the road in the Revere section of the property, and called it a new plan. If the gaming commission awards the license to Suffolk Downs, East Boston will be saddled with a casino at a site they specifically rejected, with none of the cash payouts or tax revenues they were originally offered. A neighborhood that can’t catch a break once again will get the short end of the stick.

Some might think that gambling is great news for Boston, and those people can look forward to a high quality resort casino opening in the metro area in about three years time. There are others who look at gaming and only see the crime, traffic and addiction problems it feeds. And those people are taking action. This summer, thanks to the hard work of anti-gaming activists across the state, the Massachusetts Supreme Judicial Court will decide whether or not a question asking for the repeal of the gaming law could be added to the ballot. If it is allowed, then the fate of the casinos will rest squarely with the voters. The gaming commission disregarded the people of East Boston the first time around. If a ballot question is approved, they might not have that luxury again.

Enter to win a pair of tickets to attend The Hess Collection Seminar and Dinner as part of Boston Wine Festival 2018 at the Boston Harbor Hotel on Wednesday, March 14th. END_OF_DOCUMENT_TOKEN_TO_BE_REPLACED

Boston band Funeral Advantage is Tyler Kershaw. And Tyler Kershaw had a fun childhood, so it seems. END_OF_DOCUMENT_TOKEN_TO_BE_REPLACED

Perry put me on to daephne and the album blew my mind. END_OF_DOCUMENT_TOKEN_TO_BE_REPLACED

END_OF_DOCUMENT_TOKEN_TO_BE_REPLACED

I’m in my mid-twenties, and I’ve been working as a substitute teacher for the last couple years (I joined Teach for America right out of college). I know some of the girls in classes I teach have crushes on me — high schoolers aren’t very subtle — but I brush it off, because I’m not an idiot. Last week, however, I got a disturbing email from a girl in the English class I subbed for. Pictures were attached. You get the gist. What do I do about this situation? I obviously haven’t responded, but I’m afraid she might go Lifetime-movie on me. END_OF_DOCUMENT_TOKEN_TO_BE_REPLACED