What I learned from attempting (and failing) the Oscar Blitz 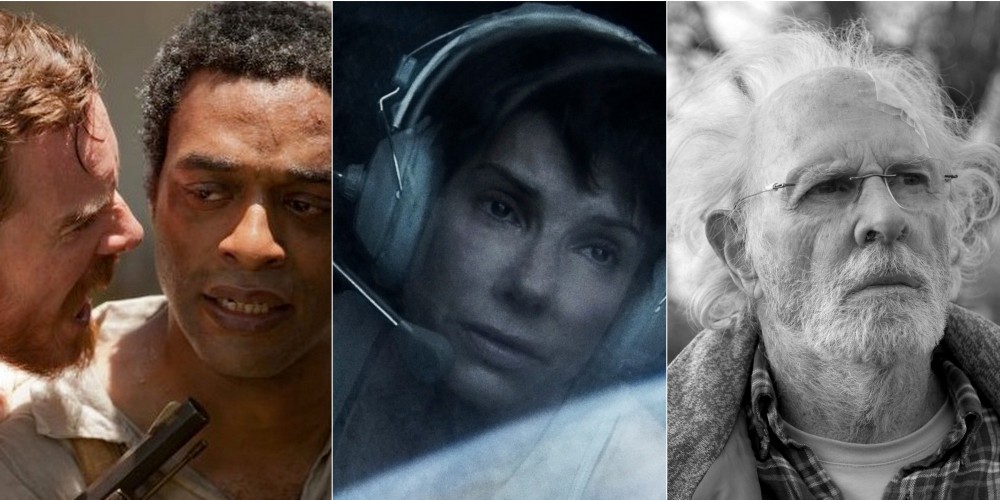 The plan, at first, was simple: watch six Best Picture nominees in theaters over the course of 48 hours. Start with “American Hustle”; grab some tissues; don’t overdo it on the Junior Mints. Little did I know that an Oscar blitz would restore my appreciation and enthusiasm for film completely—and that there was no way in hell I’d make it through such a challenge without my emotional bandwidth getting ripped to shreds.

Of the nine movies dubbed the greatest for the 86th I’d seen two, “The Wolf of Wall Street” and “Gravity,” when I walked up to Williamsburg Cinemas on a Friday night in early February. The band I had interviewed earlier that evening wasn’t going on until around midnight, so I had a couple of hours to kill, and was stoked when I realized that David O. Russell’s latest endeavor—one of the only awards season contenders I was interested in seeing, really—was starting exactly at the moment I’d arrive at the theater. When I got there, I sulked: I had confused the start time of “American Hustle” with that of “Her,” Spike Jonze’s bizarre Siri-inspired love story, which I had no desire to see whatsoever. My phone was dying, my house in South Brooklyn was too far away to double-back in between the band interview and the show later, and, well, I was there already. What the hell, right? I opted to take a chance on “Her.” The inspiration gleaned from the unconventional romance lead to a slightly insane lapse in judgment. If I dug “Her” so much, I’m sure there’d be other Oscar contenders I’d love, too—and that’s where the idea for the Oscar blitz took root.

I booked tickets to catch “American Hustle” the next afternoon, and figured that between that Friday night and 11:59pm on Sunday, I’d be able to catch the other five remaining movies on my Best Picture check list: “Nebraska,” “Philomena,” “Dallas Buyers Club,” “12 Years A Slave” and “Captain Phillips.” That accidental showing of “Her” triggered an epic pursuit, one that I knew would fry my feelings and pulverize my wallet—hey, movies are stupid expensive!—but the pros outweighed the cons. As a New Yorker, I have the privilege of living in one of two cities (the other being Los Angeles) that show pretty much every Oscar contender in the weeks leading up to the Academy Awards. I’d get to see the best movies of the year on the big screen in their purest form. I’d need to pace myself, for multiple reasons. Watching “Nebraska” and “Philomena” in the same evening would likely result in a snooze fest, as the trailers for either film didn’t exactly enthrall me; there was no way in hell was I going to sit through “12 Years A Slave” and “Dallas Buyers Club” in the same evening if I wanted my tear ducts to function normally ever again.

I compared movie times, neighborhoods, distances in between theaters and plot points, and settled on the following itinerary: “American Hustle,” “Nebraska” and “Dallas Buyers Club” for the first day, and “12 Years A Slave,” “Captain Phillips” and “Philomena” the next. I’d get away with eating popcorn for dinner, and I’d frequent some of the city’s best independent theaters in the process without having to drop a small fortune on cab fare. I had my mission, I’d chosen to accept it, and I was practically skipping en route to the Brooklyn Academy of Music for that 4pm showing of “American Hustle.”

To say that I was moved, inspired, stimulated and humbled by the conclusion of the first night would be an understatement. The chemistry between its insatiably talented principals, all brilliantly orchestrated by David O. Russell, had me jonesing for a second viewing of “American Hustle.” The photography of “Nebraska” was worth fawning over, let alone the truly heartwrenching portrayals nailed by Bruce Dern and Will Forte. After watching Matthew McConaughey transform his body and soul into a tortured conduit for unhinged hope and despair in “Dallas Buyers Club,” I wiped my tears and on the soaked sleeve of my flannel, used the meat of my thumb to sweep under my lower lashes to make haste of any running mascara and I took a cab home, determined.

Where things took a turn for the impossible was somewhere in between “12 Years A Slave” and “Captain Phillips” the next day. “Watch the most intense movie of them all first on Sunday!” I thought. “Get the brutal stuff out of the way, so that you don’t have to sob hysterically until you’re heaving when you’re trying to fall asleep!” I reasoned. I was wrong. At Sunshine Cinema on Houston, I sat and plead for the plot gods to be kind as Chiwetel Ejiofor and Lupita Nyong’o survived insurmountable hardships. I gasped when Michael Fassbender transformed from Sassy Fassy into a calculating, bloodthirsty villain. I took too long of a moment to collect myself before heading over to watch “Captain Phillips” at a small screening room in the West Village after the lights had gone up, and wound up missing the previews, taking my seat in a completely empty theater as Tom Hanks was getting driven to the airport to begin his journey to Somalia. By the time I made it out of “Captain Phillips,” I was dazed, I was confused and I was dumbstruck by how bad Hanks’ New England accent was, but he was such a force in that movie that I didn’t care. I couldn’t make it to “Philomena” after that, as something about watching Dame Judy Dench quip some witty lines felt all too inappropriate after watching a growing man weep for his life and another watch as some were extinguished before him. I wasn’t just plowing through a movie marathon anymore. I was hurling myself headfirst into some of the most adventurous and risky films of the year, and I hadn’t thought the endeavor through.

I slept for twelve hours after giving up on the Oscar Blitz shy of just one movie, and that’s when it occurred to me that binging on the Best Picture nominees was both a brilliant and horribly naïve way to celebrate the superlatives of American cinema. These were the kind of movies that served as career touchstones, the sort that confirmed the meteoric trajectory of talented actors (Amy Adams, Jared Leto, Hanks) and redeemed the patient underdog in the background (Dern, McConaughey). This was a time period where the director/muse pairing was to be celebrated, between Martin Scorsese and Leonardo DiCaprio’s triumph over Jordan Belfort’s tale in “The Wolf of Wall Street,” Russell’s multifaceted look at Bradley Cooper’s range in “American Hustle” and the unrelenting, all-seeing eye of Steve McQueen that was expertly trained on Fassbender throughout “12 Years A Slave.” I was enamored with the brilliance I’d just taken in, if not overwhelmed by the depth and scope of the leaden arguments, binges and untimely deaths I’d just witnessed over the course of two days. By hanging on every perfectly placed word and savoring every meticulously composed shot, I had strained my eyes, ears and mind through overstimulation, thus bombarding my senses and subjecting myself to the raw whims of these phenomenal films in their candid glory. I had to let myself be overwhelmed by them to appreciate their strength, and I had to be bowled over by them in order to truly acknowledge their genius, subtle or barbaric though they may be. I had to overdose on the good stuff.

I don’t regret skipping “Philomena” too much, though it would’ve been something, successfully making it through seven full-length feature films in a single weekend. If there’s anything that Oscar Blitz taught me, it’s that 2013 was a year to be celebrated in film for the daring risks, subtle ploys and merciless truths they told in a world banking on instant gratification and fruitless interaction. As for my predictions, I’ve got my favorites and my best educated guesses as to who gets to take home the distinction for the Best Picture in a year full of veritable rivals, but I’m only sharing that insight (and my Junior Mints) with someone who’s bonkers enough to sit through all nine.

Golden Globe and Emmy nominee Benjamin Wallfisch is the composer responsible for the score of the hit movie IT. I talked to Ben about his approach to scoring the new version of this iconic story and his thoughts on film and music overall. Some very insightful commentary; listen in. END_OF_DOCUMENT_TOKEN_TO_BE_REPLACED

Rupert Gregson-Williams is an award-winning film composer. He just so happened to compose the score for this summer’s big blockbuster Wonder Woman. We talked about his beginnings in film scoring, film scores that move and inspire him and, of course, Wonder Woman. END_OF_DOCUMENT_TOKEN_TO_BE_REPLACED

Jeff Rapsis is a New England-based composer and performer. Lately, he’s been creating live musical scores for silent film screenings. I talked to him about his process and a few of his upcoming performances at The Capitol Theatre in Arlington and the Somerville Theatre. You can keep track of where else Jeff is scoring silent films here. END_OF_DOCUMENT_TOKEN_TO_BE_REPLACED

Planning on seeing Rogue One: A Star Wars Story when it opens this weekend? I joined Adam 12 to give you an idea of what to expect. But don’t worry, I didn’t give anything away. END_OF_DOCUMENT_TOKEN_TO_BE_REPLACED

No, not from afar, from the comfort of her couch. From the actual awards themselves. That’s where Meredith Goldstein was for the Oscars. She shared all the juicy, first-hand details with me. END_OF_DOCUMENT_TOKEN_TO_BE_REPLACED

To celebrate the opening of ‘The Force Awakens,’ I had some very special guests in studio to start the Thursday, December 17 edition of The Brink. Listen. END_OF_DOCUMENT_TOKEN_TO_BE_REPLACED

Watching the new Star Wars trailer a million times gave us all sorts of feels. And one of those feels was nostalgia. END_OF_DOCUMENT_TOKEN_TO_BE_REPLACED

END_OF_DOCUMENT_TOKEN_TO_BE_REPLACED

If you’ve finally finished crying over Inside Out — or Lava, the short that ran before it — Pixar is readying another assault on your tear ducts with The Good Dinosaur, if its newly released trailer is any indication. END_OF_DOCUMENT_TOKEN_TO_BE_REPLACED