What does the future hold for Red Sox, Celtics, and Patriots favorites? 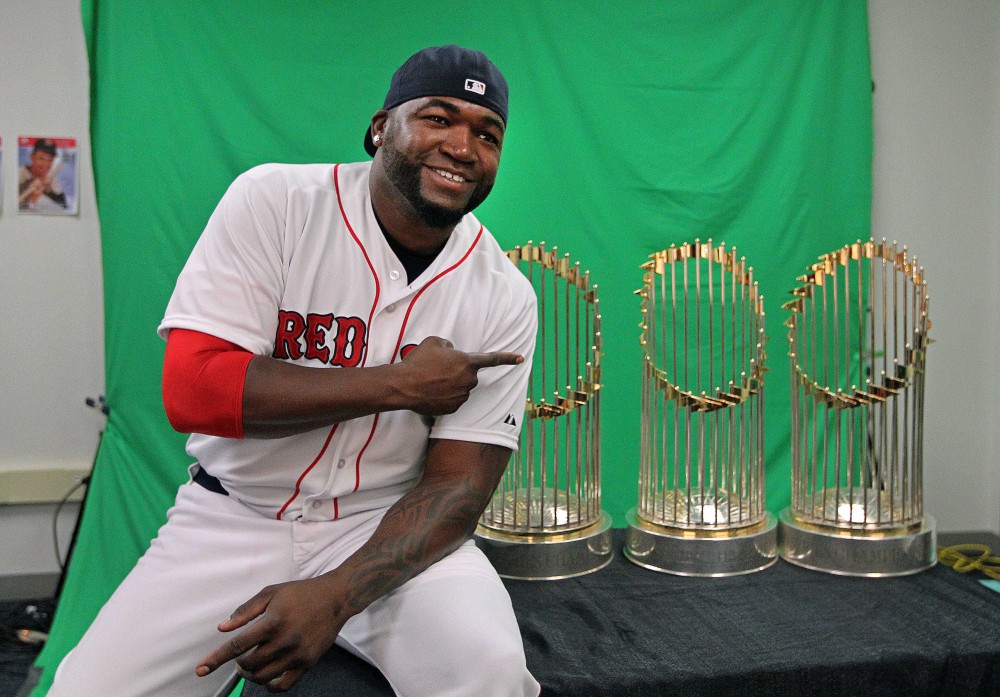 The idea of the hometown hero in sports often comes off as rather nebulous. Fans root for the laundry, it’s a business, anyone can be dealt or cut at any time, etc. But it still stings when our favorite, long standing players wind up elsewhere.

This is a worthwhile topic on the local landscape right now because there are a handful of big names, all of whom have been here for a good stretch while carrying varying degrees of cache with their respective fanbases, yet could be gone over the course of the next several months. Three of our four major pro teams currently face such potential scenarios, with one of them, the Celtics, still reeling from the departure of Paul Pierce (who, perhaps not coincidentally, will be in Boston to face his old team tonight), arguably this city’s biggest hometown hero to go elsewhere in the last 20 years.

It’s a tricky topic, knowing when to cut the cord. We’ll soon see how the Pats, Sox and Celtics handle the following stars.

Big Vince, the beloved, loyal face of the Patriots’ defense for the better part of the past 10 years, is 32 years old, weighs somewhere in the neighborhood of 325 pounds, missed most of last season with a ruptured Achilles, and counts $11.6 million against the team’s salary cap this upcoming season, the last of his deal. These factors have led to an ongoing discussion regarding whether the Pats should retain him via a contract extension/paycut, or simply let him go and use his cap money elsewhere. An argument against Wilfork, along with the age, weight and injury ones, is that in this day and age of the NFL, players like him – giant, space consuming, run stuffing, interior defensive lineman – are becoming an anachronism, as passing statistics trend skyward, making pass rushing linebackers and defensive ends as well as shutdown corners all the more important. But Wilfork is far more versatile than your typical mountain of a nose tackle. The Pats have shifted him around on the defensive line at times over the past three or four years because he’s capable of a lot more than just clogging up the middle. And although stopping the run isn’t as vital to winning as it once was, the Pats went from being very good at it before Wilfork was injured in Week 4 of last season, to very lousy at it afterward.

In addition to what Wilfork brings on the field, it must be noted that to an extent, he is to the defense what Tom Brady is to the offense in terms of both profile and leadership. There are intangibles that come with Wilfork that the Pats will be hard pressed to replace should they choose to part company with him. Instead of releasing him, the Pats should follow the blueprint employed by the Pittsburgh Steelers earlier this week with one of their longtime defensive stars in a similar salary cap situation, Troy Polamalu. Polamalu would have counted nearly $11 million against the Steelers cap in 2014 so instead of cutting him, Pittsburgh, a team with more severe cap issues than the Pats, simply extended his contract by three years, enabling them to spread out his cap hit over the length of the new deal. Now, he will cost only $6.5 million against the cap this year, which, according to my crappy math skills, is a savings of over $4 million.

The Pats can do something similar with Wilfork to free up extra money while allowing them to keep a franchise icon that isn’t yet ready to leave. It’s been reported that they are attempting to do just that. Let’s hope they do.

Lester’s 2013, which concluded with some of the best, toughest, most consistent postseason pitching seen in these parts in quite some time, cemented his ascension to the upper ranks of baseball’s aces. What greeted him when he arrived in Fort Myers for spring training a few weeks ago were a barrage of questions regarding his future with the Red Sox since his contract expires after this year.  Lester has routinely said that he loves Boston, he doesn’t like change, and he’s willing to take a “hometown discount” in order to stay with the only organization he’s ever known. What’s unclear at this point is his exact definition of a “hometown discount,” and whether it matches up with that of the Sox. Lester will be as coveted as any free agent hurler should he hit the market, lending a sense of urgency to getting him locked up before the end of the upcoming season. Still, given the Sox recent change of course insofar as doling out big money, long term contracts in the aftermath of the Carl Crawford/Adrian Gonzalez disasters, it’s safe to wonder how far they will go to keep him.

Baseball’s highest paid pitcher is the Dodgers’ Clayton Kershaw, a lefty like Lester who signed a seven-year deal worth a mind-boggling $30.7 million per year. Lester will not get that kind of money, nor does he seem to be looking for it, which is a good sign for the Sox. A more realistic baseline feels like the $24 million per year made by two Phillies’ lefties/playoff stalwarts, Cliff Lee and Cole Hamels, with the seven-year, $155 million contract the Yankees gave to Japanese phenom Masahiro Tanaka (who, while we’re here, has never pitched an inning in the U.S.) also factoring into negotiations.

Again, if the Sox are going to get any kind of bargain (and trust me, bargain is a very relative term in this context), they’d best get Lester re-signed now. His price will only go up the longer he remains unsigned for 2015 and beyond, especially if he comes anywhere near to approximating his performance from last season and the promise he showed before the collapse of 2011 and the nightmare of 2012. The Sox may have won a World Series via a more responsible fiscal model but the fact remains that great pitching, especially great, homegrown, left handed pitching , is very difficult to come by without paying a hefty a price. The Sox have a strong cadre of youngsters in the minors, some of whom may be ready to contribute as soon as this year. But guys like Lester don’t grow on trees and minor league talent, no matter how impressive, is anything but predictable. If the Sox are going to make a major financial splash with anyone at this point, Lester is the man.

Now that the trade deadline has passed and Rondo wasn’t dealt despite being made available for the 368th time in his eight years with the Celtics, we can look toward the summer, when he’ll be entering the final year of his contract and the rumors will begin to fly again.

The Celts were well served to keep Rondo, as has been noted before in this very space. When he’s healthy, he’s a top 20 player in the NBA, easily a top three point guard.  The idea that he will be the one distributing the ball to any big returns the Celts can get on their stockpile of assets is very appealing. Rondo would rather be the fulcrum of the offense than the focal point and we’ve seen what he’s capable of when there’s superior talent around him.

Of course, this being the Celtics, who weren’t afraid to dangle even Pierce in the occasional trade possibility, Rondo could be a goner at any time once the season ends. As much as various local loud voices will have you believe that he’s a detriment to the organization because he’s surly and defiant with the media and would rather say nothing than defuse a potential firestorm like the one he started by staying behind in LA for a birthday party instead of accompany his teammates to Sacramento a couple weeks ago (I believe I’ve been told at least 15 times since then by one of those loud voices in particular that Rondo “sucks as a person” while completely disregarding all the great work he does and accolades he’s received with local children and in the community), it’s really all just very hot, self-righteous air. Could Rondo be less prickly? Of course. Are many of his past issues, none of which are all that major in the grander scheme of things (never once has he been arrested or in any kind of trouble off the court), avoidable? Indeed.

But none of his antics amount to a legitimate reason to trade him. If the Celtics are blown away by an offer, like the Sixers were when they traded their point guard, Jrue Holiday, last summer (as documented here by Bill Simmons), perhaps shipping Rondo out would be the right move. Short of something to that effect happening, however, the Celts should remain fully invested in keeping him.

Big Papi and his annual contract commentary is a spring training tradition that at this point feels like it will go on forever, or at least until he retires. It’s a silly, overplayed narrative made larger than life every season due to the need to fill column inches and radio bandwidth during a very slow time on the sports calendar so I’ll be brief. Yes, the Red Sox will probably tack an extra year onto Ortiz’s contract. No, there is no urgency to do that because he’s signed for this year and isn’t exactly a robust market for designated hitters pushing 40, regardless of how great they are or even if they hot nearly .700 in the World Series. Ortiz is a marvel, one of the most productive, special Red Sox ever to wear the uniform and the Sox will probably keep adding those extra years, one season at a time, whether he performs or not. Ortiz is the face of the franchise and can likely stay as long as he pleases. There’s nothing to see here other than a veteran slugger trying to motivate himself.  It’s a tactic that’s worked pretty well for both him and the team in the past, so why complain about it? Just sit back and enjoy another 30 homers and more ridiculously clutch hitting.

END_OF_DOCUMENT_TOKEN_TO_BE_REPLACED

Eric Wilbur had quite the story to tell. END_OF_DOCUMENT_TOKEN_TO_BE_REPLACED

Winding down 2017 in sports. END_OF_DOCUMENT_TOKEN_TO_BE_REPLACED

Chad Finn has some thoughts. END_OF_DOCUMENT_TOKEN_TO_BE_REPLACED

The saddest onside kick ever? END_OF_DOCUMENT_TOKEN_TO_BE_REPLACED