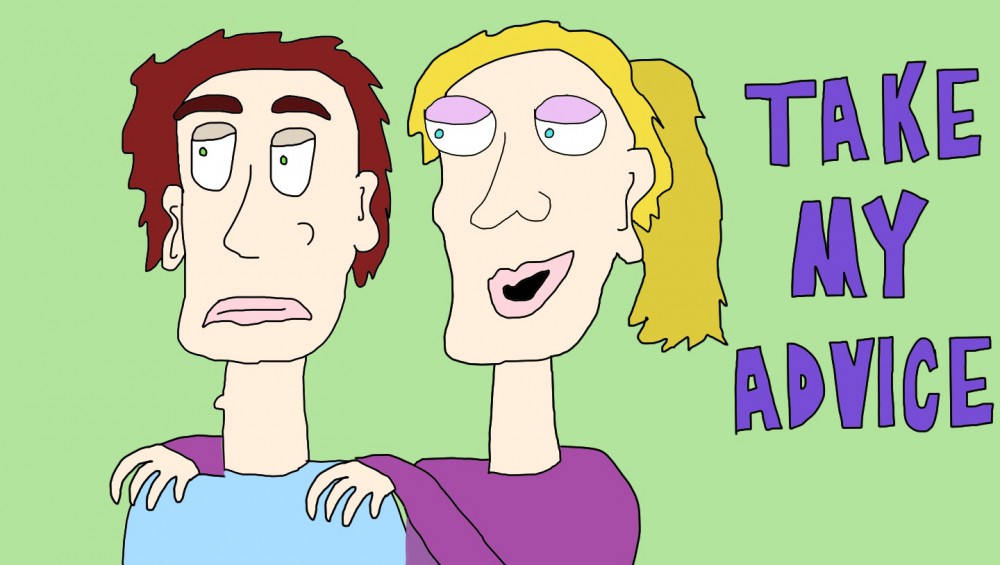 One of my coworkers is a super-close talker and a weird creeper. You’ll be sitting there, minding your own business, when suddenly she appears out of nowhere, whispering up in your ear. The other day, this happened, and I told her she had scared the everloving piss out of me (people have told her before that she creeps, but she just laughs it off), so she decided the best option would be to “reassure” me by putting her hand on my shoulder, which weirdly escalated into a mini neck-massage. The whole thing made me massively uncomfortable, but I didn’t really know how to deal with it—I just wanted her to leave. So what do I say now, if anything? She’s already so defensive about how often she sneaks up on people that I’m worried anything I say won’t register, anyway.

There’s only one way out of this. You have to go into the crevasse.

Next time you see this overly-friendly acquaintance, tell her again that you’d appreciate it if she gave you a little warning when she was coming up behind you (for palatability, blame yourself: “I just sometimes get so focused in on what I’m doing that I don’t realize someone is nearby, and it startles me”), and that, along the same lines, you generally need her to give you a larger amount of personal space.

Again, blame yourself: say you know it’s a little strange, but you have kind of a large “bubble” that you need from other people, otherwise you get stressed.

Then dive down into it: tell her “that includes other people touching me casually—it’s just something I’m not comfortable with.”

If she protests, or claims that she doesn’t do that, you can back off and let her know you’re just trying to be up front. But then, next time she DOES do it, you have to speak up right away and say “sorry, this is one of those ‘personal space’ moments for me,” preferably while physically stepping away from her.

Yes, this will make things briefly more awkward. But that’s the only way to get to the other side, where she isn’t constantly creeping, touching your shoulder, and generally making your life a series of “Jesus CHRIST how long have you BEEN there?” moments.

Hopefully after one or two interactions like this, she’ll get the message (bonus: she might stop coming around so much if SHE feels a little awkward, suddenly).

If she doesn’t, get in “touch” with HR, tell them you’ve tried to talk about it directly with your co-worker, and ask their advice on how to proceed. Yes, that’s as awkward as it gets…

…except, of course, for random, unsolicited neck massaging from a coworker.

Today, that briefly changed, as the hashtag #TheWorstPartofDepressionIs trended worldwide on Twitter, sparking a conversation on an issue many find difficult to discuss. END_OF_DOCUMENT_TOKEN_TO_BE_REPLACED

I’m in my mid-twenties, and I’ve been working as a substitute teacher for the last couple years (I joined Teach for America right out of college). I know some of the girls in classes I teach have crushes on me — high schoolers aren’t very subtle — but I brush it off, because I’m not an idiot. Last week, however, I got a disturbing email from a girl in the English class I subbed for. Pictures were attached. You get the gist. What do I do about this situation? I obviously haven’t responded, but I’m afraid she might go Lifetime-movie on me. END_OF_DOCUMENT_TOKEN_TO_BE_REPLACED

Ridiculous doesn’t even begin to capture all that transpired, from the storm of emojis to the storming and barricading of Jordan’s house by a cavalcade of Clippers. END_OF_DOCUMENT_TOKEN_TO_BE_REPLACED

My friend has a dog, and she’s always been kind of half-assed about caring for it. I’ll see her out at a party or a barbeque all day long, so I know the dog is home alone, and sometimes she goes out right after she finishes a shift (she’s a waitress, so that might be pretty late), without even going home to feed the dog or let it out. The other day, though, I went over to her house and realized things have crossed a line. There were piles of dog feces in a couple of corners, and the entryway rug was soaked in urine when we walked in. She laughed it off and called the dog naughty, then cleaned up the poop and basically ignored it. I’m worried about the puppy, and about my friend; what kind of person does that to an animal? Should I call animal control on her? END_OF_DOCUMENT_TOKEN_TO_BE_REPLACED

My friend drives drunk. A lot. And not just “one drink too many” drunk, more like “in obviously rough shape” drunk. It not only makes me scared for her, it makes me angry: She could hurt herself or someone else, and there’s really no excuse in the era of Uber. I’ve tried talking to her about it, but she brushes it off or claims she won’t do it again, but then does, anyway. I’ve been tempted to call the cops on her just to get her to stop doing this. How do I convince her it’s not worth it before something terrible happens?  END_OF_DOCUMENT_TOKEN_TO_BE_REPLACED

Earlier this month, we posted a story about Rob, a man falsely accused of being a sex offender. END_OF_DOCUMENT_TOKEN_TO_BE_REPLACED

It’s also one that the NFL’s report can’t properly answer. Nor can the New York Daily News, despite its screaming front pages. END_OF_DOCUMENT_TOKEN_TO_BE_REPLACED