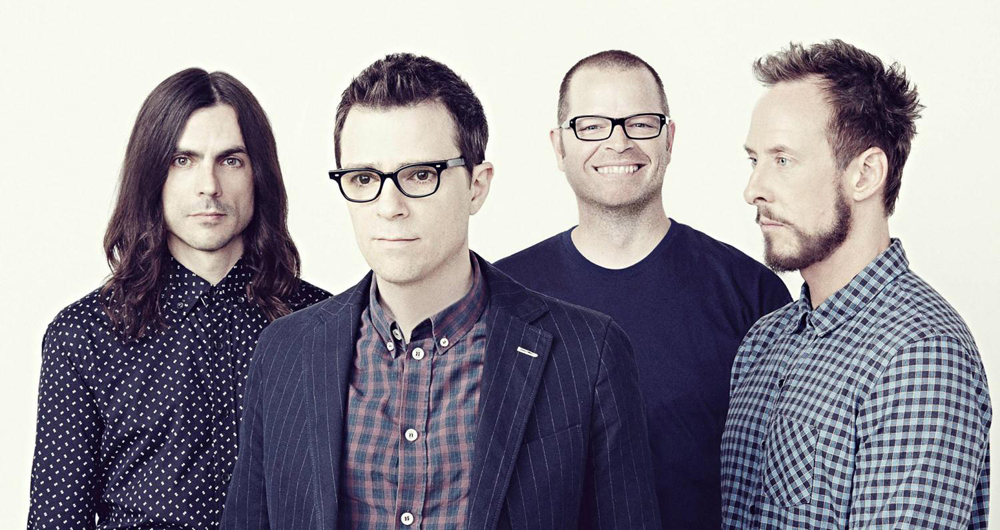 We’ve waited a while for a Weezer album that we can publicly be proud of again. Is this the week we find it? In short, yes, basically. But we’ll tell you exactly why, as well as thoughts on new albums from Flying Lotus, Bass Drum of Death, and a shockingly good new record from Foxygen.

An old adage goes, “The definition of insanity is doing the same thing over and over again, and expecting different results.” But for Weezer—a band in 1994 hailed by some critics as the potential saviors of the rock genre—doing the same thing over and over again can lead to radically different results. “Everything Will Be Alright in the End,” the Los Angeles rockers’ ninth studio album, revisits much of what made the group’s 1994 debut such a classic. But what was once an innovative sound mostly appeals to nostalgia at this point. It’s a flavor of irony unique to Weezer: these guys pushed rock music so abruptly in a new direction that soon enough, they were left behind. That said, this project does set itself apart from Weezer’s work over the past decade, with songs like “Back to the Shack” and “Cleopatra” connecting back to the aesthetic that made us love Weezer in the first place. Weezer’s just this sweet, fun band that, unfortunately, isn’t getting out of the industry’s friend zone anytime soon.

-John Wiley
Flying Lotus has always had jazzy inclinations, but he’s never immersed himself in the history of jazz as much as he does on his fifth studio album, “You’re Dead!” A sort of concept album about death (from the actual moment of death to grief to mortality to the afterlife), “You’re Dead!” is an odyssey, opening as a more traditional jazz album and launching into a restless multitude of styles. This time around, Flying Lotus is wearing all of his hats, working in jazz, hip-hop, gospel, funk, footwork, fusion, and prog-rock (he even raps on the album under his Captain Murphy persona). While there are standout moments (“Never Catch Me” and “Coronus, The Terminator” spring to mind), the album works better as a piece to be enjoyed from start to finish, and it only gets better with each listen. While an album built around the idea of death may sound dark and heavy, it is anything but. “You’re Dead!” is an album about death that’s brimming with life, handling a well-trodden subject with playfulness and a sense of humor.

-Tyler Cumella
People have been waiting for the opportunity to bash LA duo Foxygen for a while, following a year of diva-like antics and on-stage debauchery. “…And Star Power” will give haters such bait, but because of it, the record’s immense creativity will also go largely unnoticed. The record continues with the band’s love of ’70s Kinks riffs and hipped-out Greenwich Village grooves, but this time takes almost every opportunity to add noisy elements, crossing over from the palatable to the seemingly drugged out. The duo is in Ariel Pink territory now, which will hit a few pleasantly, and make the greater masses shake their heads, but there’s no denying that at points throughout the album, like in the odd but resonant pop chorus of “How Can You Really,” the Bolan-esque “Star Power III: What Are We Good For,” or the soft rock hook of “Coulda Been My Love,” the band locks into something nostalgically familiar and weirdly fascinating.

-Perry Eaton
Something about the unapologetic noise of lo-fi bands recording all of their instruments through one mic, and subsequently burying vocals under a cloak of fuzz, still remains one of the most luring musical qualities of the garage-bred bands that I frequently filter through my headphones. What’s even more enticing is a band that can crank out tracks in this musical vein that, rather than sounding like one long, fuzzy track broken up with moments of silence over 30 minutes, stands out amongst the reverb; like Bass Drum of Death’s 2013 self-titled album. Now, following the recent trend of lo-fi aficionados turning to more polished production (Ty Segll, White Fence), Bass Drum of Death has sharpened it’s sound, serving up that same live-fast-die-young-style of rock, but in an generic, overly produced way; one where the album fails to really differentiate itself.

Sounds like: A totally accessible rock song off the “Detroit Rock City” soundtrack.

-Alex Khatchadourian
18-year-old Bishop Nehru ostensibly seemed to have scored when he landed a collaboration with masked nerd-hop legend DOOM, but the opposite seems to be true on their eight-song LP. “NehruvianDOOM” opens with a signature sample mashup from DOOM, who incorporates a gratingly long bit of dialogue, one that might’ve charmed back in DOOM’s auteur period of 2004. In 2014, with a teenage prodigy under his wing, it’s filler. DOOM’s cartoonish production on the album is a throwback, but it’s more of a reproduction than authentic vintage. It’s raw but uninspired, and an anchored Bishop Nehru does little to buoy the record beyond an echoing couplet at the end of “Caskets.” Little about his presence in the duo doesn’t seem purposeful or much less mentored, leading to what is a skippable entry in the Villain’s catalog.

-Jerard Fagerberg
“Our Love,” the sixth studio album by Caribou (one of several stage names used by Dan Snaith), cements his curious place in dance music and electronica. The DJ-friendly album is a swirling cocktail of house, pop, psychedelia, and soul, with Snaith’s hushed, intimate vocals front and center. While the lyrics are simple and repetitive, they add to the overall ambiguity that is characteristic of the work as a whole. As standout single “Can’t Do Without You” demonstrates, even a sweet sentiment and declaration of undying love can appear obsessive and quietly menacing when endlessly repeated. Luckily, Caribou continuously toes the line, steeping the album in hypnotic mystery that is at once euphoric and melancholic, warm and nocturnal. “Our Love” is a masterful work of introspection and life-affirming love, quietly the greatest dance record of the year.

Sounds like: a quiet moment between lovers at the back of the club; a warmer take on Jamie xx’s brand of after-dark bass music