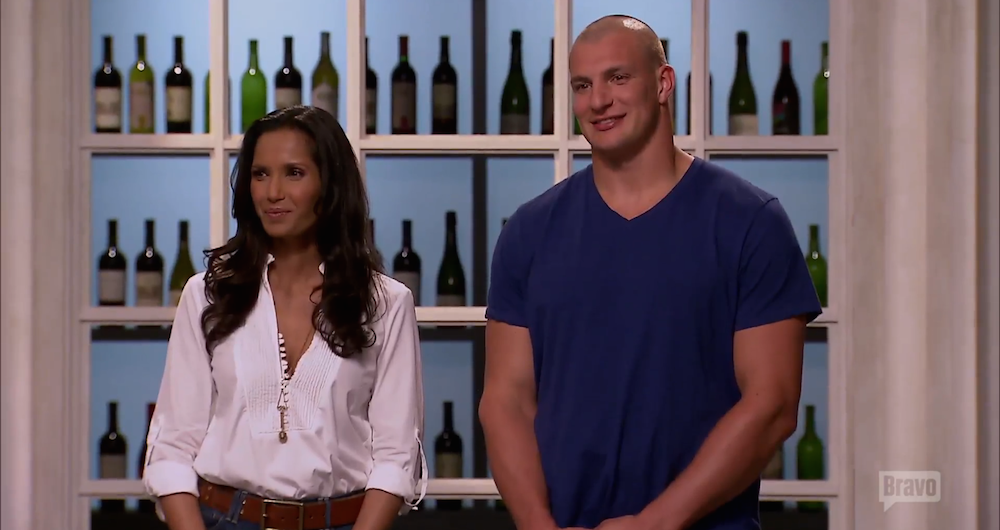 The 12th season of “Top Chef” has been filmed and themed around Boston, and tonight’s episode features Patriots tight end Rob Gronkowski. Whether he’ll have much to offer in nuanced food criticism is unclear, but he’ll have plenty of awkward sexual jokes about Polish sausage, if this preview clip is any indication.

Only one of the contestants has anything substantive to say about Gronk as a football player, while one chef’s only observation is that Gronk is “huge,” which he repeats several times.

The real highlight of the clip is Gronk’s burgeoning sexual chemistry with “Top Chef” host Padma Lakshmi, who insists Rob (as she refers to him) call her “honey.”

The chefs will have one hour in a Quickfire Challenge to make a sausage for Rob and Padma. Gronk proves his food critic chops with such insightful commentary as “I love food” and “I eat a big sausage,” to which Padma responds “me too!” amid scattered awkward laughter.

Considering Lakshmi was most recently married to Salman Rushdie, a man 23 years her senior, maybe she’d consider a man 19 years her junior. Sure there might be a bit of an intellectual gap between the man the author of “The Satanic Verses” and the speaker of “Yo Soy Fiesta,” but love (and sausage) conquers all.