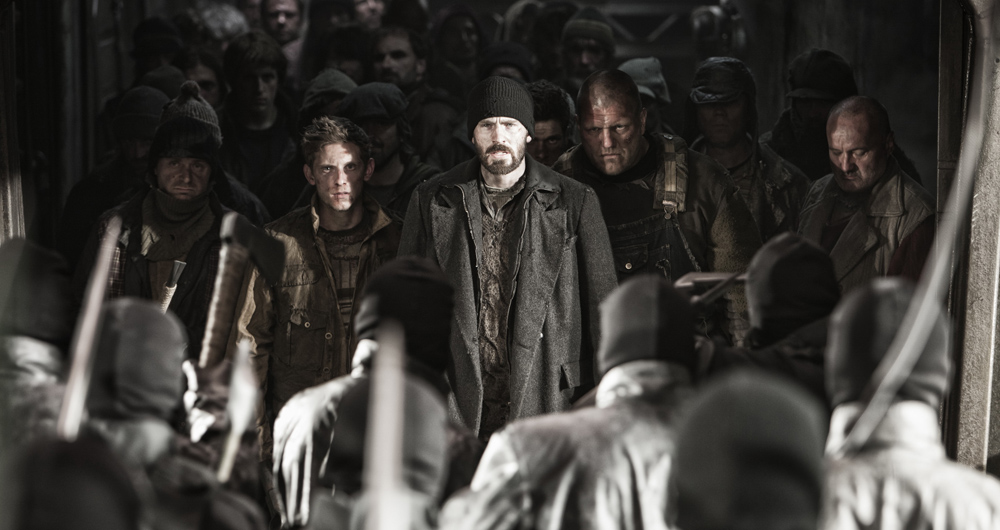 “Snowpiercer,” the English-language debut of South Korean filmmaker Bong Joon-ho, begins its limited U.S. run on Friday.  It’s playing one night at the Coolidge Corner Theatre (Saturday, July 5 at 11:59pm) and will be playing from July 4-13 at the Brattle Theatre.

Starring Chris Evans, Tilda Swinton, Song Kang-ho, Jamie Bell, John Hurt, Alison Pill, Octavia Spencer, and Ed Harris, “Snowpiercer” is a sci-fi action spectacle about the survivors of a failed global-warming experiment that causes an ice age that kills off most of the life on Earth.  The survivors live aboard the Snowpiercer, a massive train that endlessly travels on a globe-spanning track.  A class system is installed on the train; the wealthy and elite live in the front, and the poor live in the tail.  When a rebellion is ignited against the officials, led by Curtis (Chris Evans), the passengers of the rear charge forward.

The film has received rave reviews from critics, with many calling it the audacious, heady antidote to many of the mind-numbing, effects-driven blockbusters of summer (what, another “Transformers” movie is being released upon humanity this week?).  I’ve had my eye on this one for a while, so if you’re like me and want some more flicks to check out, or if you rather not fork over the cash for this one, here are five similar films that should grab your attention.

Frequently cited as Terry Gilliam’s masterpiece, “Brazil” offers a fantastical, comedic spin on George Orwell’s dystopian classic, “1984.” Originally ignored in the U.S. upon its initial release, it has since become a cult classic, influencing endless films with its offbeat brand of surrealism, lush, detailed production design, and satirical view of bureaucracy, class, and industry.
Speaking of Terry Gilliam, the French film “Delicatessen” is a deliberate homage to his work, which can be seen in its surrealism, sense of humor, and production design. Taking place in an apartment building in post-apocalyptic France, the film focuses on the building’s tenants, their relationships to one another, and their struggles for survival and control. With the arrival of a new tenant, chaos and disorder soon follow, featuring a deranged butcher/landlord and a vegetarian group of rebels.
The film that gained South Korean director Bong Joon-ho the attention he deserved, “The Host” is a riff on “Godzilla”-type monster movies, featuring many of the distinct stylistic and thematic choices that would reappear in his later work, including “Snowpiercer.” Joon-ho loves to work inside of certain genres, while pushing against their boundaries to create something that is wholly his own, with his idiosyncratic dark sense of humor, constantly shifting moods, and negative view of authority. While it doesn’t share any obvious plot similarities to “Snowpiercer,” “The Host” is indicative of where Joon-ho’s career was headed.
While Neill Blomkamp’s “Elysium” seems like the more obvious choice (with its focus on class divides), that film was a dud in its heavy-handedness. “District 9,” however, is a fine example of sci-fi allegory, inspired by the apartheid era in South Africa, swapping out aliens for humans. With ground-breaking special effects (made more astounding by the film’s small budget) and one of the most believable and sympathetic alien characters in cinematic history, “District 9” is both heady and thrilling, referred to as a sci-fi classic upon its release.
Bullet time. Mr. Anderson. The One. Whoa. Let’s be honest, if you haven’t seen “The Matrix” by now, chances are that you’ve been living in a pop culture barn. This cyberpunk, sci-fi classic has inspired countless films in a number of genres. And while the film has become the butt of many tiring spoofs and parodies, it still hasn’t lost any of its imagination, power, and downright badassery.