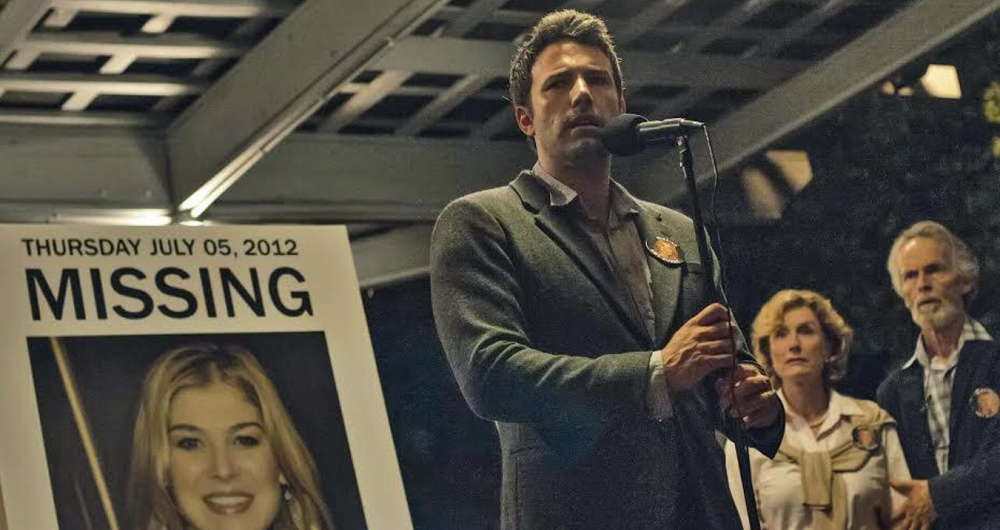 Awards season is now officially upon us, whether you like it or not.  Sure, it means that there is going to be a ton of the typical Oscar-bait crap, but there will also be a wealth of riches to stumble upon.  Case in point: David Fincher’s latest, “Gone Girl.”  Featuring an eclectic cast from stars Ben Affleck and Rosamund Pike to supporting players like Tyler Perry and Neil Patrick Harris, “Gone Girl” is based on Gillian Flynn’s huge best-seller of the same name (she also adapted the novel for the screen).  On the surface, it’s a he-said/she-said potboiler about a man whose wife goes missing on the day of their fifth wedding anniversary, but, as is the case, there’s a lot more going on beneath that.

Fincher’s last film, “The Girl with the Dragon Tattoo,” was also based on a literary hit, the type of thriller that you may find in an airport convenience store.  While that film felt like little more than a stylistic exercise, word has it that Fincher was able to delve deeper this time around.  “Gone Girl” currently has an 85% rating on Rotten Tomatoes, with critics calling it a dark, tonally jarring, visually stunning, and well-acted thriller about domestic entrapment and the underbelly of marriage.  Any film by David Fincher is a cinematic event, but with some critics placing it among his best work, you best believe that I’ll be dishing out the money to see this one.  If you’re like me and want some more great stuff to watch, or if you somehow haven’t been sold on it, here are five other films similar to “Gone Girl.”

The phrase that appears to come up the most when talking about “Gone Girl” is Hitchcockian, and Fincher himself has cited “Psycho” (among others) as an influence. While “Psycho” is one of my favorite films of all time (don’t get me started), I thought “Suspicion” would be more appropriate. A woman is swept off her feet by a man who is more than he appears to be. Oh, and he may be trying to murder her. A classic that poses the question: do we know the one we love?
Famously, director Georges Clouzot snatched the rights to the film’s screenplay before Hitchcock could get his hands on them. Instead, Hitchcock was inspired by “Les Diaboliques” in making “Psycho,” and we are left with this wonderfully dark and twisty French classic. Set at a boarding school, a woman plots to murder her husband with the help of his mistress. But when the body mysteriously disappears, things only get stranger. The film offers a perfect portrait of human darkness and cruelty and easily stands with Hitchcock’s best.
Domestic entrapment and marital betrayal play quite the heavy hand in “Rosemary’s Baby,” one of Polanski’s best and one of the greatest horror films of all time. When strange things start happening to soon-to-be-mother Rosemary (played an iconic Mia Farrow) after moving into a new apartment with her husband, a sense of alienation and suspicion overwhelms the film in the best of ways. Despairing and eerie, “Rosemary’s Baby” will leave you unsettled and may even make you question the whole notion of marriage and parenthood.
One of the most underrated films of the 1990s, Gus Van Sant’s deliciously dark comedy pokes fun at media obsession (as does “Gone Girl”) and the suspicions of marriage. Nicole Kidman stars as a comically warped version of one of Hitchcock’s famous blondes, menacing, seductive, and daffy. Is she overly ambitious or just plain evil? You’ll have to see for yourself.
Word has it that “Gone Girl” veers into certain levels of darkly comic trashiness, and what popped into my head but “Basic Instinct.” Largely panned upon its release, the film is still as ludicrous as ever, but is now recognized as something of a classic for the way it subverts and reconstructs the film noir. Plus, who can forget Sharon Stone’s sultry star-making turn and the leg-crossing seen around the world? Guilty pleasure of the highest order.