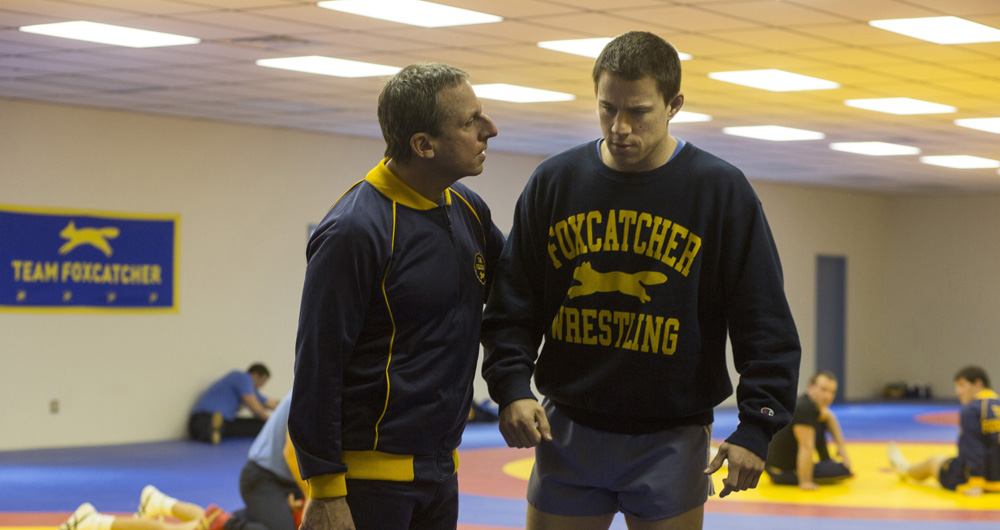 I know I’m repeating myself when I say, this week sees the release of another big awards contender. It’s just that time of the year, so you’re going to have to get used to it. Starring Steve Carell, Channing Tatum, and Mark Ruffalo, “Foxcatcher” is a true crime drama about Olympic Gold Medal-winning wrestlers/brothers Mark Schultz (Tatum) and Dave Schultz (Ruffalo) and John du Pont (Carell), an eccentric, paranoid schizophrenic millionaire heir and wrestling fan who invites them to move onto his estate to train for the 1988 Olympics. Through jealousy, obsession, and more, tensions soon come to a boil, and while the conclusion is well-documented fact, it may be best to leave it out for those of you who don’t know.

Director Bennett Miller’s filmography is strictly comprised of movies based on true stories, from “Capote” to “Moneyball,” so he has the experience. Both of those were nominated for several Academy Awards, including Best Picture, and word has it that “Foxcatcher” will follow the same path. The critical consensus for the film is largely positive, being called a gripping, chilling character study, with particular praise falling on the performances of the three leads. Some critics, however, complain that the film is overly dour and chilly and that the psychology, ideas, and drama are somewhat half-baked and undeveloped.

I’m divided on this one. While I love the actors and I’m keen to see their performances, I don’t know if I’m willing to throw money down to see what some are calling a piece of emotionally distant Oscar bait. If you’re like me and rather wait to catch it online but still want some cinematic goodies to watch, or if you have a burning passion to see this one ASAP, here are five true crime dramas to keep you satisfied.

A classic of 1970s American film, with Al Pacino in one of his best roles and featuring a stranger than fiction story about a man robbing a bank to get enough money for his wife’s sex reassignment surgery.
One of the greatest films of the 2000s, “Zodiac” seems to get better with each viewing. With the focus on the infamous Zodiac Killer of the 1960s and 1970s, the overall sense of dread, paranoia, and obsession is stifling.
“Boys Don’t Cry” follows the story of Brandon Teena, a trans man, who was beaten, raped, and murdered. Heartbreaking and hard to watch, it’s a film that practically demands to be seen.
Before Peter Jackson dived into the fantasy of “The Lord of the Rings,” he entered a different kind of fantasy. Based on the notorious 1954 Parker-Hulme case in New Zealand, “Heavenly Creatures” covers the obsessive relationship between two teenage girls who eventually murder the one’s mother.
What kickstarted the New Hollywood era, “Bonnie and Clyde” is stylish, groundbreaking, and iconic, telling the tale of two lovers/bank robbers with utter panache.