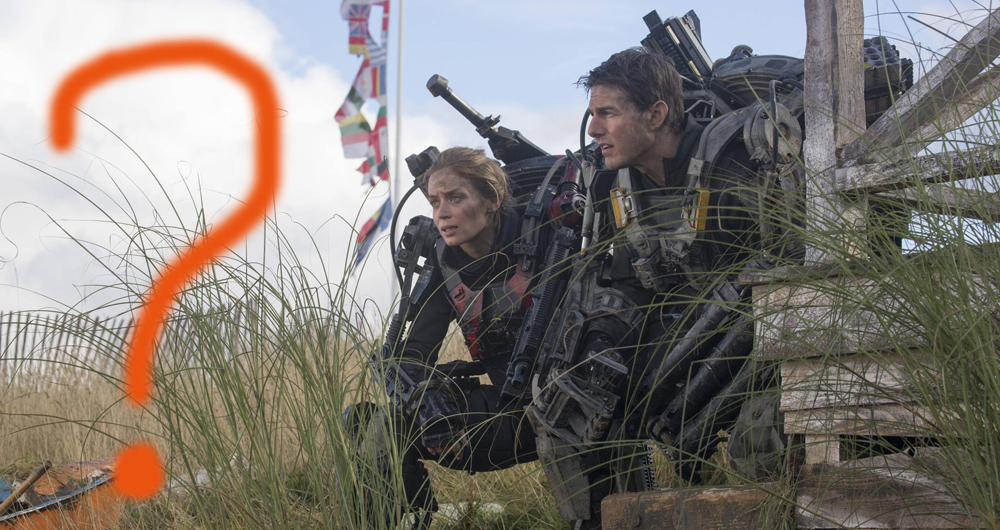 New to theaters this week is the futuristic military sci-fi film starring Tom Cruise, “Edge of Tomorrow.” Cruise plays an officer thrown into a time loop on the front lines of a war against alien creatures– forced to relive brutal combat and death over and over again, gaining greater insight and skill with each battle.

Excited about this one?  While I personally can’t seem to muster up a lot of enthusiasm for it (or the money for a ticket to go and see it), “Edge of Tomorrow,” to the surprise of some (me), has gotten a number of good reviews that have called it a smarter-than-average, funny, fast-paced, visually-stunning good time at the movies.  It currently has a 88% approval rating on Rotten Tomatoes, which isn’t everything, but has certainly got to be something.  Whether you have an itch to check this one out and want more like it or, like me, don’t want to bother but want some flicks to watch instead, here are five similar films that should catch your eye.

This one is the most obvious choice, but it must be said– it seems like whoever wrote “Edge of Tomorrow” ripped its high-concept premise straight out of “Groundhog Day’s” book. But aside from that similarity, I doubt there’s much else in common between the two. Bill Murray is perfect as a vain, self-centered weatherman who is forced to cover the annual Groundhog Day event in Punxsutawney, Pennsylvania with his cameraman and producer, but ends up reliving the same day over and over again. The film is hilarious from the start, and while it grows from there, what may surprise some is its moving exploration of what it means to live out a “perfect day” as Murray struggles to get it right. It’s one of the greatest comedies of all time and much more than its high-concept premise would have you believe.
From the director of the original “Robocop” (which may scare some off) comes a military sci-fi action film with more on its mind than just blowing things up. Taking place in the future, it explores the military through the eyes of a young soldier as he moves up in the ranks during a war between mankind and an insectoid alien species. “Starship Troopers’” focus on the military, however, is satirical, cutting, and ironic (which many have said of “Edge of Tomorrow”). While critics were divided about it upon its release, the film has become a cult hit, most likely due to its biting commentary on both the American military and society by playing with ideas of fascism through hyperbole, irony, costumes (certain aspects were modeled on the uniforms of the Nazis), and visual allusions to propaganda films. As the director, Paul Verhoeven, said, “War makes fascists of us all.”
Want to watch a futuristic sci-fi film that features Tom Cruise running around a lot, but don’t really want to see “Edge of Tomorrow”? Then you’ve come to the right place. All kidding aside, “Minority Report” is pretty great late-career work from Steven Spielberg, one of the godfathers of awesome, thought-provoking sci-fi blockbusters. Set in the year 2054, Cruise stars as the captain of a new police department called “PreCrime” that uses three psychics (called “precogs”) to arrest people based on crimes that they will commit. When Cruise’s character sees that the “precogs” have predicted that he will murder a man within 36 hours, he must get through a web of conspiracy in order to clear his name (plus, lots and lots of running). Spielberg’s vision of the future is fantastic and features plenty of sci-fi weirdness, but what most stands out, is the film’s success in fusing elements of sci-fi and film noir to examine questions of free will, fate, and human individuality. A movie with the high contrast, dark colors and shadows, murky morals, and “whodunit” story of film noir with all of the futuristic possibility, wonder, and strangeness of sci-fi.
Emily Blunt co-stars in “Edge of Tomorrow” as a badass war hero with two nicknames: “The Angel of Verdun” and “Full Metal Bitch.” “Looper,” like “Edge of Tomorrow,” also co-stars Emily Blunt, takes place in the future, and riffs on time travel, but in a much different way. It depicts the future as a place where time travel was invented but then made illegal, and used by criminal organizations that send people they want killed back in time where they are killed by assassins called “loopers.” Joseph Gordon-Levitt stars as a looper who is assigned to kill his older self, played by Bruce Willis. While the idea of Joseph Gordon-Levitt and Bruce Willis playing the same person can seem a little silly, once you get past it, you can feast your eyes on an original, smart, and somewhat melancholy sci-fi film that is concerned, overall, with character. Emily Blunt is great as a single mother who lives on a farm outside the city, and it’s a pretty damn bold move to shift the action of a sci-fi movie from your standard futuristic dystopia to a farmhouse in the middle of nowhere.
“Get away from her, you bitch!” So it goes. “Aliens” is a sci-fi action film that cuts out most of the high concepts and goes straight for the visceral punch. While “Alien” was a slow-burning and atmospheric horror film in the hands of Ridley Scott, “Aliens” is basically straight-up ass-kicking in the hands of James Cameron, who would go on to make another great sci-fi film (“Terminator 2: Judgment Day”) and another not-so-great one (looking at you, “Avatar”). Sigourney Weaver is fantastic as one of the ultimate female heroines in cinema history. If you’re looking for something that goes right for the gut, has some of the greatest creature design of all time, and features a scene of Weaver fighting an alien queen in an exosuit, then this one’s for you.