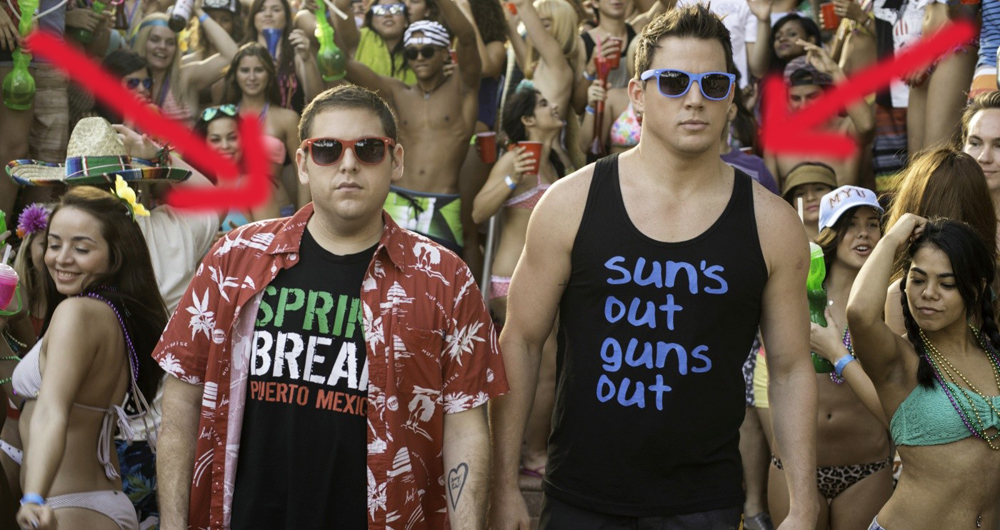 Coming to a theater near you this Friday is the meta, genre parody, buddy-cop comedy “22 Jump Street,” with Jonah Hill and Channing Tatum reprising their roles as officers (once again) going undercover as students much younger than their ages would have you believe (in case you didn’t know, Hill is 30 and Tatum is 34).  But this time, it looks like the kids are heading to college.

“21 Jump Street” was an unlikely critical and commercial success.  I don’t think anyone would’ve guessed that a movie revival of a fairly idiotic late-’80s Fox TV police procedural crime drama would be as self-referential, funny, or inventive as it was.  Plus, it brought us the inspired comedy duo of Jonah Hill and Channing Tatum.  And, even more unlikely, is the fact that critics are calling “22 Jump Street” the rare sequel that improves upon the original and one of the funniest movies of the year (so far).  If you’re like me and your interest is fairly piqued (and want some more flicks to watch), or if you don’t really want to fork over the ticket price for this one, here are five other similar cinematic goodies to check out.

Edgar Wright has become the king of intelligent, well-crafted, and all-around hilarious genre parodies, whether it’s the zombie movie in “Shaun of the Dead” or alien invasion sci-fi in “The World’s End.” “Hot Fuzz,” much like “22 Jump Street,” takes a shot at the buddy-cop action genre, and, like all great parodies, it also functions as an homage, showing a deep love and knowledge of the genre it’s tackling (at one point, the characters even watch “Point Break” and “Bad Boys II”). Simon Pegg stars as a dedicated, over-driven police officer who is transferred from his job in London for making all of his colleagues look bad. He ends up in a small, quiet village in the country and finds it hard to adjust to the setting. That is, until people start mysteriously dying throughout town, and he must team up with his partner (Nick Frost) to get to the bottom of it. Pegg and Frost are one of the greatest comedic duos of the 21st century, and “Hot Fuzz” plays them off of one another brilliantly, stressing the “buddy” in buddy-cop. Bitingly satirical and visually-inspired, it may be the greatest parody of the genre, and it will certainly be tough to top.
Shane Black was one of the hottest screenwriters of the ’80s and ’90s, writing such action hits as “Lethal Weapon” (coming up), “The Last Boy Scout,” and “Last Action Hero.” Black finally made his directorial debut in 2005 with “Kiss Kiss Bang Bang,” a tongue-in-cheek, post-modern riff on old hard-boiled crime fiction and buddy flicks. Robert Downey, Jr. stars as Harry Lockhart, a small-time burglar masquerading as an actor, Val Kilmer stars as the private eye hired to give Harry real “on-the-job” experience for his role, and Michelle Monaghan stars as a struggling actress from Harry’s past. The three get wrapped up in a twisty murder mystery that’s best left unspoiled. Downey and Kilmer make great comic foils, and their banter makes for some of the film’s greatest moments. But what truly sets the film apart is its utter self-awareness. For one thing, it’s a film that takes place in Hollywood (which is, in itself, a loaded setting), and for another, Downey is the lead, but also the narrator, and a “bad” one at that, breaking the fourth wall and doubling back to comment on previous action. All of the complex plotting and fast-paced dialogue of an old Hollywood B-picture with the self-consciousness of a post-modern exercise.
I said it was coming up, and here it is. Looking at “Lethal Weapon” now, it may come off as cliché or overdone, but that’s mostly because it helped kick off a wave of a very particular brand of buddy-cop action comedy: quick, cynical dialogue; mismatched partners; the “I’m getting too old for this shit” character; the “My wife just died, so now I’m a loose cannon” character; etc. Mel Gibson and Danny Glover star as the mismatched partners investigating The General, a drug dealer responsible for the death of the daughter of one of Glover’s old friends. Yes, it may seem a little tired now, but that’s only because it helped to redefine the action movie for the ’80s and ’90s, leading to a large number of cheap, crappy imitators in the process. “Lethal Weapon” is one of the godfathers of the buddy-cop action comedy genre and worth seeking out.
Hey, it’s Jonah Hill again! Here’s another movie that stars Hill about male camaraderie, but this one is far-removed from the action genre, offering more of a 21st century update on comedies like “American Graffiti,” “Animal House,” and “American Pie.” Hill stars with Michael Cera (while they were still lesser-known) as two friends reaching the end of high school and preparing to leave for college. They go on a quest to find alcohol to bring to a party where there is the hope that they will finally be able to lose their virginity. While that is the overarching plot, along the way, the film reveals a kind of sincere, honest look at male friendship, which is surprising, given the utter vulgarity and endless jokes that surround it. I’m pretty sure almost every single one of my friends has seen this (along with you and many of yours), but, just in case, it comes highly recommended.
Sure, the buddy comedy has been a thing since the dawn of cinema, but the phrase “bromance” is of a more modern idiom. And “I Love You, Man,” despite its flaws, certainly helped to advance it. Paul Rudd stars as Peter, a man without any male friends, so, following his engagement to Zooey (Rashida Jones), he goes on a search. The movie truly puts the “romance” in “bromance,” as Rudd goes on a series of “dates” to find the right friend, but none of them seem right. That is, until he meets Sydney (Jason Segel), and they become quick friends. While I have only seen “I Love You, Man” once and was not a huge fan, I know many that love it, and it could be the perfect movie for a “date night” with you and your buddies.