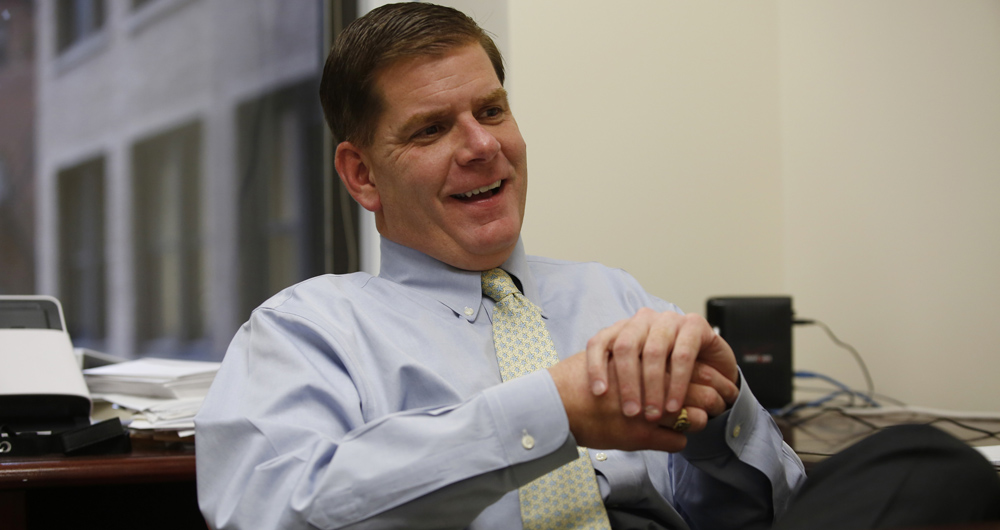 Now that that’s out of the way, we can delve a little deeper into what the new mayor had to say during an Ask Me Anything (AMA) session he hosted Thursday on Reddit, specifically his response to a question regarding his concerns over medical marijuana dispensaries sprouting up in the Hub.

Asked to elaborate on his overall stance on medicinal bud, Walsh said he supports the law and “the will of the voters,” which have vocalized support of dispensaries in the Bay State. It served as a fittingly progressive take on the issue, but as has been well documented of late, his position isn’t so cut and dry (weed puns, you see). With his comment, Walsh did assuage some of the hysteria inspired by his previous claims that he is “dead set” in preventing the availability of legal weed, medicinal or otherwise, in Boston. But in backtracking, Walsh has now sent two different messages, which left Redditors dazed and confused (I did it again, you see).

He added: “My concern is the applications – there was incorrect information on some of the applications and I simply want to make sure that everything is in order. I know that this is the law and that medical marijuana will eventually come to Boston.”

Not that it matters even remotely, but this comment drew -29 points, a figure indicative of a whole buttload of downvotes (which are usually reserved for nefarious posts and comments absent boobs or cats on the social media site) versus a much smaller number of upvotes (typically awarded to heroic posts inclusive of boobs or cats). The reason the comment inspired such derision, of course, is because it directly contradicts what he was quoted in the Boston Globe as saying just two weeks prior: “I fought them my entire career up on Beacon Hill, and I will fight them as mayor of the city of Boston.’’

Redditors, ever the gumshoes, pointed out the opposing statements, though Walsh had moved on to other topics by then (Legal Seafood makes his favorite chowder, for instance).

It should be noted that, in that Globe story, the one in which his own quotes have been levied against him, Walsh did emphasize his concern over the application process, so what he said during his AMA was hardly apropos of nothing.

“I am writing to express my serious concern regarding the two registered marijuana dispensary applicants in the city of Boston,’’ he wrote to John Polanowicz, the state’s secretary of health and human services, according to the Globe. “If any information provided in either application is confirmed to be inaccurate, I ask that the Department of Public Health immediately eliminate that application from being eligible for a final certification of registration.’

Still, the issue has been a divisive one in the city and, as such, Walsh shouldn’t fence sit, but rather decide on which side, for better or worse, the grass looks greener (One more time, you see!).

Enter to win a pair of tickets to attend The Hess Collection Seminar and Dinner as part of Boston Wine Festival 2018 at the Boston Harbor Hotel on Wednesday, March 14th. END_OF_DOCUMENT_TOKEN_TO_BE_REPLACED

Boston band Funeral Advantage is Tyler Kershaw. And Tyler Kershaw had a fun childhood, so it seems. END_OF_DOCUMENT_TOKEN_TO_BE_REPLACED

Perry put me on to daephne and the album blew my mind. END_OF_DOCUMENT_TOKEN_TO_BE_REPLACED

While many have called out Davis since a video of her refusing to issue a marriage license to Rowan County residents David Moore and David Ermold went viral in July, relationship columnist and gay activist Dan Savage went a step further on MSNBC Tuesday night, saying that “this is about someone hypocritcally looking to cash in”. He added: “And she is a hypocrite.” END_OF_DOCUMENT_TOKEN_TO_BE_REPLACED