Waiting for a Skate Park has Been its Own Era in Boston, Could That Era Finally be Ending? 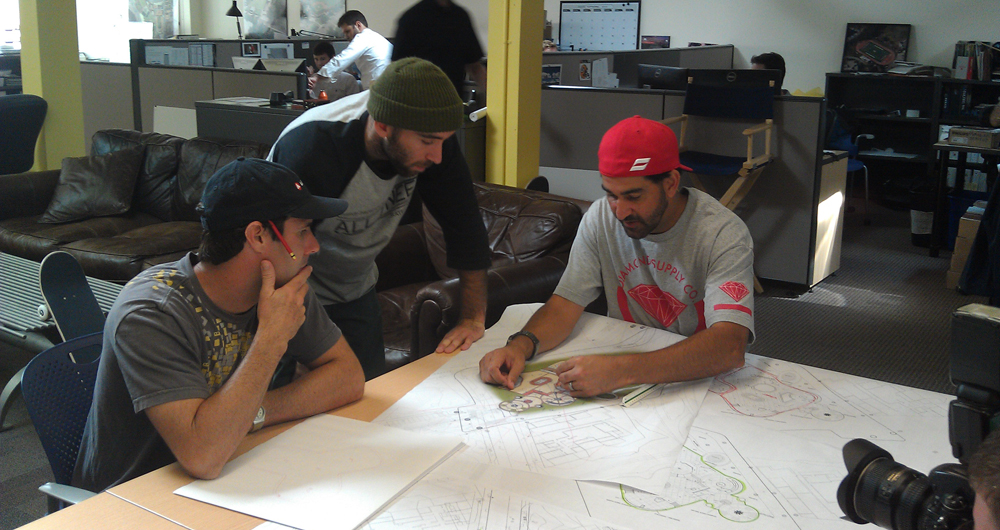 The effort to build a skate park under the Zakim Bridge has long been caked in toxic soil, twisted in bureaucracy, and snagged by miscommunication. The Charles River Conservancy (CRC), the Cambridge non-profit that spearheaded the project more than 10 years ago, exceeded its initial goal of raising $1.1 million for the park in 2006. Yet as of today, eight years later, the designated spot remains a brown field.

Because of that, I was more than a little skeptical that any progress would be made on the project when it came out in July that Vans, the California skate shoe brand, gifted an additional $1.4 million to the CRC to get things moving. The organization already had more money than it said it needed; what the hell is a million and a half more?

Then, on Thursday, the CRC posted to its website that an official groundbreaking was scheduled for October 23 at 9 a.m., rain or shine. I reached out to Renata von Tscharner, founder of the CRC, to confirm that I wasn’t hallucinating.

While I’m fully expecting an asteroid to wipe out Boston before anyone actually puts shovel to dirt on this project, it does seem that finally, after all these years, after all this money from grants and public donations has sat dormant for so long, that the city is about to receive its very own state of the art skate park.

I’m still entrenched firmly in Camp I’ll-Believe-It-When-I-See-It, but nevertheless, now seems like a good time to put into perspective just how long it has taken to get this thing rolling because the wait has truly proven to be an era of its own.

Consider that for roughly half of Mayor Tom Menino’s 21-year term in office, this project was in planning. That might be more of a testament to the Mumbles epoch than anything else, but it’s wild to think that for half of the tenure of the longest serving mayor this city has ever seen, the effort to build a skate park in the Hub never appeared, on the surface anyway, to be anything other than utterly stagnant.

The Patriots, Bruins, Celtics, and Red Sox all won a combined six titles in the time that has passed between the park’s initial announcement and its now imminent groundbreaking.

Whitey Bulger, on the lam for years before the project was even announced, evaded the feds for eight years before his 2011 capture in Santa Monica, Calif. Not only that, Boston’s most infamous gangster was tried and convicted for a litany of crimes in the subsequent years before we got this close to having a skate park.

Seriously, if someone asked you in 2004 what would happen first – Boston gets a skate park or Boston gets closure to the Whitey Bulger saga – what would you have said? A skate park, no doubt.

Yet here we are, a little more than a week away from construction. We can finally take seriously the sign at the site that reads, “Shred Ahead,” which until now has been an empty promise.

But I suppose a lot can happen between now and October 23.

Enter to win a pair of tickets to attend The Hess Collection Seminar and Dinner as part of Boston Wine Festival 2018 at the Boston Harbor Hotel on Wednesday, March 14th. END_OF_DOCUMENT_TOKEN_TO_BE_REPLACED

Boston band Funeral Advantage is Tyler Kershaw. And Tyler Kershaw had a fun childhood, so it seems. END_OF_DOCUMENT_TOKEN_TO_BE_REPLACED

Perry put me on to daephne and the album blew my mind. END_OF_DOCUMENT_TOKEN_TO_BE_REPLACED

END_OF_DOCUMENT_TOKEN_TO_BE_REPLACED

I’m in my mid-twenties, and I’ve been working as a substitute teacher for the last couple years (I joined Teach for America right out of college). I know some of the girls in classes I teach have crushes on me — high schoolers aren’t very subtle — but I brush it off, because I’m not an idiot. Last week, however, I got a disturbing email from a girl in the English class I subbed for. Pictures were attached. You get the gist. What do I do about this situation? I obviously haven’t responded, but I’m afraid she might go Lifetime-movie on me. END_OF_DOCUMENT_TOKEN_TO_BE_REPLACED