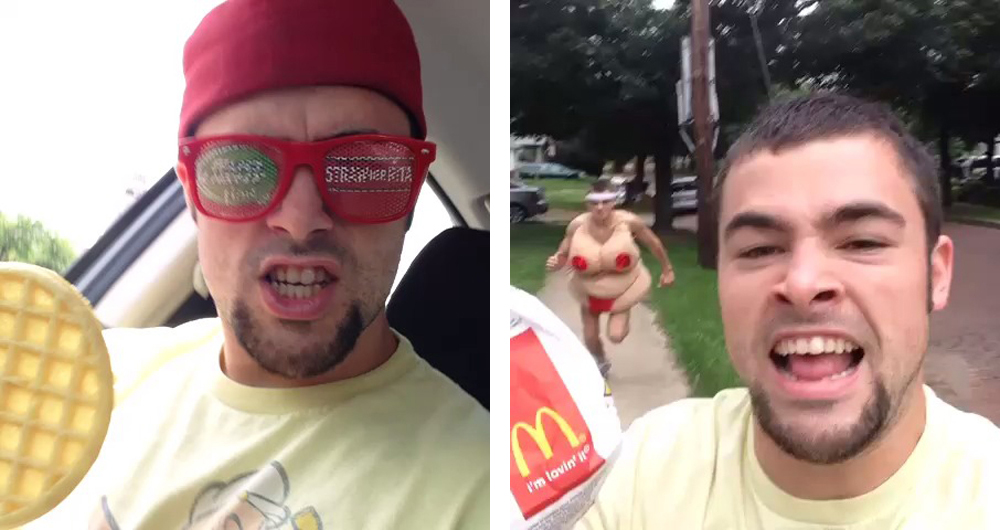 In his bio Keith Allen Vanke confesses to his 1.2 million followers that “I JUST WANNA LEARN HOW TO BE FUNNY.” Vanke has embarked on this journey by following a simple, yet possibly genius format. Essentially, all Vanke does is come up with a couple, or at times just a single line, to introduce a video clip of someone else doing something funny in a youtube or other sharing site.

Typically this clip involves someone crashing, getting hit with, or falling off of something. His unique one liners that preface the pain are what makes his vines so funny, but there is a sense of guilt that accompanies enjoying strangers’ suffering. And if no one ends up bruised or bleeding, Vanke utilises these video clips to make a sexual innuendo. Again, you start to feel guilty once you realize what the joke is implying, in most cases because his visual punchlines seem a little too crude to be intentional.

An example of a classic Vanke vine is represented in a recent post “My friend Michael Burrows does anything you tell him to,” in which Vanke cheerfully tells an out of shot figure, “you got this-just go!” A mere second later and we see a clip of the alleged Burrows attempting to hurdle over some velvet ropes. As you can imagine, it doesn’t end well. Vanke, however, is kind enough to award the failure a solid 10/10.

An important facet of Vanke’s work is that when it comes to mockery, NO ONE is off limits. In his vine “these kids just don’t wanna listen anymore,” the scene opens with Vanke warning an out of shot figure that he “better not go down there without me helping you.” Only a second later we learn that was addressing a toddler who falls off the playground and lands with an audible plop in the sand. It’s easy to watch this vine like ten times in a row but are we allowed to laugh at virtual babies falling to the ground?

Between the violence and sexual content, however, you can still find a genuinely feel-good vine on Vanke’s account if you sift around a bit. Most of his recent videos involve people hitting or getting hit by cars, other people, or various inanimate objects, but a look into Vanke’s activity on Vine over the summer shows us a different side of Vanke’s sense of humor. Granted, the adorable cats in this video end up fighting each other, but for a minute there, they are adorable.

A decade of Wreck The Halls. END_OF_DOCUMENT_TOKEN_TO_BE_REPLACED

Leah Wellbaum from Slothrust brought her trusty six-string to Studio B and turned in the first RadioBDC Session of 2017. Check out her three songs and her chat with Julie Kramer, recorded live on February 28, 2017. END_OF_DOCUMENT_TOKEN_TO_BE_REPLACED

Comedian Myq Kaplan is a comedian named Myq Kaplan. He joined me in studio this afternoon, and he’s at Laugh Boston this weekend. Click here for tickets. END_OF_DOCUMENT_TOKEN_TO_BE_REPLACED

Mike McColgan and Lenny Lashley of Street Dogs were in session on November 30, 2016 to play three songs and chat about their annual Wreck The Halls shows at Brighton Music Hall December 15-18. END_OF_DOCUMENT_TOKEN_TO_BE_REPLACED

Tegan and Sara stopped by for a chat before their House of Blues show on Halloween night. END_OF_DOCUMENT_TOKEN_TO_BE_REPLACED

My goodness, I love Sue Costello. It was great having her back in studio today to talk about her one-woman show, #IAmSueCostello, playing tonight at the Revere Hotel. Click here for tickets. END_OF_DOCUMENT_TOKEN_TO_BE_REPLACED