Verizon Drops The Weather Channel Because Everyone Uses Computers Now 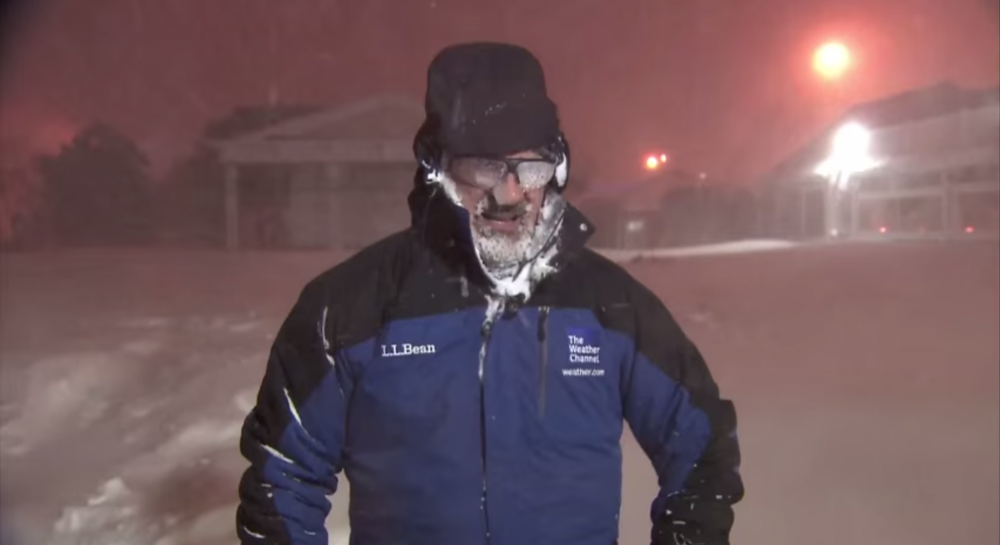 Whether you like them for their top-notch meteorologists or Jim Cantore’s exuberant thunder snow celebrations, The Weather Channel has carved out a niche in America as the station of record for everything weather. But people who rely on Verizon for their cable won’t be getting the channel any longer, according to an email sent to customers this morning.

In an email to subscribers, Verizon said that customers have trended toward using mobile apps and online sources for their weather coverage. 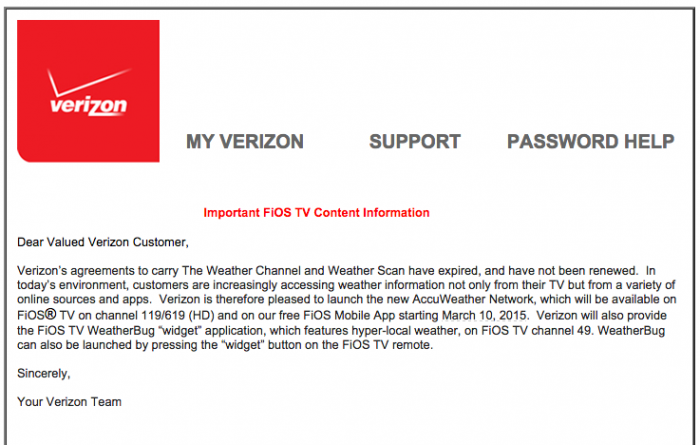 Verizon’s agreements to carry The Weather Channel and Weather Scan have expired, and have not been renewed. In today’s environment, customers are increasingly accessing weather information not only from their TV but from a variety of online sources and apps. Verizon is therefore pleased to launch the new AccuWeather Network, which will be available on FiOS® TV on channel 119/619 (HD) and on our free FiOS Mobile App starting March 10, 2015. Verizon will also provide the FiOS TV WeatherBug “widget” application, which features hyper-local weather, on FiOS TV channel 49. WeatherBug can also be launched by pressing the “widget” button on the FiOS TV remote.

Email from @VerizonFiOS says they’re dropping @weatherchannel … if only they’d drop the 100s of channels I never watch and lower my bill.

FIOS got rid of The Weather Channel and replaced it with a widget. It’s like replacing NBATV with Clown Basketball Network #thanks Verizon

@VerizonFiOS @VerizonSupport How dare you get rid of @weatherchannel !!!! Accuweather is garbage! GIVE US BACK THE WEATHER CHANNEL!

@VerizonFiOS hey @Verizon work your issues out with @weatherchannel or lose me as a customer. Simple as that. cc:@daveclark

And though he’s hardly an unbiased source, Cantore wasn’t a fan of the move either.

Although Verizon’s move could be seen as a negotiating tactic, similar to what DirecTV went through with the channel last year, but a Verizon rep told Syracuse.com that the company “is going in a different direction.”

Verizon does have a point about a plethora of weather sources being available, I’ll admit that when the first major storm hit Boston back in January, I turned on The Weather Channel for the first time in years. Much of the channel’s programming has been sensationalized — especially on Weather.com — and they play way too much reality programming for my taste. But when it comes to major weather events, The Weather Channel is still a trusted name.

Always a pleasure to have Boston.com’s Perry Eaton in studio for a chat. After we talked a bit about Pearl Jam at Fenway and Perry’s new podcast, he filled us in on Game of Thrones live and Narragansett’s new Bananagrams-themed brew. END_OF_DOCUMENT_TOKEN_TO_BE_REPLACED

No, not from afar, from the comfort of her couch. From the actual awards themselves. That’s where Meredith Goldstein was for the Oscars. She shared all the juicy, first-hand details with me. END_OF_DOCUMENT_TOKEN_TO_BE_REPLACED

It was wonderful having our good friend Meredith Goldstein back in studio this morning. She dug into the latest edition of Love Letters, which prompted us to play this song. And of course we had to discuss the Oscars. Make sure you’re following Meredith on Twitter, as she’ll be live-tweeting the awards this Sunday night. END_OF_DOCUMENT_TOKEN_TO_BE_REPLACED

Our first edition of TV Sets for 2016 might be better than every edition from 2015. END_OF_DOCUMENT_TOKEN_TO_BE_REPLACED