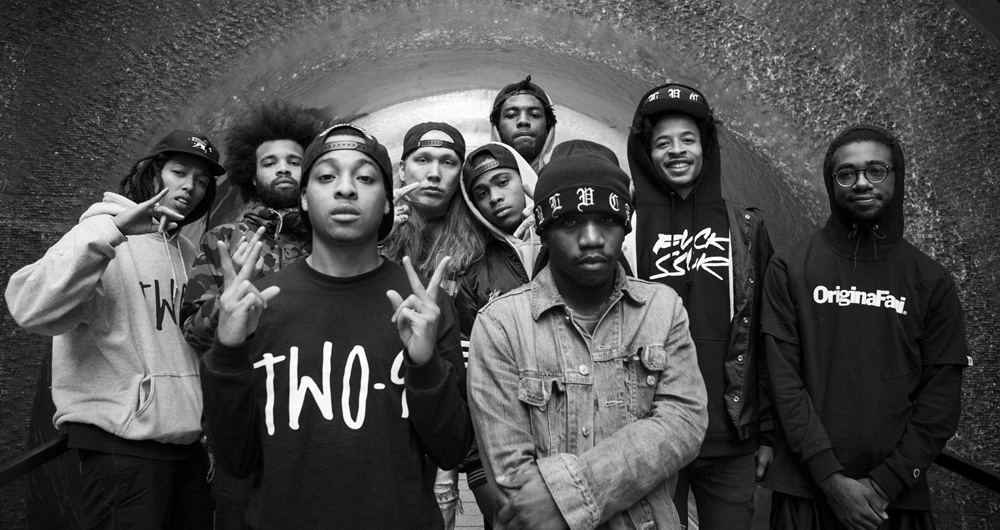 When I was a little kid, there was only one thing I wanted to do more than be a professional basketball player—and that was be a professional basketball player on a team made up of nothing but my friends. It’s what I was doing every winter season anyway, and it was a lot of fun, so I figured, why not keep going with it? I would spend hours in the driveway every day after school putting up jumpers, counting down an imaginary game clock and drawing up nonexistent plays that almost always ended with a championship-winning bucket. I didn’t know exactly how it was going to happen, but I could see the pot of gold at the end of the rainbow. My friends and I were going to stick together, keep practicing and eventually travel the country and play basketball together for the rest of our lives.

Long story short, we didn’t. The dream faded sometime before middle school—rightfully so—but every once a while in the years following I would still think to myself, “Damn, that would have been pretty cool.” It wasn’t so much the NBA aspect as it was the “NBA with my friends” aspect because, needless to say, everything’s more fun that way.

This weekend, a hip-hop collective out of Atlanta called Two-9 is flipping a similar dream into reality. Beginning with Philadelphia on Sunday and Boston on Monday, the group is embarking on its first ever national tour—the Cross Faded Tour—one that’s been a long time coming and built on a whole lot of hard work, but more importantly, deep-rooted friendship. Of course we’re talking about music, not sports, but the idea remains the same. When I spoke to Curtis Williams and Jace, two of the group’s six members that will be hitting the road with New York’s World’s Fair this month, there was genuine excitement in both of their voices—the type of excitement that only comes with the realization of a dream.

“I’m so fucking stoked, like I don’t even believe it’s happening,” said Jace, “These are my best friends and my brothers. It’s like summer camp. I’m just gonna be riding around with my fucking homies.”

“That’s exactly how I feel,” Curtis added. “I always wanted to go on a cool ass road trip with all of my best friends, and now I’m getting ready to do that same thing but actually through my career. It’s kinda like the perfect thing.”

Two-9 is in a good place right now, but the group’s success didn’t happen overnight. Officially formed in 2009 by Curtis and Key! (who has since left for solo pursuits), the group started off as any does—making waves locally and working internally to craft their sound and strategy while plotting on bigger moves. Though it took a few years and persistence in abundance, the moves did eventually get bigger.

Two-9—which is comprised of two sub-groups, Retro Sushi (Jace and Ceej) and FatKidsBrotha (Dave and Johnny) in addition to Curtis and DJ Osh Kosh—began to make noise beyond Atlanta, earning spots on festival bills like Trillectro and CMJ, and releasing increasingly high quality music with consistency. Curtis, in particular, caught the ear of Wiz Khalifa, and Taylor Gang has since taken the buzzing ATL collective under its wing, in a sense. Curtis appeared on Wiz’s latest mixtape, and according to Jace, a collaborative project between Two-9 and Taylor Gang is in the works.

I asked the two rappers to break down, as briefly as possible, how they got to where they are now. Aspiring rappers are a dime a dozen, and as hard as it is to “make it” as an emcee, succeeding as a group is in many ways even more difficult. As it turns out, there’s never been any real secret to Two-9’s success; they just never stopped working.

“You can’t stop. You just gotta keep doing it,” said Jace. “We didn’t necessarily do anything different from anyone else. We’re not the greatest rappers. I still know people personally that rap better than me, but we just kept at it.”

Curtis agreed, and added that focus plays an invaluable role.

“We all just started focusing on one thing,” he said, “Instead of trying to worry about all the stuff we could potentially worry about and be upset about shit we didn’t’ have, we were all just like, you know what, we want to make Two-9 happen. Let’s do what the fuck we can do. We can do this tour, we can perform a bunch of tight ass shows. It doesn’t matter what happens after or what we couldn’t do at the time, we can do this now, so why not?”

Neither Curtis nor Jace have ever been to Boston, but they’ve heard good things. Jace’s dad told him that it’s his favorite city besides New York, and Curtis noted that the whole gang is very much looking forward to hitting some bars. Whether or not you’re able to make it over to the Middle East to see Two-9 hit the stage on Monday night, there’s a decent chance you’ll run into them mobbing somewhere in the city afterwards. They move in a pack—as any group of close friend does—and they seem to be getting pretty comfortable with letting their presence be known. It’s hard to say they don’t deserve it to be.

Two-9 has experienced a few milestones over the course of their journey, but the 15-date Cross Faded Tour is their first official coming out party. And according to Curtis, everyone’s invited. “It’s gonna be a whole bunch of fun,” he said, “Even the points where we’re not performing the joints where you have to be moshing and doing all that shit, it’s gonna be sick. Osh is gonna have a little DJ set before our show. And with World’s Fair—it’s just gonna be a real dope hip-hop show. Even if you’re a new fan who had one of your friends talk you into coming to the show, you’re gonna have a good time.”

The way things are moving for Two-9, it’s safe to say that the next time they visit Boston, they’re going to be playing in a bigger one… and then an even bigger one after that. The intimate environment on Monday night will be electric, and if you believe in pursuing your wildest dreams with your best friends by your side, then it might even be a little inspirational too.

Enter to win tickets to see Trio Da Kali at The Villa Victoria Center of the Arts (Newton, MA) on April 10th. END_OF_DOCUMENT_TOKEN_TO_BE_REPLACED

END_OF_DOCUMENT_TOKEN_TO_BE_REPLACED

Enter to win tickets to Rhye at The Paradise on February 28th. END_OF_DOCUMENT_TOKEN_TO_BE_REPLACED

END_OF_DOCUMENT_TOKEN_TO_BE_REPLACED

Enter to win a pair of tickets to attend The Hess Collection Seminar and Dinner as part of Boston Wine Festival 2018 at the Boston Harbor Hotel on Wednesday, March 14th. END_OF_DOCUMENT_TOKEN_TO_BE_REPLACED

Her new album has been pushed back, but we have Kimbra’s new single for you. END_OF_DOCUMENT_TOKEN_TO_BE_REPLACED

The folk duo returns with a new record this week. END_OF_DOCUMENT_TOKEN_TO_BE_REPLACED

Now that we’re done looking back at 2017, let’s look ahead at 2018. END_OF_DOCUMENT_TOKEN_TO_BE_REPLACED