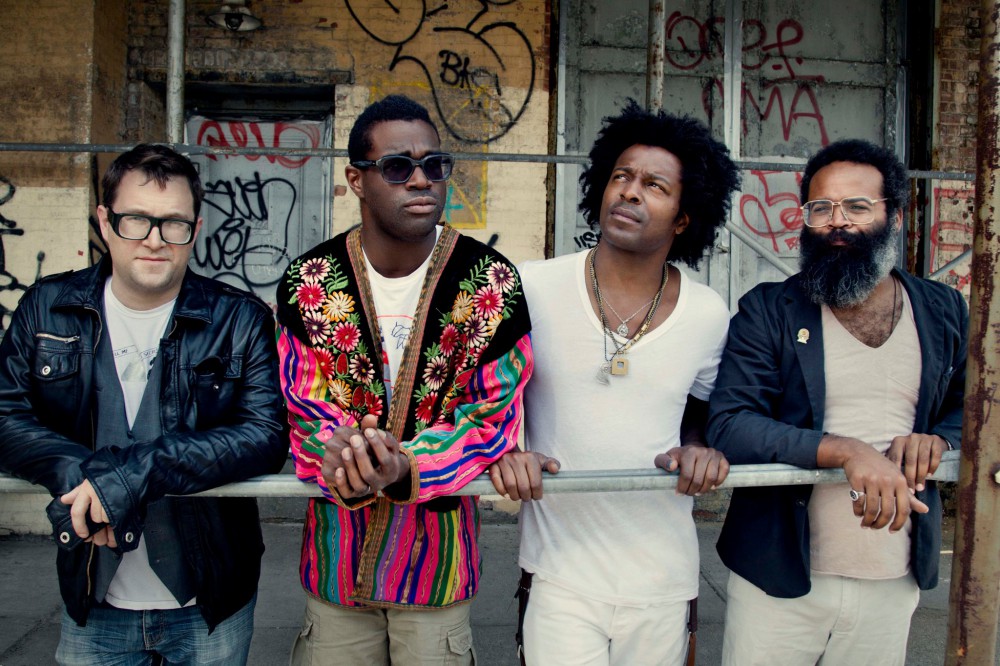 It’s a big week for new releases, and one of the last ones before blogs from sea to shining sea start to craft their coveted year-end lists. Surely, that was the thought process that went into each of these record releases.

If you happened to be walking along at night, listening to Andy Stott’s new album, and then suddenly bumped into a stranger, I think it’s safe to say that you wouldn’t be feeling so trusting. Which is all to say that the Manchester electronic producer’s latest, “Faith in Strangers,” is steeped in dark atmospherics, blooming with dread, foreboding, and sludge. Ever the techno chameleon, Stott takes the idea of industrial music and takes it to its logical extreme. It has the overall quality of watching the different stages of a factory in decay, with songs that are cavernous, menacing, pummeling, occasionally dance-able, and strangely beautiful. Any ethereal quality comes courtesy of vocalist Alison Skidmore (Stott’s former piano teacher), whose lovely voice adds a deeper vein of emotion to “Faith in Strangers,” even when its being chopped and screwed up. Under the umbrella of techno, Stott works with drum-and-bass, glitchy electronics, house, and more, to result in an album that captures an interesting juxtaposition of light and darkness.

Sounds like: cross a U.K. club on a Saturday night with the industrial wasteland of David Lynch’s “Eraserhead” and you’ll be getting pretty close

-Tyler Cumella
Wait, you thought Guerilla Toss was a punk band? On their new 4-song EP, “Smack the Brick,” the Boston quintet will have you know that there is far more to their sound than their raucous live swells might imply. This EP is funk, it’s progressive, and it’s an entirely different avenue of expression. The title track throws a healthy dollop of chunk bass into a swirling mix of time signatures, continuing into an anxiously static frenzy in “Be the Breeder,” while “Etqueeny” resolves in a violent samba, lost somewhere deep in Mariokartland. With a bit of a lineup tweak, the local weirdo collective continues to add new perspective to its curiously sonic mash. It explores from an almost entirely different angle than last fall’s “Gay Disco,” and is sure to make even the crustiest concertgoer pull off undulations that they never knew existed.

Sounds like: Bootsy Collins trapped in a static wormhole and smiling about it.

Is anyone else not at all surprised that Ty Segall managed to release a second album in 2014? The ultra-prolific garage rocker – he’s clocked up 16 solo LPs in six years, not to mention a ton of collaborative projects – couldn’t stick at just releasing the great double-length “Manipulator” this year (he probably didn’t want to break his multi-album-per-year streak), and he’s just treated us with a new collection, “$INGLE$ 2”. As its title implies, this compilation collects splits, 7″s and other non-LP tracks culled from albums “Goodbye Bread”, “Twins” and “Sleeper”, and oscillate between Segall’s de rigueur lackluster production and acoustic jangles that undoubtedly become recognizable sonic foreshadowings for more recent releases. Segall’s guitar-work, single-handedly defines Segall’s talent and shines on “Spider”, and the pop successes of “Falling Hair” and “Children of Paul”. Per usual, you’re aware of Segall’s many influences, but his tracks never lose credibility because of it. From his frantic rendition of Velvet Underground’s “Femme Fatale” to “For Those Who Weep”, volume gives way to tunes, massive ones at that: effervescent, and hook-laden with the simple thrill of chord-changes tolled on buzzsaw guitars.

-Alex Khatchadourian
West Coast weirdo Ariel Pink has always been a cup of tea best enjoyed by those who truly its unpredictable levels of caffeine. 2010’s “Before Today” was something of a tempered masterpiece, the strongest songs being meditative and tempered, while his follow up with Haunted Graffiti, “Mature Things,” was a cathartic mishmash of sensory overload. “pom pom” is a mix of both, and the product is about as beautiful as anything he has done. Pink is tethered to nothing on this record– no time signatures, laws of melody, verse structure or chorus– he uses the work as a whole as a stage for audible rebellion, and it translates as authentic for a clear majority of the time. Coy pop from lead track “Plastic Rainbows in the Pig Parade” goes through a massive transformation throughout the album, landing on the devastatingly admonitory “Picture Me Gone,” a ballad as pure as any that we give the nod to in this day and age. Ariel Pink doesn’t always make it easy to like him, but he certainly backs it up on record.

Sounds like: Captain Beefheart takes on the soundtrack to “Her”

-Perry Eaton
TV on the Radio have been through a lot in the three years since “Nine Types of Light,” most notably the death of longtime bassist Gerard Smith. “Seeds” is something of an elegy for the departed Smith, though the lyrics might not explicitly indicate it (save for maybe “Love Stained” or “Trouble”). In general, the songwriting leans on a motif of heartbreak to do the mourning. “Happy Idiot,” the albums danse macabre lead single, goofs on complacency and stagnation with the Brooklyn band’s signature skepticism, showing that the 10-year indie vets still play their old cards. That doesn’t mean TotR is without fault on “Seeds” – “Right Now” is a fairly shitty country cousin, and “Lazerarray” is as banal of a song as TotR has ever written. Still, though it certainly isn’t their most remarkable achievement, “Seeds” has tinges of exhalt that echo both their growth and their grieving (the happy trumpets on “Could You” and the beatific gang vocals on “Ride”). Perhaps the most resonant thing about “Seeds” is the sense of immediacy – the album drops out of the sky, beginning at a sprinter’s pace, only calming to pant a few duds, and showing that the indie originators can still keep pace, even if they’re not breaking the ribbon for a first place finish.

Sounds like: Busdriver’s indie rock band, Interpol figuring out what sunshine is