Tour Diary Pt. IV: Kissing the Coast, On the Road with Couples Counseling and Pariuh 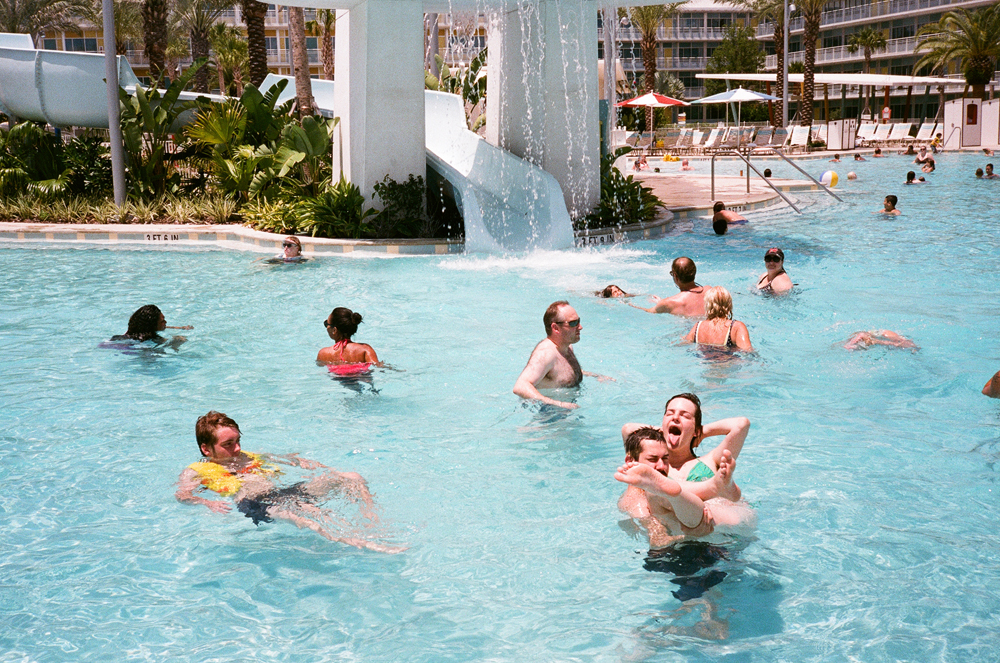 The beaches in Florida feel different than the ones up north. The water is warm and clear and so salty you feel like ceviche when you get out. It was about four in the afternoon when we got to St. Pete, and we took the brief time there was before the show that night to visit the nearest beach, Treasure Island.

I felt like a kid frolicking in the ocean, taking turns dunking Virginia and splashing Chris and Adam. The sun began to set. A drum circle of bathing suit-clad locals gathered, dancing and drinking. A belly dancer, an older woman with bronze leathery skin and dark eyes, shook her body to the rhythm, her gaze toward the sky.

Everyone rinsed off except Adam, who liked the feel of sand in his hair. On the way to the venue we picked up a couple bottles of Mad Dog, Chris’s special request. The Venture Compound was a fenced-in corner warehouse on a street of warehouses. There aren’t really basements in St. Pete, so most DIY shows take place at spots like the Venture Compound and art galleries. Jesse Vance was the mastermind behind the space.  He manned a massive soundboard, surrounded by vintage media that was either donated or found in the trash. He had two video cameras operating during the show–a vhs camera that recorded the set and a security camera on the boom mic stand that projected the image of the bands onto the back wall. There was a shrine of junky TVs in the corner. He had that look his eye of someone who could see beyond the walls of reality.

We met Patrick McBratney near the front gate. He was our type of dingle dongle. Patrick and his friends had their own version of YOLO called BOLO, which he explained as YOLO plus the motion of blowing imaginary fairy dust out of his hand. Virginia put glitter on my and Patrick’s eyes.

“You look like you’re a witch casting a spell.”

“The spell of social lubricant and magic. I’m drunk. I like it.”

Patrick brought out a cardboard box of tapes from his label Lava Church. The newly IRL friends traded tapes. Patrick’s first Lava Church tape was of his friend Jeff Busko’s project Sky Stadium from New Jersey, where Patrick grew up. He started putting out bands he found on the Internet and then Florida musicians. Jeff put Patrick in touch with some Florida artists who invited him to St. Pete Noise Fes where he was introduced to the local noise community. He started playing shows as Lovebrrd, a split between harsh noise and droney electronic loner pop reminiscent of Molly Nilsson and John Maus.

The show opened with a tag-team noise set of Patrick and Sara Smith, rattling my insides like pinball machine. At one point Sara blew up a balloon and expelled the air into the mic, inspiring the awe of the audience. Couples Counseling’s rhapsodies hugged the room, and Pariuh’s bombastic energy flooded the Compound. Lovebrrd closed out the night with a reverb soaked sad boys choir accompanied by a casio keyboard. There were maybe 10 people at the show, but it was one of the most fun nights of tour. Perhaps it was the Mad Dog, but I’d like to think it was the rad company and setting. At the end of the night, we all passed out on the communal tour air mattress on the floor of the Venture Compound in a woozy cuddle puddle.

The next day, after breakfast at the best worst place ever, Skyway Jack’s, where the waitress didn’t even recommend you order the cow brains, Patrick and Kanica, a total sweetheart who was also at the show last night, introduced us to a magical beach state park called Fort Desoto. There were hardly any people there. Palm trees littered the path leading to the shore. The white sand glistened, corrupted by the occasional clump of seaweed, and the ocean was a resplendent turquoise blue. The water was calm, cool but not cold. It started raining about a half hour into our swim. We took shelter under a covered picnic area. Virginia started breaking out in hives, which happens regularly for her. “My doctor says I have a strong mind-body connection and need to chill out.” The sky cleared up and we drove to another spot in the park. Adam and I investigated a lookout point closeby. We walked onto the platform and I imagined I was in the Galapagos. A group of dolphins popped their heads out of the water. A large pelican sat regally on a lampost, surveying the scene. A pair of stingrays floated beneath the ocean surface. Fishermen lined the dock. I was loathe to leave this beautiful place.

We parted ways with Patrick and Kanica. We would soon reunite with Lovebrrd in Tampa. Chris was eager to get to Orlando. We had a hotel–with a pool.

The hotel happened to be inside a retro-themed section of Universal Studios. Chris’s dad booked it for us as a gift. Adam and I stayed outside with the car while Chris and Virginia checked in. It was a good deal because two of us were passing as kids. 50s music played in the hallways. The color palette popped with fluorescent blues and greens. I felt like I was on the set of American Bandstand. It was all very funny and unreal. Apparently  that was what young families desired for vacation.

We arrived at The Space sometime after 9. Located next door to a pizza shop, it was a dumpster diver’s paradise. We walked up the stairs painted with the message “WELCOME. YOU ARE HERE. IT IS NOW.” to the second-floor apartment. The hallway, illuminated by colored holiday lights, led to an empty room with white walls where the bands would perform that night. Cody Zeigler, a spirited guy with a taste for bright shirts and suspenders, organized the show under the moniker Is It Over Yet? He’s been involved with The Space for a couple years now. He started out doing art shows and now books diverse lineups that attempt to connect touring bands and artists from different parts of the scene. Most of the venues in Orlando are bars. “I want this place to be a venue first.” His next project is repurposing vacant lots for one-month occupations that would include pop-up shows, art shows, bike shops and more. As more people arrived, it was clear The Space was a popular haunt.

The show kicked off at midnight with a smoky light show tech house DJ set, a distinct vibe from the next act, Adi Raja. The duo sounded like a world music radio station, with hints of tropicalia and ethiopian jams. Shredding guitar alternated with delicate vocals, embellished by electronic sounds and minimal percussion. Virginia started her set around two in the morning. A fashionable group of friends toted vintage cameras. There was a burst of flashes during the sets of Couples Counseling and Pariuh. The crowd was into it. We got to the hotel around 4 A.M. and stayed up talking and laptoping for a while. Chris and Adam were cruising OKCupid, inviting people to the last shows of tour. We put on a movie and eventually drifted off to sleep.

Most of the next day was spent seeing how long we could swim in the hotel pool before getting kicked out, sipping on overpriced piña coladas. We discovered a second pool in a different area of the hotel and waited in line with six-year-olds to go down its 50-foot water slide. Life was clutch. We left our small slice of manufactured paradise and went to a vegan restaurant called Dandelion I had visited when touring with the psych folk band Quilt two years ago. It was just as tasty as I remembered. Virginia and I indulged, thankful for something besides fried hotel food. Chris and Adam weren’t interested. Filled with veggies and the scent of chlorine on our skin, we proceeded to Tampa.

Part I: Baltimore and DC

Part III: The Sunshine State, on the Road with Couples Counseling and Pariuh

Enter to win tickets to see Trio Da Kali at The Villa Victoria Center of the Arts (Newton, MA) on April 10th. END_OF_DOCUMENT_TOKEN_TO_BE_REPLACED

END_OF_DOCUMENT_TOKEN_TO_BE_REPLACED

Enter to win tickets to Rhye at The Paradise on February 28th. END_OF_DOCUMENT_TOKEN_TO_BE_REPLACED

Her new album has been pushed back, but we have Kimbra’s new single for you. END_OF_DOCUMENT_TOKEN_TO_BE_REPLACED

The folk duo returns with a new record this week. END_OF_DOCUMENT_TOKEN_TO_BE_REPLACED

Now that we’re done looking back at 2017, let’s look ahead at 2018. END_OF_DOCUMENT_TOKEN_TO_BE_REPLACED

Our first Song of the Week for 2018. END_OF_DOCUMENT_TOKEN_TO_BE_REPLACED

In a year when so many things were off, the music was right on. END_OF_DOCUMENT_TOKEN_TO_BE_REPLACED