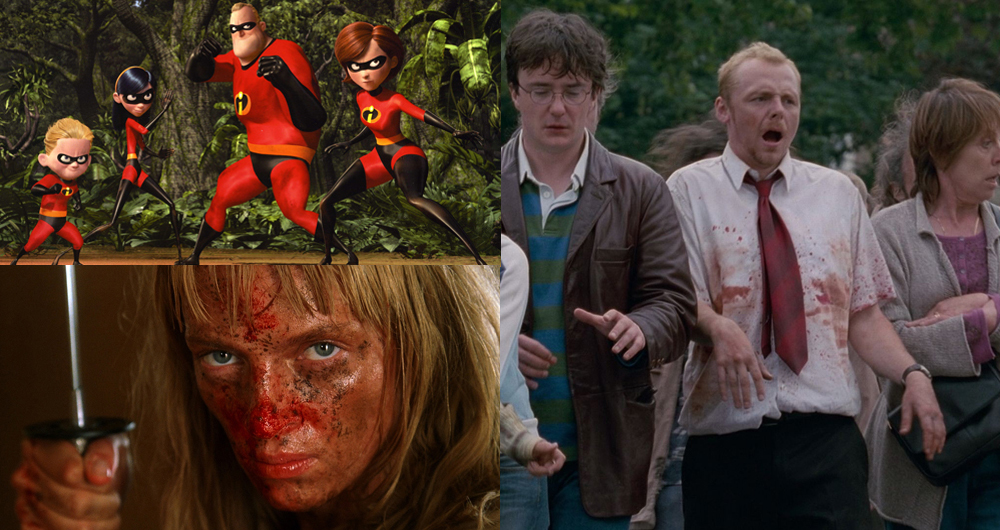 While all of the films previously mentioned were important to 2004’s year in film (regardless of whether they were “good” or “bad”), they weren’t quite the cream of the crop. That’s why I’ve compiled a top ten list of the “best” films of 2004 to guide you on your nostalgia trips. Last time, I covered the bottom five, and today, I’ll be diving into the top five. Interestingly enough, two of the top five turned out to be sequels, and the top three all deal with “romantic relationships” in one way or another. Yes, lists are all relative and subjective, but when the films are this great, it’s hard to object.

Look back on Part 1 of our countdown

While Edgar Wright had some credits to his name before “Shaun of the Dead” (such as the great British TV comedy “Spaced,” which also starred Simon Pegg and Nick Frost), this was the one that launched him into the role of film geek icon. One of the most purely enjoyable films of the 21st century, “Shaun of the Dead” is, on the surface, a send-up of zombie movies, but, like all great spoofs, it displays a deep adoration for the genre it pokes fun at. Beneath that hook, however, is a story about friendship, family, and awkward romantic relationships, one with Pegg at the center as a man struggling to reach maturity. It also takes a bitingly satirical look at modern British life (perfect example: the scene where Pegg’s character doesn’t realize that the people around him are actually zombies). But, when it comes down to it, “Shaun of the Dead” is an out-and-out comedy at heart, showcasing Wright’s incredible visual sensibilities and a love for the cinema. Horror comedy never felt so good.
Rewatching “The Incredibles” recently, I found myself surprised at how heart-racing, hilarious, original, and insightful the film still was after all these years. Made in the midst of Pixar’s golden age, “The Incredibles” employs the idea of a “superhero family” as a jumping off point to explore themes of family, marriage, domestic boredom, midlife crises, and “abnormality.” It packs all of this (and then some) into its 115 minute running time, while also managing to simultaneously be a visually fluid and stunning action movie and a witty comedy for people of all ages. Animated films rarely get better than this.
Picking up where one of the greatest cinematic romances of the 1990s left off, “Before Sunset” was the film we didn’t know we needed. The fact that the audience didn’t know what would happen after Céline and Jesse parted ways at the end of “Before Sunrise” is one of the reasons why the film stood out. And then, out of the blue, “Before Sunset” came along and, fortunately and somewhat amazingly, was an improvement over the original. Following the two characters over 80 minutes as they walk and talk through Paris, the film picks up where its predecessor left off, returning to their conversation of love, relationships, and more. This time, however, the conversation is lent more power by their history and the effects of time, adding further depth and commentary. After all of those years, it appears that Céline and Jesse’s memories of their night together in Vienna have made a deep impression on their lives. Watching their romance get rekindled in real-time is marvelous and a true cinematic achievement.
The yang to Volume 1’s yin, “Kill Bill: Volume 2” picks up where the first one left off but remains a different beast. “Kill Bill: Volume 1” is a relentless, non-stop thrill ride, barely leaving room to catch your breath between all of the astounding action setpieces. “Kill Bill: Volume 2,” on the other hand, moves at a slower pace, adding depth to the slick surface of its predecessor. As visually superior and cool as any Tarantino film, Volume 2 fills in the Bride’s killer backstory and her “complicated” relationship with the titular Bill. It’s also a showcase for some of the most iconic and badass performances of all time from Thurman, Carradine, and Hannah. All of this, and then Tarantino goes and spoils us with stunning and stylistic fight sequences, particularly the Bride’s brutal duel with Elle in Budd’s trailer. Vengeance never tasted so good.
For me, watching “Eternal Sunshine of the Spotless Mind” is like peering into a crystal ball. If I look close enough, I can see my romantic past, present, and future, all pressed together into a blur and filled with both hopes and failures, laughter and sadness. Rarely have a director and a screenwriter synced so perfectly, with Gondry at his most visually inventive and Kaufman at his most original and brilliant. The film follows the relationship between Joel (Jim Carrey, at his subtle best) and Clementine (Kate Winslet, a force of nature), from beginning to end to beginning and so on. By exploring a relationship through the high concept of memory removal, the film creates a complex commentary on society’s relationship with memory and the past. The ambiguous ending is also one of the most beautifully hopeful and heartbreakingly tragic of all time. One thing is made clear by the end: love is a crazy, foolish, messy endeavor. It’s your call whether or not its worth the ride.