Top 13 Indie Comedy Nights To Check Out in Boston 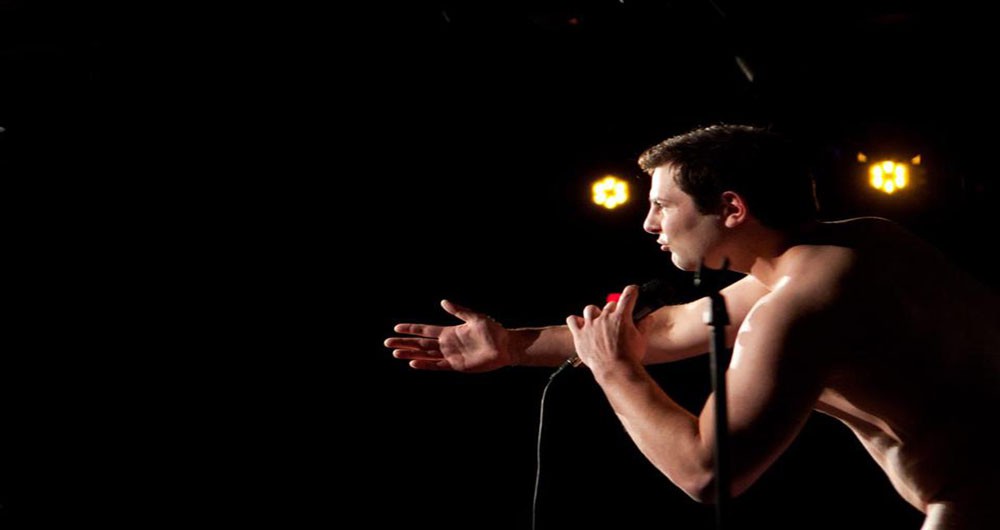 Life is depressing, people are depressing, and we’re all going to die. Let’s see cheap comedy that’s really really good, OK? Here’s a rundown of some of the best weekly and monthly independent shows in the city.

What: Improv, Sketch, Standup, Variety
When: Every first and second Wednesday at 9 p.m.
Where: Bella Luna Restaurant and Milky Way Lounge in Jamaica Plain
Who: Casey Malone, Hannah Foell, Rachel Klein, Jackie Arko, Jeff Perry
Why: No matter what your favorite brand of comedy is, Fine Line has an act that you’re going to fall in love with. If you’re a fan of long form improv, there’s no better indie choice than “Heightened Liability,” run in JP every first Wednesday and featuring some of the best independent improv groups experimenting in a number of edgy improvisational formats. If you’re looking for more of a blend, “Fine Line Comedy Presents” runs every second Wednesday and effortlessly blends standup, sketch and improv in an always-insane, high paced show. Last month’s show ended with lipstick on performers’ faces, a secret note about doughnuts in the audience, and an unusual amount of discussion about youth soccer – and that’s a tame one.

What: Standup
When: Every Saturday at 9 p.m.
Where: The Dugout in BU Central
Who: Thom Crowley, Jenny Chalakian, John Baglio, Adam Langlois, Kevin Seefried
Why: You’ll be hard-pressed to find a better alt room in the city than The Mendoza Line, which sports a consistently great lineup ranging from local favorites to up-and-comers to national headliners, all for the obscenely low price of five bucks. Sure, The Dugout isn’t a palace, but the underground feel of the show is half the fun – hosted by some of Boston’s favorite resident standup wonderful weirdos, there’s no better way to kick off your Saturday night.

What: Standup, Sketch, Music
When: Every third Wednesday at 9 p.m.
Where: Bella Luna Restaurant and Milky Way Lounge in Jamaica Plain
Who: Al Park
Why: Run by 2014 Boston Comedy Festival winner Al Park and formerly with 2013 Boston Comedy Festival winner and “Last Comic Standing” competitor Alingon Mitra, Extra Helpings is a standup and variety show of champions. The show, named for the complimentary pizza available to the audience (!), grounds itself in standup and brings in some of the city’s best standup and musical comedy acts to solidify Bella Luna as one of the best rooms to see comedy every month. If you hate champions, pizza and funny people, do not see this show.

What: Standup
When: Monthly on Thursday at 8 p.m.
Where: Davis Square Theater in Somerville
Who: Ryan Donahue
Why: Formerly at ZuZu, Strange Behavior migrated its show and its mission over to Somerville recently with a low price tag ($10) for some of the biggest names in upcoming comedy paired with a local opener, hosted and programmed by Boston Comedy Festival finalist Ryan Donahue. Though it’s only two shows deep at the new venue, Strange Behavior has already attracted big names like Jared Logan (Comedy Central’s The Half Hour), Kara Klenk (writer for Girl Code), Sean Donnelly (Late Night with David Letterman) and Anthony DeVito (Montreal Just For Laughs).

What: Improv, Sketch, Standup, Variety
When: Every Thursday starting at 7:30 p.m.
Where: ImprovBoston in Central Square, Cambridge
Who: ImprovBoston
Why: Though it’s not technically an independent show, ImprovBoston does such a great job of developing and fostering local talent that they deserve a shoutout. Thursdays are an especially good night to drop by – with a choice of Mainstage (the theater’s finest improv), Sketch Haus (independent sketch teams) or their rotating 9:30 p.m. slot, there’s always something weird going on. Whether your late-night choice is Naked Comedy with Andy Ofiesh on first Thursday, local luminary Dan Crohn’s soon-to-debut standup Power Hour on second Thursday, the famously insane and often controversial Kerfuffle on third Thursday (run by the Fine Line folks, no less), variety talk show So That Happened on fourth Thursdays or sex-positive delight The Sextacular Show once in a blue moon, there’s never a dull moment. (Pictured is comedian Billy Procida performing at Naked Comedy.)

(Editor’s Note: The author of this article is a member of ImprovBoston. She also happens to be super funny.)

What: Standup
When: Once a month on Sundays, 7 p.m.
Where: Doyle’s Pub in Jamaica Plain
Who: Boston Comedy Chicks (Robin Maxfield and Martha Pearlman Rollins)
Why: In a comedy landscape undeniably dominated by dudes, Boston Comedy Chicks has based its mission on featuring and developing the wealth of female talent in the city, and packs the house at Doyle’s every month with complimentary live-streaming for those who can’t make it out. The organization has banded together with the Women In Comedy Festival, hosted in Boston every spring, and has begun to host all-female showcases at Laugh Boston by the seaport to big audiences and applause. Boston Comedy Chicks has become a part of the landscape in the city and it’s well worth your butt in a seat.

What: Standup, Sketch
When: Almost every Friday at 7 p.m.
Where: Great Scott in Allston
Who: Rob Crean
Why: Run by local standup legend Rob Crean’s Anderson Comedy, The Gas is a longtime fixture in the Boston comedy scene and brings a nearly-weekly showcase of incredible standup to a stage normally inhabited by musicians. Booked to the nines with occasional headlining acts like Andy Daly (star of Comedy Central’s Review) and Josh Gondelman (writer for Last Week Tonight), one of the most fun parts of every show is the Lightning Round, where comics passing through get two minutes of stage time to test drive a new joke and win over the crowd. It’s more than just an awesome show, it’s an important venue cross-over that exposes a lot of new audience members to the local talent, and the perfect start to a Friday night.

It Just Got Weirdo

What: Standup, Storytelling, Poetry
When: monthly Tuesdays at 8:30 p.m.
Where: Weirdo Records in Central Square
Who: Wes Hazard
Why: If you’re one of the twenty-five people who makes it into this monthly showcase, consider yourself lucky – It Just Got Weirdo is the most comfortable you’ll ever feel in the throes of claustrophobia, and the intimate venue influences the unique feel of this show. Run by comedian-poet extraordinaire Wes Hazard and Angela Sawyer (comedian and owner of Weirdo Records), standups perform mere inches from their audience and often features performers from the world of poetry, storytelling, magic and more. Enjoy a beer on the house, compliment the incredible artwork produced for every show by Ellen Dubreuil and laugh as Hazard gifts every performer a rare something-or-other from the store.

What: Standup
When: Every third Thursday at 9 p.m.
Where: Arts at the Armory in Somerville
Who: Ethan Marsh
Why: Castle of Comedy is a standup-centric show that’s been running to impressive audiences in Somerville for more than two years by local luminary Ethan Marsh in a cozy cafe setting. Known for its impressive local acts and surprise drop-in guests, Castle of Comedy is a great start to a Thursday night  for any fan of standup.

What: Improv, Sketch, Standup, Variety
When: Every night Thursday – Saturday
Where: The Riot Theater in Jamaica Plain
Who: Joseph Gels
Why: Though it’s only had its doors open since last Halloween, The Riot Theater has already asserted itself as a hotbed for local talent in improv, sketch and standup with three nights of programming a week in its own space in JP. Resident fixtures of the Boston improv scene like Boston ComedySportz and the ImprovBoston Touring Company perform regularly as well as a number of independent themed nights – recent favorites include the Nostalgia Block included Improvised Dream Phone and The Underdogs (’90s inspired improv) and the newly launched Stand Up Break In features local standups and offers headlining slots to up-and-comers. The Riot is poised to become a permanent fixture in the Boston comedy scene, so take in a show now and say you saw then way back when.

What: Sketch, Standup, Storytelling
When: Every Monday at 7 p.m.
Where: Johnny D’s in Davis Square, Somerville
Who: Kevin Quigley
Why: For over a year, Johnny D’s Comedy Presents has been the best 45 minutes you can spend on a Monday for four bucks, hosting everything from bi-weekly standup nights to sketch showcases to, and we’re not kidding, a showcase of dudes that booker/local author-performer Kevin Quigley would have sex with. It sounds quirky and bizarre because it is in all the best possible ways, and no matter the night’s theme Johnny D’s is a guaranteed good time. Plus, you can stay for trivia after at no extra cost, if that sweetens the deal.

What: Standup, Sketch, A Cappella, Storytelling, more
When: Every second Tuesday at 8 p.m.
Where: East Meets West Bookstore in Central Square
Who: Kwasi Mensah
Why: Standup+ a Little Bit More is yet another excellent cross-breed comedy show that bases itself in standup comedy but branches out into a new sector of the arts every month – past shows have featured a cappella, sketch, music, storytelling and more. Guaranteed variety with standup quality every time, and a progressive, art-filled space like East Meets West in Central is an inspired place for host and booker Kwasi Mensah to bring comedy to to the forefront.

What: Standup, Variety
When: varies
Where: Savin Bar and Kitchen in Boston
Who: Bethany van Delft
Why: Standup Bethany van Delft has been a fixture of the Boston comedy scene for years and we’re thrilled to see that she’s programming her own monthly show. Grab a bite, a beer and a taste of some of the best standup the city has to offer all in one fell swoop, and catch tonight’s show while you’re at it.

On the Radar: The Ranger Zone (run by Aimee Rose Ranger) and Chrome Dreams (run by Andrew Durso) – both standup-centric rooms in Cambridge with promising debuts and talented showrunners. Take notes.

Don’t stop there, though – there are a ton of different shows to check out all over the city, and even though there’s only one you, I will personally store you in my backpack and show you around.

END_OF_DOCUMENT_TOKEN_TO_BE_REPLACED

Enter to win a pair of tickets to attend The Hess Collection Seminar and Dinner as part of Boston Wine Festival 2018 at the Boston Harbor Hotel on Wednesday, March 14th. END_OF_DOCUMENT_TOKEN_TO_BE_REPLACED

I referred to it as the “best kept secret” in Boston arts for the holidays. END_OF_DOCUMENT_TOKEN_TO_BE_REPLACED

Boston’s arts scene shines at this time of year. END_OF_DOCUMENT_TOKEN_TO_BE_REPLACED

It’s so much more than a holiday show. END_OF_DOCUMENT_TOKEN_TO_BE_REPLACED

Rock for a cause this holiday season. END_OF_DOCUMENT_TOKEN_TO_BE_REPLACED

Get out and see a show this holiday season, and save some money when you do. END_OF_DOCUMENT_TOKEN_TO_BE_REPLACED

You can help give the gift of music to kids in need this holiday season. END_OF_DOCUMENT_TOKEN_TO_BE_REPLACED

Be honest: when’s the last time you attended a Gala? END_OF_DOCUMENT_TOKEN_TO_BE_REPLACED