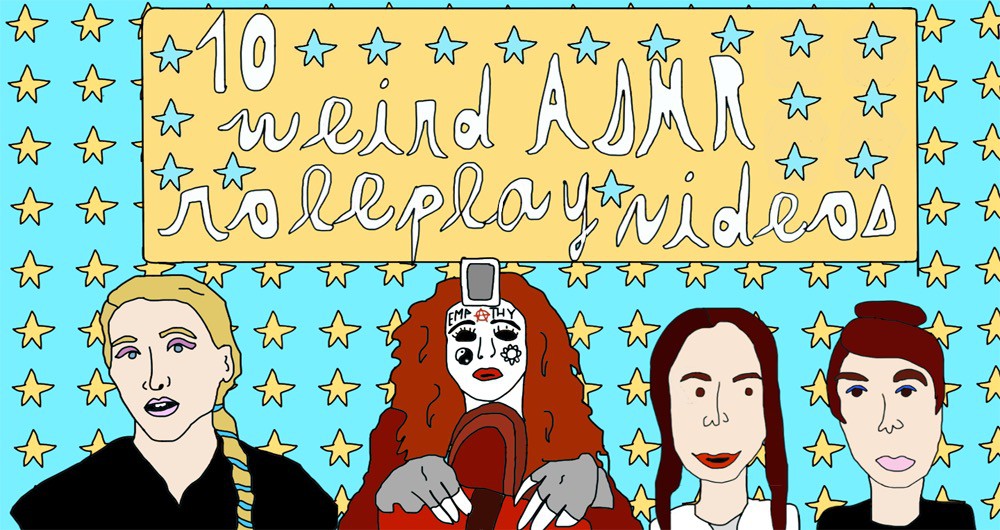 ASMR (short for Autonomous Sensory Meridian Response) is one of those brainchilds of the Internet that you’re either enamored with or completely baffled by. On the surface, it’s men and women whispering and speaking softly into a binaural microphone with the intent of relaxing their listeners – a “tingle” response that radiates through the head is the desired response, though there isn’t yet scientific evidence that backs the trend.

Proof or no proof, millions of viewers can’t be wrong…in theory, anyway. Most self-proclaimed ASMRtists take this concept to the next level in ways that experiment with video and aural “triggers” to calm the nerves and make listeners feel at ease – the practice is cool, but the role-play tactics ASMRtists use to achieve this end can sometimes be intense. Without further adue, the top 10 strangest ASMR videos that we secretly love.

Why is ASMR so popular amongst soft-spoken European women? You’ll find it over and over, and Dutch-turned-American account TheWaterWhispers (actual name Ilse) is one of the more popular ones. Here we have an ASMR video of Ilse telling you you’re awesome, in case no one actually thinks you are. THANKS, ILSE. (Also, she met her soulmate on an ASMR chat board? ILSE WHAT!?!)

From popular user ASMRrequests, this video is based around the Charlie Kaufman created Lacuna, Inc., the company hired by Jim Carrey’s character Joel in Eternal Sunshine of the Spotless Mind to erase the memory of Kate Winslet’s quirky but damaged character Clementine. Nearly an hour long, Ally (code name ASMRrequests) plays a doctor who interacts with the viewer. Doctor roleplays are relatively common, but this one is a little spooky because you’re sort of thinking of your least favorite memory the entire time.

That’s right, even the extremely specific world of ASMR isn’t safe from the world’s most ubiquitous children’s movie. Who knew that Elsa the Snow Queen was also into soft speaking and crinkling paper? Culture truly is cyclical.

Originally posted in 2013 by ASMRrequests, this was one of the first ASMR videos to get some attention to the “Tingleheads” community (I know, I know). It’s remarkably well-produced and features the ASMRtist as a travel agent guiding the viewer through an interstellar vacation planning that includes putting them into “deep sleep,” which is apparently fine in this universe. Hang in, the sequel is even more intense.

ASMRtist Heather Feather has made some truly insane videos and is a solid whisper-actress in her own right, but this one takes the cake. Heather plays her own twin Lohan-style in this one, and they collaborate on giving the viewer an hour-long scalp massage. What? But it’s cool.

Yes, ASMRrequests again. This is as close as a Tim and Eric-ASMR crossover video will get, and features a bunk psychic with a Midwestern accent in killer 1980s public access editing style…plus, those glasses.

4. “The Quiet One: The Files of Dr. C.D. Clemmons, ASMR Plague Doctor”

A half hour video of a man in a bird mask giving a medical examination to a Lego.

3. “The Soothing Crooner and Sleep Man”

This one…I don’t know. “I will guide you to the dream world. I am THE SLEEP MAN.” He also references his brother “The Nightmare” (insert echo effect here) and his cousins “Stress” and “Anxiety.” Don’t worry though, guys, he has a Sword of Silent Whispers and a wooden shield and his battle cry is “By the power of the dream world, let me lead the way!”

This is next level insane. User Ephemeral Rift has no limit of absolutely insane characters that you’ll have to peruse his channel to believe, but this character Margaret is a fave. How is this terrifying, vaguely Fawkes-ian mug relaxing? It isn’t, but spoilers, she’s wearing duct tape gloves and has an undead physician and an axe in her leather bag.

ASMRtists: ASMRrequests and Heather Feather
I WATCH THIS VIDEO ALL THE TIME. ASMRrequests took an entire year to deliver a sequel to the original creepy “Departure” video, and collaborates with other ASMRtist Heather Feather in this high production, half hour fever dream. The makeup, the sound design, that vaguely terrifying dystopian future…it’s not exactly relaxing, but it makes me wish YouTube videos could win Emmys.

There’s plenty of ASMR accounts that make other types of videos, but the role plays are close to my heart because it’s of their close proximity to the completely insane. TINGLEHEADS FOR LYF.

A decade of Wreck The Halls. END_OF_DOCUMENT_TOKEN_TO_BE_REPLACED

Artists for Humanity Co-founder Jason Talbot and Major Gifts Director Emily Smaldon were in studio this morning with Mallory Bazinet, Event Manager for GrandTen Distilling. Jason and Mallory talked about The Contemporaries, their upcoming event to launch a new patron group for young professionals. Click here to join them on Thursday, August 17! END_OF_DOCUMENT_TOKEN_TO_BE_REPLACED

Carl Isaacs, General Manager of Renewal by Andersen of Boston joined me in studio this morning to talk about a special offer: save 20% on windows and patio doors and your installation is included. Listen in for the details! END_OF_DOCUMENT_TOKEN_TO_BE_REPLACED

Leah Wellbaum from Slothrust brought her trusty six-string to Studio B and turned in the first RadioBDC Session of 2017. Check out her three songs and her chat with Julie Kramer, recorded live on February 28, 2017. END_OF_DOCUMENT_TOKEN_TO_BE_REPLACED

Aida Villarreal-Licona is the Events Coordinator for SoWa Boston’s Art & Design District. She was in today to talk about their holiday shopping event this Thursday December 15 from 4-8 p.m. at 450 Harrison Avenue. A great opportunity to help local artists and get some holiday shopping done! END_OF_DOCUMENT_TOKEN_TO_BE_REPLACED

Mike McColgan and Lenny Lashley of Street Dogs were in session on November 30, 2016 to play three songs and chat about their annual Wreck The Halls shows at Brighton Music Hall December 15-18. END_OF_DOCUMENT_TOKEN_TO_BE_REPLACED

Tegan and Sara stopped by for a chat before their House of Blues show on Halloween night. END_OF_DOCUMENT_TOKEN_TO_BE_REPLACED