Too many craft beer festivals in Boston? Hell no 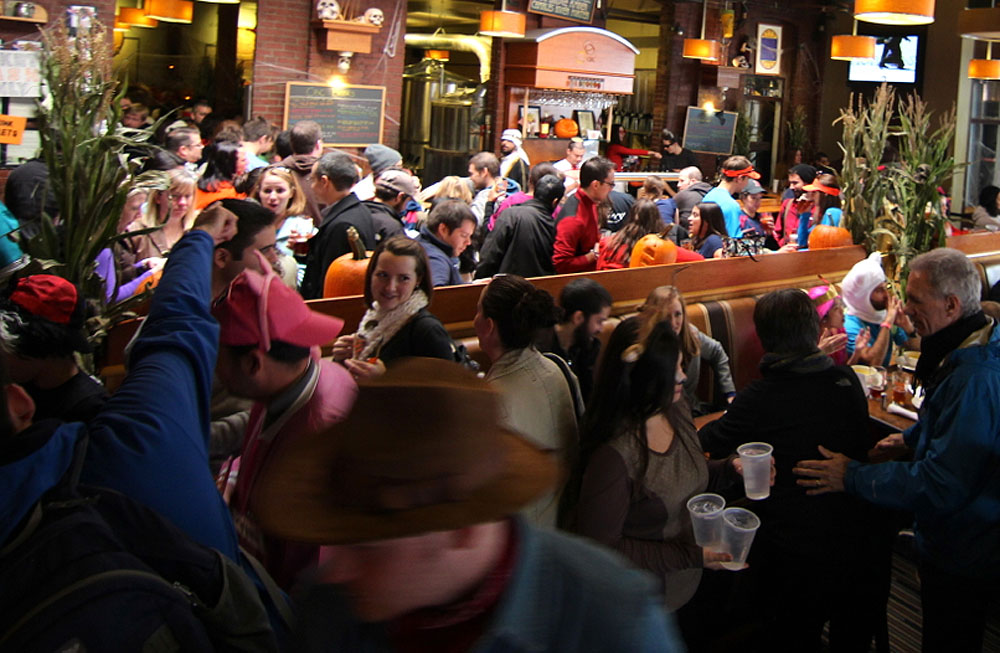 There’s a pivotal moment in the 2006 seminal comedy Beerfest that serves today as an allegory for the increasing prevalence of beer festivals throughout the country.

Landfill, a rotund and relatable alcoholic played elegantly by Kevin Heffernan, is pushed into a giant vat of beer by Cherry (Mo’Nique) for reasons that don’t matter whatsoever for our purposes. The yeast, acting as quicksand (science), pulls Landfill to the bottom. In a desperate effort to escape drowning, Landfill opens his gullet wide and gulp, gulp, gulps as much beer as he can, attempting to drink his way to safety.

He fails and dies a bloated slob, as we humans are wont to do.  Should we (we should) ascribe symbolic attributes to the scene’s key players, Landfill represents the consumer while Cherry is the industry. Our thirst for craft beer is insatiable, as evidenced by its meteoric rise in popularity over the last 30 years, and to appease us, the industry is taking over the calendar with more and more beer festivals and beer weeks than our doctors feel comfortable allowing us to attend.

The question is, how many times can we go bottoms up before drowning?

October brought the Great Pumpkin Fest to Cambridge and this week, the 4th annual Local Craft Brew Fest hosted by the Sustainable Business Network of Massachusetts will roll kegs into the Moakley Courthouse (presumably so you can be easily arraigned should you drunkenly piss on someone’s leg). After that, we’ll have Extreme Beer Fest in March, American Craft Beer Fest in May, and more sprinkled in throughout the new year.

People in other parts of the country have written that the market is oversaturated (see: 1, 2), and that’s a fine opinion to take, so long as you have no problem being wrong and a wet blanket.

Here’s why: they all serve completely different purposes. There’s a reason people celebrate Christmas and Easter rather than just Christmas twice (I have no idea what the reason is, but I’m sure there’s one). The same applies here.

At SBN’s festival this Friday, beer drinkers in the Hub will be celebrating local libations from all across New England. Sam Adams, the biggest name in craft will be there, but so too will lesser-known New England breweries like Blue Hills, Baxter, and Smutty Nose, among others. It’s a chance to see what’s out there and hey, what do you know, this shit is made in your own backyard, so maybe you’ll find a new go-to brew.

Extreme Beer Fest, on the other hand, is meant for you test your palate. To explore. If it were a religious holiday, it’d be one of the weird ones that only zealots still celebrate and everyone else has sort of been like “…eh, I dunno about that one.” But that’s OK, because in this country we have religious freedom.

The American Craft Beer Fest is, well, I can’t find a discernible purpose for it other than getting hammered. There are way too many beers, which makes exploring difficult and they come from all over so it becomes a race to imbibe as much as possible to get your money’s worth (and these things are expensive, so I’ll concede that to any haters).

Then, of course, there are all the seasonal festivals, which roll out offerings meant to pair with the weather. You can find new meaning and purpose in every festival if you’re sober enough to keep your eyes open.

So are there too many beer festivals? Probably. Who cares? I can think of worse ways to die than drowning in beer.*

*Actually, that sounds pretty terrible, but you get the point.

Enter to win a pair of tickets to attend The Hess Collection Seminar and Dinner as part of Boston Wine Festival 2018 at the Boston Harbor Hotel on Wednesday, March 14th. END_OF_DOCUMENT_TOKEN_TO_BE_REPLACED

This year, the festival is welcoming more female wine producers than ever before, making up 20% of all winemakers that will be at the festival. END_OF_DOCUMENT_TOKEN_TO_BE_REPLACED

The holidays are here, so raise a glass. END_OF_DOCUMENT_TOKEN_TO_BE_REPLACED

‘Tis the season to mix a nice, stiff drink. END_OF_DOCUMENT_TOKEN_TO_BE_REPLACED

Warm up with Tito’s on your sweater and Tito’s in your glass. END_OF_DOCUMENT_TOKEN_TO_BE_REPLACED

There’s a ton going on at Idle Hands in Malden this spring. Dan McDonnell and Josh Deering joined me in studio to talk about Maifest, what’s new in the Taproom, and their collaboration with The Black Ale Project. Oh, and don’t miss Idle Hands at BeerAdvocate’s Microbrew Invitational next month! END_OF_DOCUMENT_TOKEN_TO_BE_REPLACED

Giovanna Guzman is the marketing coordinator at Kings Bowl, who you can visit in the Back Bay, Burlington, Lynnfield, Dedham, and soon in the Seaport. We talked beverages, naturally, seeing as it’s Thirsty Thursday. And we sampled sangria. And it was soooo good. END_OF_DOCUMENT_TOKEN_TO_BE_REPLACED

These five words might change your life: Farmer Willie’s Alcoholic Ginger Beer. Co-founders Nico Enriquez and Max Easton were in studio with me this morning. Nine-packs and kegs of Ginger Session coming next week! END_OF_DOCUMENT_TOKEN_TO_BE_REPLACED

Chef Avi Shemtov–he of the Chubby Chickpea and Single Guy Cookbook–was back in for a visit this morning to talk about his latest venture. TAPPED is a mobile beer catering company that specializes in on-site draft pours of both craft beers and mainstream brands. Thirsty yet? END_OF_DOCUMENT_TOKEN_TO_BE_REPLACED