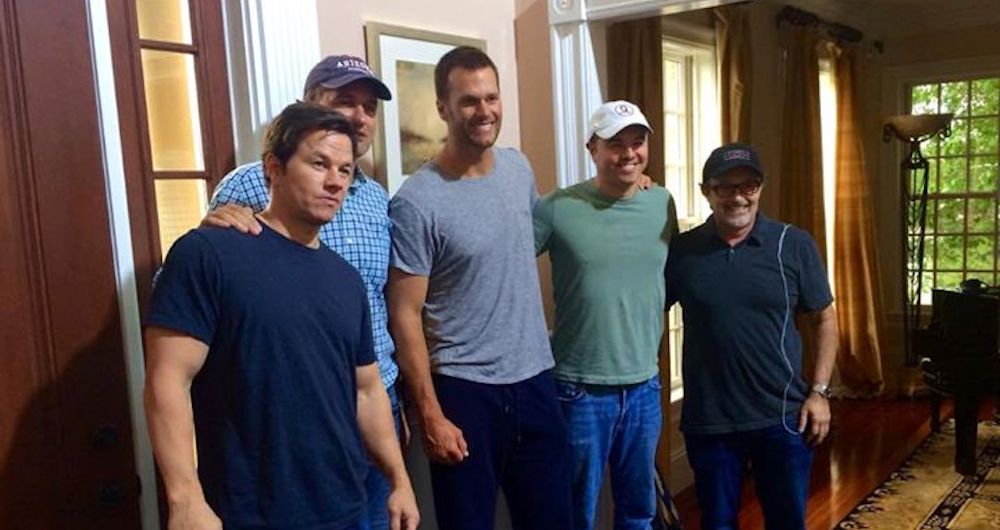 Looks like Touchdown Tom is about to become Tinseltown Tom.

New England Patriots quarterback Tom Brady will be appearing alongside Mark Wahlberg in Seth MacFarlane’s “Ted 2” next summer, as well as joining teammates Rob Gronkowski, Stevan Ridley, and Julian Edelman in the Wahlberg-produced “Entourage” movie, according to an interview Wahlberg did on Bill Simmons’ podcast yesterday. (That may be the single-most Boston sentence I’ve ever written.)

In the video, Wahlberg says Brady gave “an amazing performance” before describing the scene they filmed.

“There were moments where I was always improvising when doing the scene with him. There are times when I’m supposed to be a super fan, so I’m trying to calm myself down before I knock on his door, but I’m pretending that I don’t know who he is, and I keep saying he looks like different people.

“Then of course, I’m playing an air conditioning guy, so I’m asking him to sign the paper, and I ask him if he can sign that to me and Ted and put No. 12 there, and can you put ‘Eli Manning sucks.’ And he put Wes Welker is a traitor, and we keep playing around and playing around and I’m staring at his eyes, and I’m like, ‘Oh my God, they’re bluer than Daytona Beach in MTV Spring Break.”

Wahlberg continued by talking about Brady’s cameo with several other Patriots favorites in the “Entourage” movie, for which Wahlberg is one of the producers.

“We got Gronk, we got Ridley, and we got Edelman all in the ‘Entourage’ movie. And Tom’s in the ‘Entourage’ movie, so I got him in two movies. It’s going to be a big summer for those guys.”

It’s going to be a big summer for the Boston-born Wahlberg as well, as the “Entourage” movie is slated to open June 5, 2015, while “Ted 2” will hit theaters three weeks later on June 26.

Brady also posted a photo with Wahlberg and MacFarlane on his Facebook page this morning, saying “Fun working with Mark and this great group of guys on the Ted 2 set! Lots of laughs! #tbt” 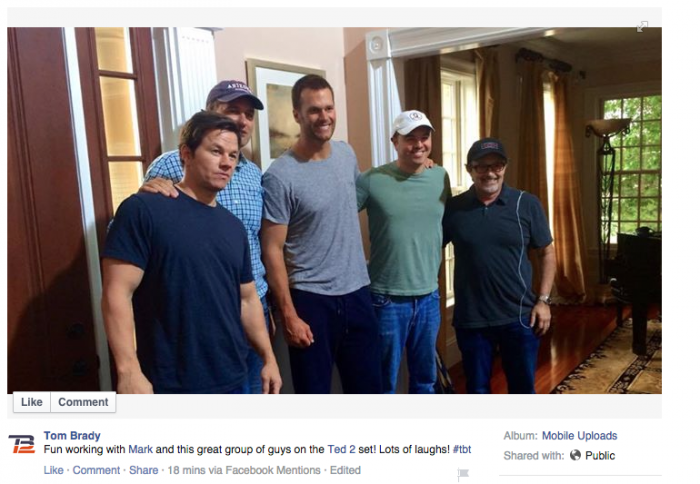 Enter to win a pair of tickets to attend The Hess Collection Seminar and Dinner as part of Boston Wine Festival 2018 at the Boston Harbor Hotel on Wednesday, March 14th. END_OF_DOCUMENT_TOKEN_TO_BE_REPLACED

The Black and Gold continue their run tonight at TD Garden. END_OF_DOCUMENT_TOKEN_TO_BE_REPLACED

Who will make the Class of 2018? END_OF_DOCUMENT_TOKEN_TO_BE_REPLACED

It’s been awhile since we talked Black and Gold. END_OF_DOCUMENT_TOKEN_TO_BE_REPLACED

You’re going to wish you were in the Northern Alps. END_OF_DOCUMENT_TOKEN_TO_BE_REPLACED