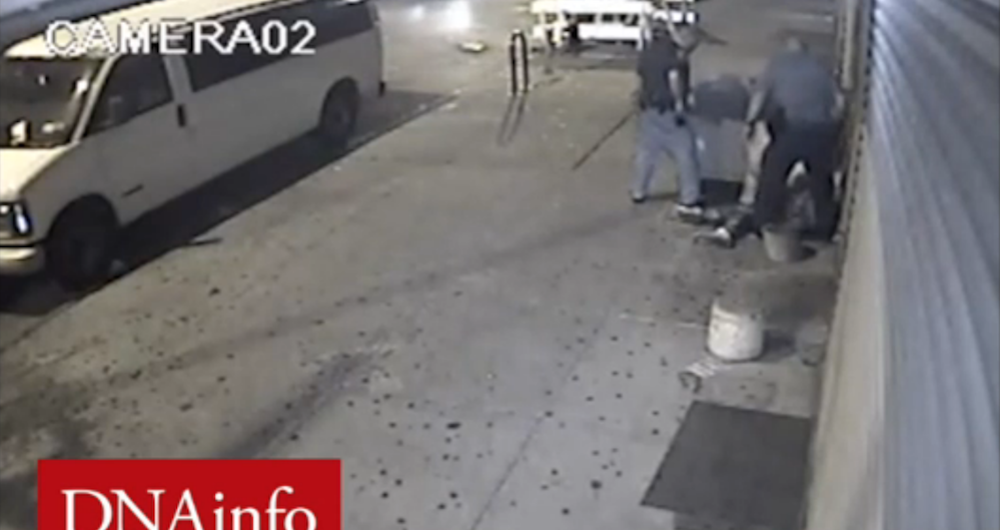 In today’s edition of Depressing Police News, it was announced that officers in Georgia will not be charged for permanently disfiguring a 19-month-old child’s face with a stun grenade during a botched drug raid, while in New York City, video surfaced of NYPD officers pistol-whipping an unarmed teen.

From the Atlanta Journal Constitution:

Nineteen-month-old Bounkham “Bou Bou” Phonesavanh’s nose was detached from his face after a stun grenade landed in his playpen during the raid, carried out by a Habersham SWAT team in May.

A search inside turned up neither guns nor drugs. Wanis Thonetheva, who didn’t even live at the house, was arrested later that day without incident and charged only with possession of methamphetamine.

Bou Bou’s family have been petitioning Habersham County to help pay for medical care, but they have refused, saying “it would be in violation of the law for [us] to do so.”

Meanwhile, in Brooklyn, a pair of officers are under investigation after a video surfaced of them punching and hitting a 16-year-old suspect with a gun even after he appeared to raise his hands and surrender.

The suspect, Kahreem Tribble, tossed a canvas bag containing 17 bags of marijuana before surrendering to police. At that point, according to DNAInfo New York:

Officer David Afanador — his gun drawn — then catches up and rushes straight to Tribble, hitting him in the his face with his gun, breaking a front tooth and chipping another.

On the video, Afanador then holsters his weapon and retraces his steps to retrieve the canvas bag, leaving Isaacs to put the cuffs on Tribble.

But before he does, Isaac punches Tribble again and pushes him onto his stomach.

The video ends with Afanador waving the bag in front of Tribble’s face before smacking him with it.

While the nation’s focus has shifted from the protests in Ferguson (which are still happening, by the way, racist Cardinals fans be damned), the demonstrations have thankfully led to a greater focus in the media on police brutality and miscarriages of justice. Unfortunately, this increased level of awareness hasn’t led to tangible results, just more depressing stories.

While many have called out Davis since a video of her refusing to issue a marriage license to Rowan County residents David Moore and David Ermold went viral in July, relationship columnist and gay activist Dan Savage went a step further on MSNBC Tuesday night, saying that “this is about someone hypocritcally looking to cash in”. He added: “And she is a hypocrite.” END_OF_DOCUMENT_TOKEN_TO_BE_REPLACED

END_OF_DOCUMENT_TOKEN_TO_BE_REPLACED

David Filipov was part of the team that headed up the Boston Globe/Fox25 Olympic Debate last night. He offered his takeaways and analysis after an update on the latest exchange between Governor Baker and the USOC. All in all, our conversation does a pretty good job of getting you up-to-speed on all things Boston2024. END_OF_DOCUMENT_TOKEN_TO_BE_REPLACED