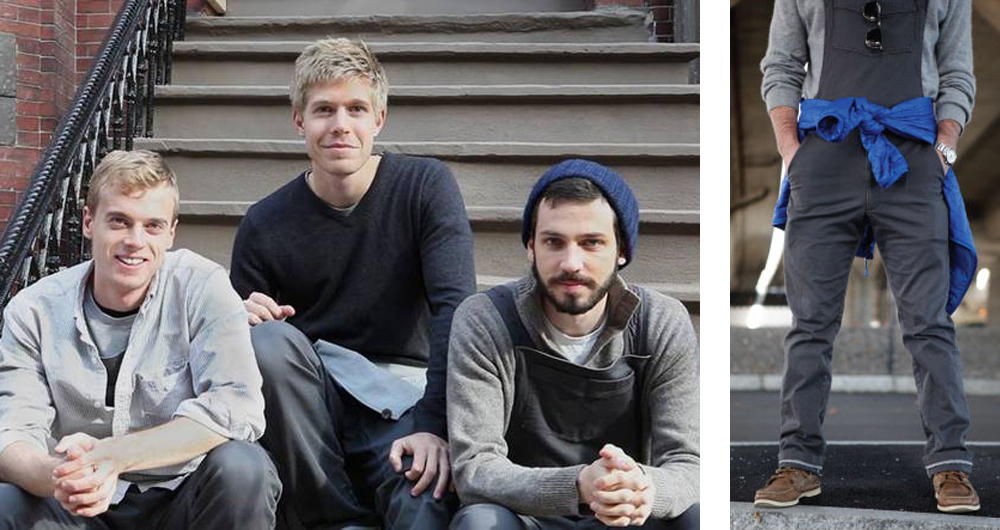 Ever wonder, on any given season, whether at work or just chilling at home, “damn, I wish I could rock a pair of overalls without looking like an extra on ‘Shining Time Station’?”

Lucky for you, the world has now been blessed with Rousers. Created in early 2014 by three friends who met as undergrads at Dartmouth, Matt Jorgensen, Aidan Nelson, and Ben Waller, Rousers were created when the boys were interested in sporting a pair of slim-cut overalls and realized that “men’s overalls hadn’t gotten an update in decades.” Splitting time between Boston and New York (two of them work in management consulting, and the other works in film), the three overall aficionados happened upon a pattern-making and sample shop in the garment district of New York. After nearly ten prototypes, the men settled on a design, one that has been thoroughly analyzed for versatility, style, durability, and comfort.

The Rousers creators have now sent the design to a menswear factory in the Midwest, where they plan to do an initial production run in the US. And they’re able to do this thanks to the joys of crowdfunding. In a Kickstarter campaign, the three recently surpassed their goal of $25,000, recruiting nearly 300 backers to date and spreading the word about their beloved Rousers. Having been praised by the likes of Four Pins and Business Insider, these stylish overalls are no joke.

“When you hear [overalls], it sounds almost like a little bit of a troll,” Jorgensen told Business Insider.”Overalls, to us, embody a lot of what clothing should be: fun, practical, and versatile. There is this feeling that fashion should be fun without taking itself too seriously.”

You still have time to donate to the trio’s Kickstarter campaign to have a chance to sport these stylish overalls before the rest of the dudes in your neighborhood. Now that the goal has been met, however, you can guarantee an initial production run, so it might not be long before you see Rousers struttin’ their way up and down your block.

Enter to win a pair of tickets to attend The Hess Collection Seminar and Dinner as part of Boston Wine Festival 2018 at the Boston Harbor Hotel on Wednesday, March 14th. END_OF_DOCUMENT_TOKEN_TO_BE_REPLACED

Boston band Funeral Advantage is Tyler Kershaw. And Tyler Kershaw had a fun childhood, so it seems. END_OF_DOCUMENT_TOKEN_TO_BE_REPLACED

Perry put me on to daephne and the album blew my mind. END_OF_DOCUMENT_TOKEN_TO_BE_REPLACED