Those Claiming the US Choked Against Portugal, Please Shut Up 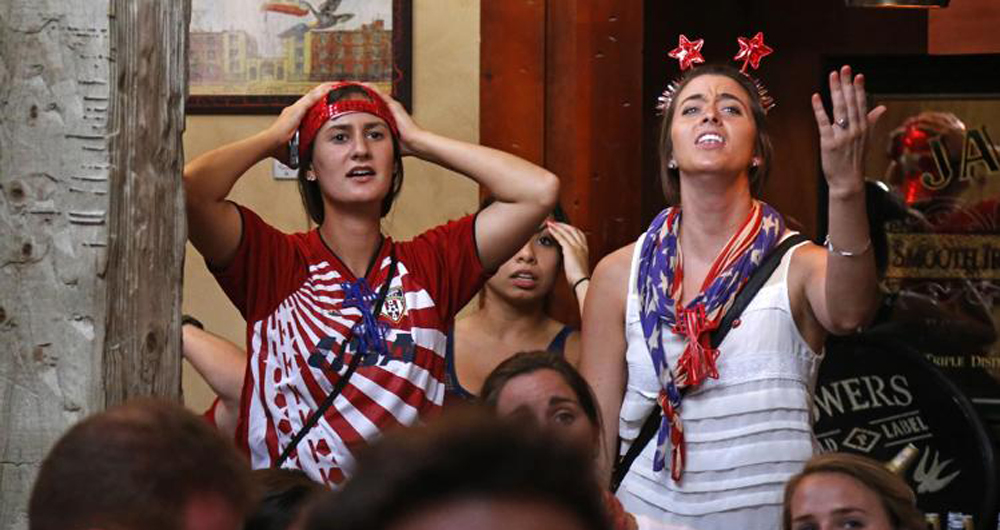 All that the United States Men’s National Soccer Team had to do was weather the storm of one last Portugal offensive possession. Unfortunately for the boys in red, white and blue, Cristiano Ronaldo delivered a perfect ball to Silvestre Varela, who was able to tie the game 2-2 in the last minute of added time. The US is now 1-0-1 through two matches in the group stage of the 2014 FIFA World Cup.

After the draw became final just seconds later, many in the Twitterverse were calling the US chokers for letting up the last-second goal. Those who took to their keyboards to proclaim just that are flat out wrong. It’s likely those folks don’t realize that the US is not only very much alive in this World Cup, but that was a fairly big victory for the Yanks, even if it wasn’t actually a victory.

That was a Buffalo Bills level choke job #USMNT

The United States just pulled out a draw against the same Portugal that made it to the 2006 World Cup semifinals. The same Portugal that is currently ranked No. 4 in the world by FIFA. The same Portugal that is led by Ronaldo, who won this year’s Ballon d’Or. For non-soccer people, that’s the award given annually to the player FIFA considers to be the best in the world that season. After falling behind 1-0 rather early in the match, Team USA rallied back in the second half on Sunday thanks to some magnificent ball movement and creativity up front. Jermaine Jones and Clint Dempsey netted the goals but the entire team played some of the best soccer ever seen by a US team on the world stage. Even without country-favorite Jozy Altidore in the starting lineup, this US squad put the pressure on the Portuguese defense all match long. The side led by Dempsey was more dynamic and threatening than the won with the world’s best player for 95 minutes. Those are statements that would have never been true if this match took place in the 2006 or even the 2010 World Cup. Portugal boasts one of the best men’s national soccer teams in all of Europe, a part of the world that loves the sport much more than the States do. While Jurgen Klinsmann and co. were just seconds away from a huge upset victory, a draw is still a moral one for this team.

#choke trending. It times like these when we realize why the USA doesn’t watch soccer.

The United States were the clear underdogs in this fixture. They fell behind early and as ESPN noted during the game broadcast, the Yanks have never come back and won a World Cup game after conceding the first goal. While that stat still rings true after this result with Portugal, the draw with the European powerhouse should be praised. Despite being in the tournament’s “group of death,” this US side has yet to lose and controls its own destiny to advance to the round of 16.

Despite the last few seconds, Klinsmann’s group played a stellar game against a very good team and should be praised for that, not mocked.

The Black and Gold continue their run tonight at TD Garden. END_OF_DOCUMENT_TOKEN_TO_BE_REPLACED

Who will make the Class of 2018? END_OF_DOCUMENT_TOKEN_TO_BE_REPLACED

It’s been awhile since we talked Black and Gold. END_OF_DOCUMENT_TOKEN_TO_BE_REPLACED

You’re going to wish you were in the Northern Alps. END_OF_DOCUMENT_TOKEN_TO_BE_REPLACED

END_OF_DOCUMENT_TOKEN_TO_BE_REPLACED

Bill might be “on to Tennessee,” but we’re not. END_OF_DOCUMENT_TOKEN_TO_BE_REPLACED