This virtual reality experience lets you fly like a bird. And it just landed in Cambridge. 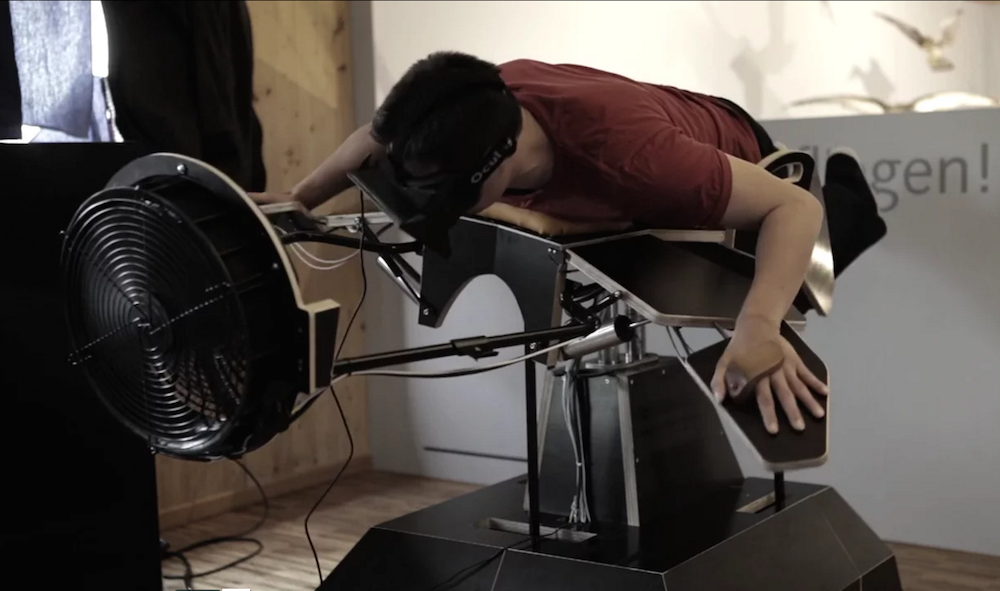 It’s a bird! It’s a plane! It’s… a virtual reality experience that lets you feel like you’re flying. And it’s coming to Cambridge on Wednesday.

Birdly combines an Oculus Rift VR headset and a large mechanical contraption that simulates the experience of flapping wings when you lie down and strap your arms in. There are fans that blow air in your face too, because it doesn’t take a rocket scientist to know that a flying simulator better simulate some whipping wind.

Birdly is the brainchild of Swiss artist/developer Max Rheiner, a senior lecturer at Zurich University of the Arts whose research and artistic interests lie in interactive experiences based on virtual/augmented reality. According to Rheiner, he began work on Birdly in 2013 and completed it with a small team within a year. Birdly is the flagship piece of Rheiner’s VR company Somniacs, from the Latin word “somnium,” meaning “to dream.”

“Birdly was inspired by people’s ancient dream of flying,” Rheiner said. “It’s an incredible feeling you really have to experience for yourself.”

Early reviews of the simulator have been extremely positive, with Josh Batson’s review of the experience for Wired headlined “The Oculus Rift made me believe I could fly.”

Birdly will be hosted at Le Laboratoire in Cambridge starting on Wednesday, December 2nd, through Saturday, December 5. Admission is free, but you cannot reserve a time slot to test out Birdly, as the experience is first-come, first-serve. Additionally, tickets to a free talk from Rheiner Wednesday night have already sold out.

For the gallery’s full hours, check out their website. And remember, the early bird gets the worm.