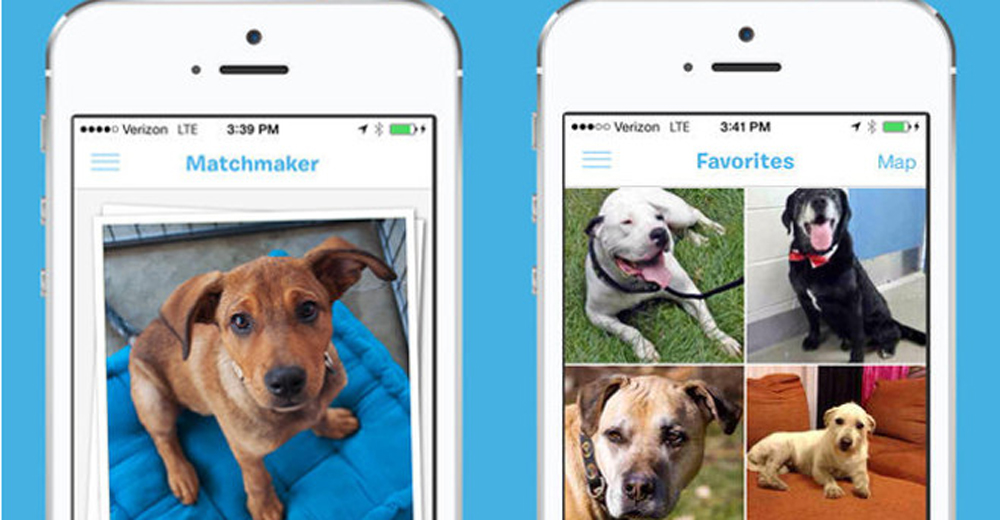 I know what you’re thinking– what sick bastard is looking to hook up with a dog tonight? Or slightly less creepy humans, but nonetheless creepy humans might be excited at the thought of a weird dog cross-breeding service that you can coordinate over your mobile device.

Luckily, BarkBuddy isn’t like Tinder in that it’s meant for those kind of hookups. As a matter of fact, as far as apps in general go, it’s pretty damn normal. The program, created by Bark & Co., the same canine-loving company that owns the monthly  treat bundle service BarkBox and the on-call visiting vet service BarkCare, matches prospective owners with dogs that are currently being housed at nearby shelters.

There are a few things to take away from this. First off, if you lack restraint, this is a bad app for you. Sure, puppies are cute, but you can always Google image search the word “puppy” and have just as much fun without that one button that allows you to adopt one. Get your average softie on Barkbuddy and it would only be a matter of time before his or her apartment is inhabited by six pooches hopping around, knocking things over and crapping on the carpet.

Secondly, you can only hope that this will make dogs more photogenic. How many times have you tried to take a selfie with your parents’ dog before just saying “screw it” and giving up because the dog was being restless? If it depended on their adoption, however, you’d have to think (unless dogs are like stupid or something) these pups would make their “prof pic” look like a Sarah McLachlan ad.

Lastly, despite it being an app, and probably a really poor idea to adopt a dog that you’ve never handled in real life (although it doesn’t quite let you purchase from the app itself, instead it connects you up with the proper shelter), this will likely result in more abandoned pooches finding homes, which is a beautiful thing. In a Time Magazine article, co-founder Henrik Werdelin says that the app already has, “250,000 dogs in the database, and we are open to talking to any shelter about joining us.”

Whether you’re serious about rescuing a dog or you just want to swipe through photo after photo of lonely pups and say “Awww, poor thing,” the world of dog-dating apps can now be your oyster.

We ate vegan blueberry cake and it was amazing. END_OF_DOCUMENT_TOKEN_TO_BE_REPLACED

HUBweek came to Boston, and we were there to take it all in. END_OF_DOCUMENT_TOKEN_TO_BE_REPLACED

Dan Croll is a great musician and an even better person. END_OF_DOCUMENT_TOKEN_TO_BE_REPLACED

We kicked off the weekend with a visit from Sasha Purpura, Executive Director of Food For Free. Sasha was back to promote next month’s Craft for a Cause event, a craft beer festival celebrating the Central Square Cultural District. END_OF_DOCUMENT_TOKEN_TO_BE_REPLACED

Summer is the hungriest time of the year. Millions of kids rely on school meals, but in summer, the meals disappear. HGTV’s Taniya Nayak was in studio this morning to talk about Taste of the Nation this coming Tuesday, June 6, which benefits Share Our Strength’s #NoKidHungry initiative. Click here to get your tickets. END_OF_DOCUMENT_TOKEN_TO_BE_REPLACED

Community Servings provides nutritious meals to individuals and families living with a variety of illnesses. Stephanie Carrigg was in studio this morning to talk about this year’s Meals4Moms program, where your contribution not only helps feed moms in need, but nets you some great goodies for a mom in your life. END_OF_DOCUMENT_TOKEN_TO_BE_REPLACED

Continuing our month-long series spotlighting videos we hope will inspire you think. END_OF_DOCUMENT_TOKEN_TO_BE_REPLACED

The first in a month-long series focusing on new songs that go a little deeper. END_OF_DOCUMENT_TOKEN_TO_BE_REPLACED

Matt Allen is the Field Director for ACLU of Massachusetts. He was in to talk about the ACLU: who they are, what they do, and how to get involved! END_OF_DOCUMENT_TOKEN_TO_BE_REPLACED