With the holiday season fast approaching, a lingering question remains: What is the greatest Christmas movie of all time?

From Thomas Edison’s 1908 silent film version of “A Christmas Carol” to Robert Zemeckis’ 2009 3D motion capture animation adaptation of the same Dickens tale, Christmas films have certainly evolved over the last 100+ years, but yet much remains the same. Unfortunately, as we’re already busy enough over the holidays with ugly sweater parties, last-minute gift shopping, and visiting with relatives, there’s precious little time to curl up on the couch with a holiday classic. That’s why we’ve taken the initiative to create this Ultimate Christmas Movie Bracket, to determine which of these 16 all-time great films reigns supreme.

Each day this week, readers will have a chance to vote for a new round of Christmas movie match-ups, until an ultimate winner is revealed Friday morning. Before we begin, a few caveats as to how we chose the field, and why your favorite film didn’t make it:

– We only wanted one version of Charles Dickens’ classic tale, so while 1951’s “A Christmas Carol” made it, “Scrooged” and “A Muppet Christmas Carol” were left out in the cold. (And yes, the second act of “It’s A Wonderful Life” is pretty much a direct rip-off of “A Christmas Carol,” but it’s different enough to warrant inclusion.)

– We also regrettably did not include Christmas specials, so “A Charlie Brown Christmas,” “Frosty the Snowman” and “Rudolph the Red-Nosed Reindeer” didn’t qualify.

– The rest of the field was determined through intense office discussions, both in-person and via office chatrooms. During this process many arguments arose, like whether “Batman Returns” is technically a Christmas movie (verdict: yes) and whether “Jingle All the Way” was a modern classic (verdict: no).

If your favorite film didn’t make our field of 16 despite those caveats, we apologize. Without further ado, on to the voting. 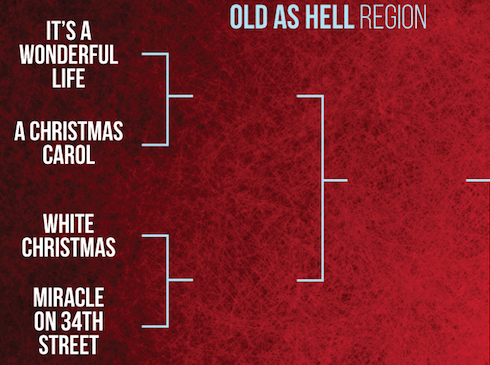 The movies in this region may be old (as hell), but much like a fine wine or Charles Dickens novella, these four films only get better with age. 1946’s “It’s A Wonderful Life” wasn’t a hit when it first came out, but it’s been the popular vote for Greatest Christmas Movie Ever title since a resurgence in viewing in the ’80s. “White Christmas” is still charming audiences at Boston theaters this year, and would probably be enjoying a “Glee”-fueled comeback right now except that it never really went away. The newest film in our bracket, 2003’s “Elf,” owes its “Christmas magic among us” narrative to one of our oldest entrants, 1947’s “Miracle on 34th Street.” And the 1951 version of “A Christmas Carol” starring Alastair Sim (released as “Scrooge” for non-US audiences) is still arguably the best version of Dickens’ timeless tale committed to film — which is saying a lot, given the sheer number of adaptations. -Kevin Slane 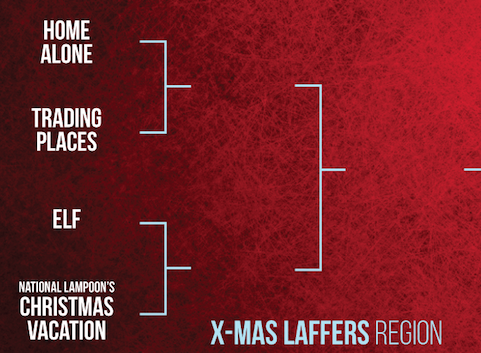 Christmas and comedy go hand in hand, so it’s only natural that all four of these films can easily be filed under “kneeslapper.” The match-ups are tough though. An all-time great child acting performance from Macaulay Culkin in “Home Alone” taking on two comedy giants in Dan Aykroyd and Eddie Murphy at the peak of their careers in “Trading Places”? New school SNL hero Will Ferrell in “Elf” vs. old school SNL pioneer Chevy Chase in “National Lampoon’s Christmas Vacation”? The competition is fierce. If I had my way, Culkin would meet Chase in the semis, and “Home Alone” victory parade would extend all the way through the finals. Can’t go wrong with any pick here though. Now leave your vote on the doorstep and get the hell out of here. -Perry Eaton 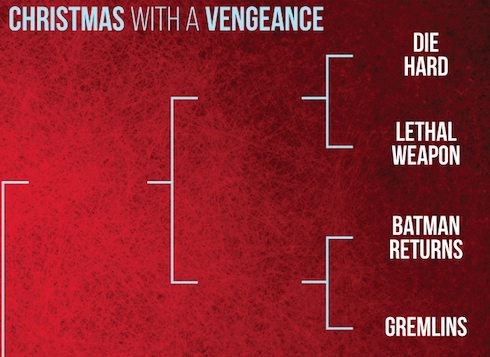 Forget the sappy, feel-good holiday flicks of yesteryear. It’s all about blowing things up and causing mayhem these days. “Die Hard” has arguably emerged as the frontrunner for the title of “classic Christmas movie” but others are duking it out for the honor in our bracket. “Lethal Weapon” opens with “Jingle Bell Rock” and ends on Christmas Day, serving as a sort of morality film for the holidays… but with sweet bonus car chase action. “Batman Returns” takes place in a snow covered Gotham and teaches us the lesson that mistletoe can be deadly. My pick though? The underrated “Gremlins” is the perfect Christmas movie. Cute fuzzy creatures turn deadly and wreak holiday havoc all over town… what could be better? -Michelle Buchman 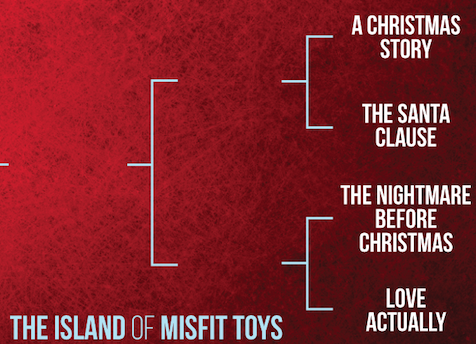 All misfits are safe on the Island of Misfit Toys! …except “The Santa Clause” and “Love Actually.” While those two may be considered more recent Christmas “classics” in some people’s books, they aren’t in mine. Tim Allen (aka Mr. Tool Time) gradually becoming Santa Claus? That’s the stuff of Cronenberg-esque body horror. No thank you. “Love Actually” is a sappy mess that helped to birth holiday ensemble turds like “New Year’s Eve” and “Valentine’s Day.” Goodbye. So it’s down to two of my Christmas favorites: “The Nightmare Before Christmas” and “A Christmas Story.” “The Nightmare Before Christmas” is a delightfully macabre Tim Burton riff on the holidays that I’ve loved since I was a kid. But I’ve got a soft spot for “A Christmas Story,” which is full of nostalgia and hilarious in its portrait of a family during the holiday season. When I think of Christmas, I can’t help but think of watching the 24-hour marathon of “A Christmas Story” on TV with my own family. -Tyler Cumella

Voting will close at midnight EST, so be sure to check back tomorrow to see your elite eight, and vote for the next round.

Golden Globe and Emmy nominee Benjamin Wallfisch is the composer responsible for the score of the hit movie IT. I talked to Ben about his approach to scoring the new version of this iconic story and his thoughts on film and music overall. Some very insightful commentary; listen in. END_OF_DOCUMENT_TOKEN_TO_BE_REPLACED

Rupert Gregson-Williams is an award-winning film composer. He just so happened to compose the score for this summer’s big blockbuster Wonder Woman. We talked about his beginnings in film scoring, film scores that move and inspire him and, of course, Wonder Woman. END_OF_DOCUMENT_TOKEN_TO_BE_REPLACED

Jeff Rapsis is a New England-based composer and performer. Lately, he’s been creating live musical scores for silent film screenings. I talked to him about his process and a few of his upcoming performances at The Capitol Theatre in Arlington and the Somerville Theatre. You can keep track of where else Jeff is scoring silent films here. END_OF_DOCUMENT_TOKEN_TO_BE_REPLACED

Planning on seeing Rogue One: A Star Wars Story when it opens this weekend? I joined Adam 12 to give you an idea of what to expect. But don’t worry, I didn’t give anything away. END_OF_DOCUMENT_TOKEN_TO_BE_REPLACED

No, not from afar, from the comfort of her couch. From the actual awards themselves. That’s where Meredith Goldstein was for the Oscars. She shared all the juicy, first-hand details with me. END_OF_DOCUMENT_TOKEN_TO_BE_REPLACED

To celebrate the opening of ‘The Force Awakens,’ I had some very special guests in studio to start the Thursday, December 17 edition of The Brink. Listen. END_OF_DOCUMENT_TOKEN_TO_BE_REPLACED

Watching the new Star Wars trailer a million times gave us all sorts of feels. And one of those feels was nostalgia. END_OF_DOCUMENT_TOKEN_TO_BE_REPLACED

END_OF_DOCUMENT_TOKEN_TO_BE_REPLACED

If you’ve finally finished crying over Inside Out — or Lava, the short that ran before it — Pixar is readying another assault on your tear ducts with The Good Dinosaur, if its newly released trailer is any indication. END_OF_DOCUMENT_TOKEN_TO_BE_REPLACED