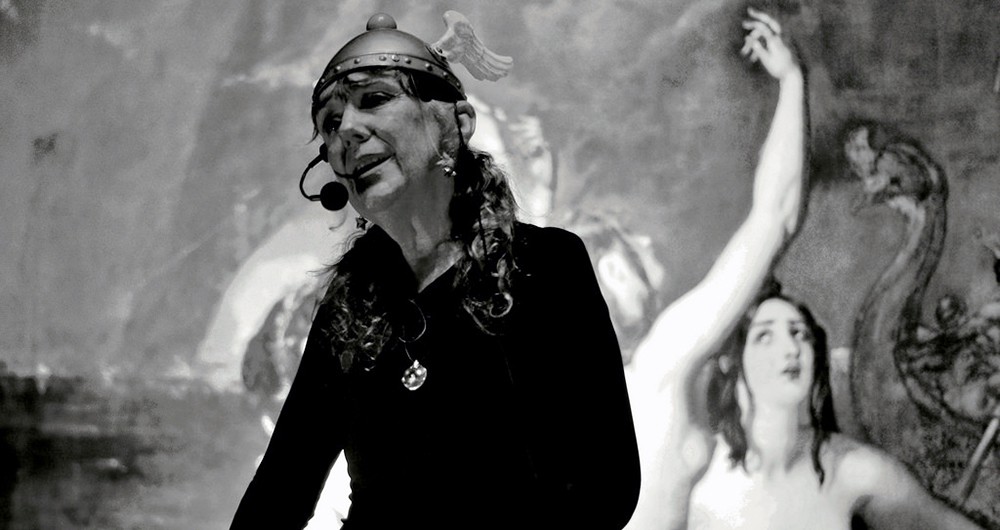 Nick Blakey, who booked this unusual Midway bill, encountered one of these buskers in his youth, and remembered a song of hers that he heard in passing for years. It was the artfulness of her music but also a distinct memory of her persona that stuck with him for all of that time. On Facebook, he describes how music can be something to “carry in the pockets of our memories and our souls like totems of hope, warmth and safety,” and then says “One such thing for me was a song called Synthesize Me.”

Synthesize Me was performed by one of the two artists featured here today, and its melody, musical texture and lyrics infiltrated Nick’s being in 1986. So did the singer’s very particular character. “I never knew [what she] called herself until more recently. I just knew her as the woman with the winged helmet who sang cool songs.” 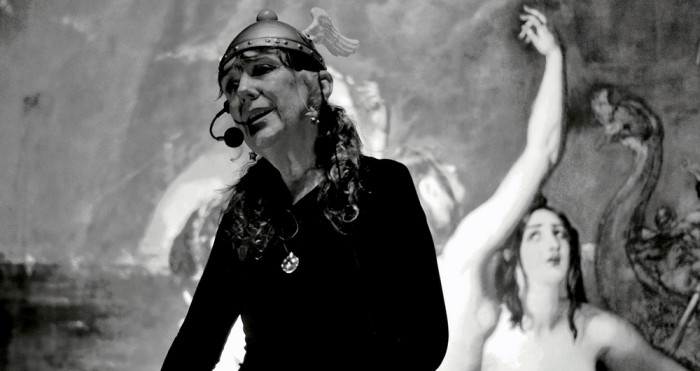 What she called herself was—is—“The Space Lady.” This exotic (one could say almost unearthly…) flower originated in Boston soil and is passing through this week on a bout of touring that has her hitting large swaths of the US and Canada before doing stints in different parts of Europe later this year.

But The Space Lady just started touring about two years ago. Before that she was busking. A lot.

“I started busking [in Boston] in March of 1980 and quit in September of 2000 [in San Francisco]. Then I busked again in 2012, first in Pueblo, Colorado, then in Santa Fe, Albuquerque, and Roswell, New Mexico.”

The word most often used to describe Susan Dietrich’s music as The Space Lady is “ethereal.” It’s an accurate description of her sound.

With some effects, she has an echoey, whispery, silver-sounding voice that feels fixed by gravity only to her Casiotone. But her own description of herself is much more down to earth. So much so that it’s almost jarring.

“’Outsider Music’ artist is a good fit. I used to call it minimalist music, because I had to tailor every song to the limitations of the 3-octave + bass buttons Casiotone…So simplifying the songs down to bare basics became a given.”

The songs she plays are covers, but they feel entirely hers once she’s taken them into her hands. As with donning the winged hat, she takes something that could feel prefabricated and brings it to life—animates it into something that often has more emotional resonance than the original.

“I don’t think it ever suits us well to try to imitate others. The seeming limitations of our individual voices and instruments can work for us, if we use them to our advantage.”

Her busking days started as an alternative to panhandling and trying to sell her art on the street. She, and her husband Joel, who was already a street musician (Joel wrote Synthesize Me—the song that grabbed young Nick Blakey’s attention,) were trying to scrape by underground because he was avoiding the draft and government scrutiny of his anti-(Vietnam) war activism. That’s how long ago this was.

“I had dreamed of being a folk singer since high school. But at first I took up playing accordion…”

When she switched to Casiotone, Joel souped it up with a phase shifter and some echo effects (and lights!) and she started doing “spacey” covers of pop music. With all of her heart.

“I genuinely wanted to move people enough to listen to me, and give me money in return for something they heard that pleased them. Some days while playing to deaf ears for hours on end, I had to tell myself, ‘If only one person donates today, I’ll know I’ve made a contribution to the world.’ And there were days I would literally only make one dollar. Although thankfully not most days.”

As a busker, she says, she wasn’t looking for much. “To be a self-supporting musician was my overall dream, and I was—though it was a hand-to-mouth subsistence for the most part.” But she adds “…what I put out all those tough years as a busker is now coming back to me in spades.”

She found busking educational in the ways that many others have described here. “…My humility, acceptance, and compassion grew by leaps and bounds, because so many people showed it for me.” And it kept her on her toes. “You never know what to expect, from the best to the worst, and still you are required to give from the depths of your soul, and in the public arena where anything can happen.”

And, she admits, that “as much as I am now enjoying playing on stage for attentive, appreciative audiences, there are many aspects of busking that I miss. For instance, the joy of creating unexpected magic for passersby; the open-ended time frame in which I could play every single song I know; the positive feedback from people who recognized a song they hadn’t heard in ages…”

But she doesn’t miss “dealing with bad weather, especially wind and dust; people taking photos or videos and then walking away without so much as a thank you…the constant noise of traffic or subway trains; the struggle to be heard and still not be too loud for the adjacent merchants or upstairs apartments; the legal restrictions against busking…”

Regarding taking things indoors in Boston for the first time, Susan—The Space Lady—is excited to be playing with Keytar Bear. “He is a consummate musician, and very brave to endure those brutal attacks and still keep giving his music freely. He is an inspiration.”

She remembers many Boston buskers fondly—mentioning several by name and then one in particular whose name she can’t pinpoint now. “The one who inspired me to switch to Casio from accordion was a young, blind black man who played and sang as well as Stevie Wonder. He would sit and play in downtown Boston, and he always had a crowd around him….he was so good, and so warm and friendly and willing to share. He had the first battery powered keyboard anyone had ever seen—the same one I bought for myself a year or so later—and he could play up a storm on it, all rhythm-and-bluesy, with a terrific voice to go with it.”

Come toast this unnamed busker who turned The Space Lady on to the Casiotone at The Midway this Sunday, and check out her Facebook page, website or record label for tour dates elsewhere.

Enter to win a pair of tickets to attend The Hess Collection Seminar and Dinner as part of Boston Wine Festival 2018 at the Boston Harbor Hotel on Wednesday, March 14th. END_OF_DOCUMENT_TOKEN_TO_BE_REPLACED

Abe Rybeck, founder and Executive Artistic Director of The Theater Offensive was in studio this morning to talk about ClimACTS! Bounce, which celebrates art loud and proud at Royale on Wednesday, May 3. END_OF_DOCUMENT_TOKEN_TO_BE_REPLACED

Melanie Gillespie is an author and the founder of Mel O’Drama School of Acting in Milton. She was in studio this morning to talk about her latest book Darlene and the Drama Queen and how acting can help kids to develop confidence. END_OF_DOCUMENT_TOKEN_TO_BE_REPLACED

We’re not suggesting coconuts migrate, but we are suggesting that you see Spamalot at North Shore Music Theatre, two weeks only, September 27 through October 9. Click here to grab your tickets, and click “more” to hear my interview with Brad Bradley, who plays Patsy. END_OF_DOCUMENT_TOKEN_TO_BE_REPLACED

You know Dracut, MA native Scott Grimes from television’s American Dad and ER. You know Bob Guiney from The Bachelor and The Bachelorette. But did you know the two are teaming up to raise funds for the Dracut Performing Arts Program? END_OF_DOCUMENT_TOKEN_TO_BE_REPLACED

Boston band Funeral Advantage is Tyler Kershaw. And Tyler Kershaw had a fun childhood, so it seems. END_OF_DOCUMENT_TOKEN_TO_BE_REPLACED

Perry put me on to daephne and the album blew my mind. END_OF_DOCUMENT_TOKEN_TO_BE_REPLACED