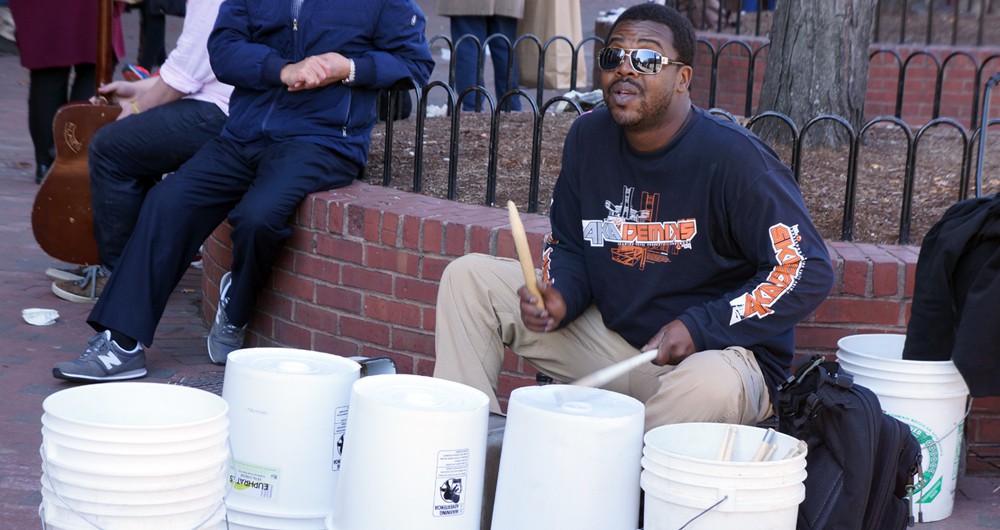 “When I started off playing, I just thought it was something to keep out of trouble.” He says. “I started out on boxes because I didn’t know where to find the right kind of buckets. In Faneuil Hall there was a flowershop down there and the guy that worked there loaned us out some buckets.”

Dave claims, along with an early partner, to be the first “rhythm bucket” player in Boston. There’s no question he’s among the most inventive and energetic bucket (+steam tray, pan lid, oven rack) players in town.

Dave’s sticks hit with resounding power, beating funky staccatos and melodic tones out of the kind of objects that kids play with on kitchen floors. People are hypnotized. And then they burst into fits of dancing.

Some of Dave’s sound is pure speed, some of it flourish, but there’s an element that is just slightly beyond comprehension. “It’s not me. It’s a God given gift. Sometimes people say ‘oh you’re so talented’. But I don’t like to be so bigheaded.”

It’s given him perspective though. Literally. “I’m usually looking up at people.” He says. “I’m on a crate, you know, I’m sitting down and people are standing up so it’s a pretty different view for me.”

We’re watching him, but he’s watching us too, and he’s learned a few things about what we have in common with him.

“When we hear music it draws us from different areas, we all get drawn in. And before you know it there’s a crowd. Music connects people. Our ears hear it first and then our souls feel it. It’s a physical thing that we all share. When we become a crowd, the crowd is the harmony. That’s what we all get out of it. Everyone is together. Nobody knows each other. Nobody called each other and said ‘hey I’ll meet you here’. It’s a spontaneous connection.”

Does he have dreams of playing indoors or “making it big”?

He’ll happily take bookings for parties, weddings (and has divorces listed on his business card too because “You never know”). But his larger dreams have to do with fine-tuning his instruments. He’s been sitting on a question that he says Quincy Jones posed to him years ago when bringing him to play on the now defunct television show Vibe. “’Look, what do you want to do with this?’ he asked me. At the time I didn’t know. But now I do. I wish I could find him.”

Dave thinks it wouldn’t take much to do what he dreams of, but that he’s afraid to do it in a jury-rigged way on his own rather than in a slicker way with a backer of some kind because he’s had his homemade musical innovations copied before. So he’s just going to keep on doing what he’s been doing for now.

“I love doing it, but I wish it could be better, you know? I wish I could do what I’d like to do with it.”

“I want to legitimize the fact that those are buckets and pots and pans. And turn it into what it’s supposed to look like—so it looks more professional. And when people see it they’ll say ‘what is that thing?’ but it will become more accepted.”

If you want to hear Dave, you’ll have to find him by following your ears. He’s not on Facebook and doesn’t have a website or a regular pitch. At the moment, he’s spending a lot of time in Harvard Square and near South Station, but his buckets pack up easy so keep your ears pricked everywhere. And if you can’t find him, he recommends looking for Wacky Chad—he’s no bucket player but apparently wields a pogo stick like nobody’s business.

Enter to win a pair of tickets to attend The Hess Collection Seminar and Dinner as part of Boston Wine Festival 2018 at the Boston Harbor Hotel on Wednesday, March 14th. END_OF_DOCUMENT_TOKEN_TO_BE_REPLACED

Abe Rybeck, founder and Executive Artistic Director of The Theater Offensive was in studio this morning to talk about ClimACTS! Bounce, which celebrates art loud and proud at Royale on Wednesday, May 3. END_OF_DOCUMENT_TOKEN_TO_BE_REPLACED

Melanie Gillespie is an author and the founder of Mel O’Drama School of Acting in Milton. She was in studio this morning to talk about her latest book Darlene and the Drama Queen and how acting can help kids to develop confidence. END_OF_DOCUMENT_TOKEN_TO_BE_REPLACED

We’re not suggesting coconuts migrate, but we are suggesting that you see Spamalot at North Shore Music Theatre, two weeks only, September 27 through October 9. Click here to grab your tickets, and click “more” to hear my interview with Brad Bradley, who plays Patsy. END_OF_DOCUMENT_TOKEN_TO_BE_REPLACED

You know Dracut, MA native Scott Grimes from television’s American Dad and ER. You know Bob Guiney from The Bachelor and The Bachelorette. But did you know the two are teaming up to raise funds for the Dracut Performing Arts Program? END_OF_DOCUMENT_TOKEN_TO_BE_REPLACED

Boston band Funeral Advantage is Tyler Kershaw. And Tyler Kershaw had a fun childhood, so it seems. END_OF_DOCUMENT_TOKEN_TO_BE_REPLACED

Perry put me on to daephne and the album blew my mind. END_OF_DOCUMENT_TOKEN_TO_BE_REPLACED