The Pitch: Getting the Perspective of Keytar Bear 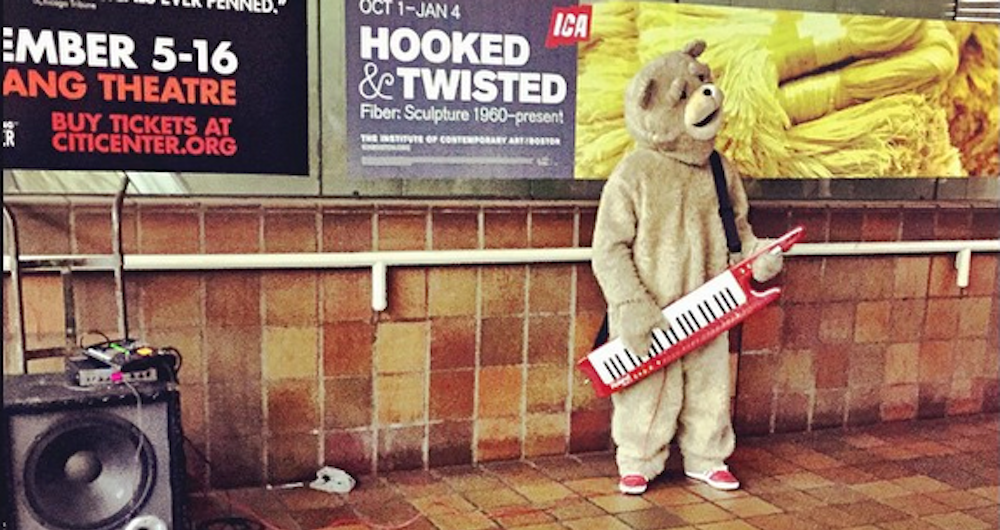 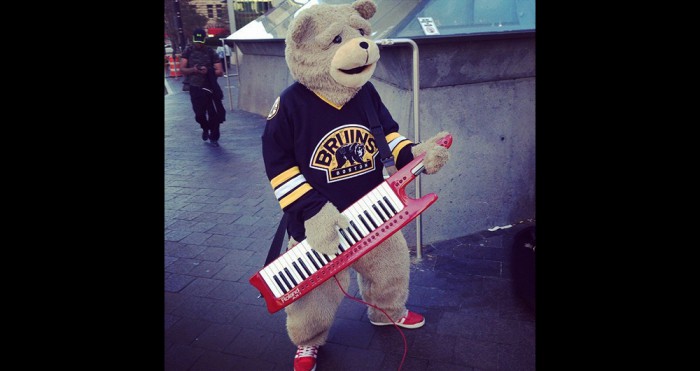 At the moment, Keytar Bear is the biggest busking sensation in Boston. He doesn’t play out very often, but whenever he does, Boston’s social media gets a little viral charge. He’s got a loyal following who jumped to his fiscal defense when he was attacked and his keytar was damaged, and he’s had some attention from the press as well. Keytar Bear’s keytar playing is jammy in a way that walks right up to the edge of jazz, but doesn’t cross over it too much. He plays covers that wildly free associate, showcasing the special qualities of the instrument, but then sometimes he just lets the keytar play itself in the middle of things for a bit while he blows bear kisses to his audiences.

“I bring a little quirkiness, a little comedy, and some serious musician skills all at the same time,” he half-jokes. “So you see the Keytar Bear and you laugh a little bit. Then he plays a certain way and you’re like ‘WHOAH!! this dude is, you know, he’s awesome!’ Something you don’t expect from a bear or a toy or a cartoon.”

Keytar Bear comes off as a little less modest than some of the other buskers profiled here, but when you listen closely, you realize he only talks big in the third person. Keytar Bear is somehow more than the person inside the costume, who admits a little more quietly when asked about how long he’s been busking, “I’m still a rookie.”

Though it sounds like the person inside of the bear may have been busking a bit before the bear costume, Keytar Bear came to be in 2013.

“We had just had the marathon bombings and the Whitey Bulger chase, so I wanted—I was trying to figure out a way to make Boston Boston again, you know? Not just some sad place where you just go to work and come back. I was looking for a way to make people smile again basically. And, of course, to put Boston on the map!”

Again, there’s a playful boastfulness here, that it’s hard to read as too much—especially in light of the altruistic motivation for his busking, and his warmth for the whole range of humanity.

“You learn a lot of patience [busking] because people want to talk to you: the cigarette smokers, the junkies, thieves, then you’ve got the good people. I mean they’re all—we’re all—good people. We all came from the same place.”

Keytar Bear lists the film Beat Street as a major influence on his decision to be a busker and it makes perfect sense. His fellow buskers inspire him too.“There’s this bucket player named Alex Rodriguez at Faneuil Hall. I inspire him, he inspires me.”

It’s not easy to find Keytar Bear in the wild these days. When he plays, it’s usually at Haymarket or Faneuil Hall. Sometimes Cambridge or Somerville. “I don’t stay in one spot for too long because…here’s a fact: people only see the bear twice a month, you know? But they can see me every day because if I’m not entertaining on the street, then I’m online posting just like little things that I find that I think will make people happy.”

So true. His Facebook wall is a nearly endless stream of upbeat weirdness.

When questioned more deeply about his busking habits, a little post traumatic stress (related to two assaults against him that occurred while he was performing) becomes obvious.

But he confirms that he will be playing at the Midway along with The Space Lady on Sunday, April 26.

If you see him playing out in the world, he offers the following advice:

“When you see Keytar Bear, take two dollars out of your wallet and put your wallet in the basket. It’s pretty simple. Nah. All jokes aside, I want everybody to have a Keytar Bear video in their phone. Everybody in Boston. When your train is delayed you can always look back at the video and go ‘ha ha ha I saw him that one day’ and feel better.”

These are words of wisdom, Boston—don’t ignore them! Keytar Bear is making a very simple public policy proposal that could improve our collective quality of life easily. Don’t you want to live in a city where everyone has a Keytar Bear video on their phone?

Enter to win a pair of tickets to attend The Hess Collection Seminar and Dinner as part of Boston Wine Festival 2018 at the Boston Harbor Hotel on Wednesday, March 14th. END_OF_DOCUMENT_TOKEN_TO_BE_REPLACED

Abe Rybeck, founder and Executive Artistic Director of The Theater Offensive was in studio this morning to talk about ClimACTS! Bounce, which celebrates art loud and proud at Royale on Wednesday, May 3. END_OF_DOCUMENT_TOKEN_TO_BE_REPLACED

Melanie Gillespie is an author and the founder of Mel O’Drama School of Acting in Milton. She was in studio this morning to talk about her latest book Darlene and the Drama Queen and how acting can help kids to develop confidence. END_OF_DOCUMENT_TOKEN_TO_BE_REPLACED

We’re not suggesting coconuts migrate, but we are suggesting that you see Spamalot at North Shore Music Theatre, two weeks only, September 27 through October 9. Click here to grab your tickets, and click “more” to hear my interview with Brad Bradley, who plays Patsy. END_OF_DOCUMENT_TOKEN_TO_BE_REPLACED

You know Dracut, MA native Scott Grimes from television’s American Dad and ER. You know Bob Guiney from The Bachelor and The Bachelorette. But did you know the two are teaming up to raise funds for the Dracut Performing Arts Program? END_OF_DOCUMENT_TOKEN_TO_BE_REPLACED

Boston band Funeral Advantage is Tyler Kershaw. And Tyler Kershaw had a fun childhood, so it seems. END_OF_DOCUMENT_TOKEN_TO_BE_REPLACED

Perry put me on to daephne and the album blew my mind. END_OF_DOCUMENT_TOKEN_TO_BE_REPLACED